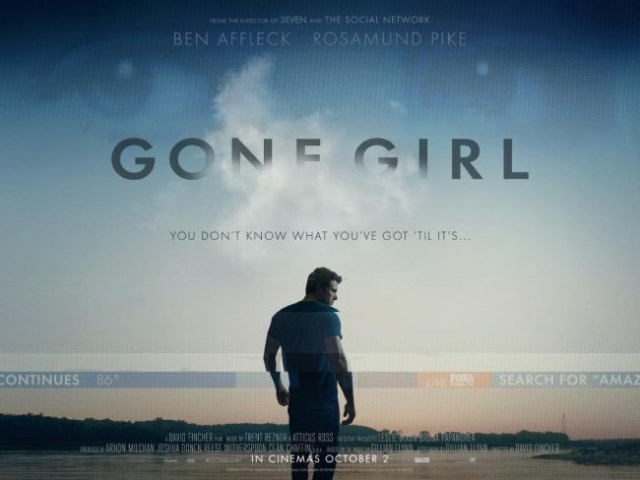 If you were thinking the latest from brilliant director David Fincher, Gone Girl, sounded like a good date movie…do yourself a favor and think again. This isn’t a movie that will so much strengthen your relationship as potentially destroy it.

That said this is also one of the best movies of the year. Ben Affleck shows why he is, in fact, one of the best actors working today and has the ability to play lots of different characters, even within the same film. Affleck’s portrayal of Nick Dunne goes from charming to scary to sympathetic all in the span of the movie’s first 40 minutes and that’s just the first act. And while it’s a transformation that’ll leave you breathless, it’s really Rosamund Pike who steals the show with what might be the most chilling performance in a movie of this type since Glenn Close in Fatal Attraction. Amy Dunne will redefine what “daddy issues” means in your mind and it just might be enough to keep you up at night.

Nick and Amy Dunne have what looks like a great relationship on the surface. But there are lots of problems even their closest friends and family don’t see. And while every relationship has its rocky moments, this one pretty much falls down the hill and off a cliff. At least, that’s what we’re made to think. See, this isn’t just a movie about how there are two sides to every story, this is a movie about how easily manipulated we as a society can be when there’s some “juicy gossip” to be had. And it’s especially true when that gossip centers around the possible murder of a pretty white girl. The media circus that’s created is only one part of the larger canvas that Fincher uses to establish how easy it is to turn the audience on someone with nothing but circumstantial evidence. It’s a genius bit of filmmaking that hopefully serves to show why people should take a hard look at what they consider “news” and then turn it off.

The movie has tons of surprises, but what’s most surprising is how early on it gives you its biggest one. Even so, it turns out that the larger point of the film probably would have been lost if it had been saved for the end. It’s incredibly eerie how familiar some of these scenes look and feel, too. From press conferences to trumped-up news coverage to sudden and surprising character turns, it all might feel a little too close to home for some couples. In the end we’re left with the all-important question: how well do you really know the person sleeping next to you?

If you’re looking for a comfortable, easy-answers, fun romp at the movies, pick a different movie. This one is for the advanced class. This movie will show you there just might be an infinite number of greys out there and that there are, indeed, some truly dark and sinister shades, too.

While the main cast is a tour de force of talent, don’t discount the supporting players in this one. Seeing Tyler Perry, of all people, give a charmingly sleazy performance as defense attorney Tanner Bolt was truly something to behold. He oozes charisma with every word that lets you imagine just how good this guy would really be in a court room. And then there’s Neil Patrick Harris in what is definitely his creepiest role ever. There’s no Barney Stinson here, folks, this is Desi Collings, obsessed ex-boyfriend/stalker/potential psychopath in all his disturbing glory. While there are things worse than him in the movie, he never makes you feel anything but disgust and unease. It’s a true talent that can pull off such a transformation.

It’s easy to look at this movie as a cynical take on modern relationships, but in the end it’s really about how we’re the cynical ones. It’s easy to say the other person is at fault when things go bad and lay blame on everyone else, but it’s how you choose to react to those things that define you. This is a story of two people who reacted poorly and the awful decisions they made that ultimately reveal who they really are at their cores. It’s terrifying, yet refreshingly honest and should spark a conversation that many couples out there probably need to have. That or it might send you running for the hills once all those disturbing thoughts about your lover sneak their way into your nightmares.