DC Comics’ New 52 reboot in 2011 proved to be quite controversial. Through all the ups, downs and in-betweens since that fateful launch, however, one title has proven uncontroversial in its consistency: Batman. Under the stewardship of writer Scott Snyder and penciller Greg Capullo, Gotham’s Dark Knight has finished at or near the top of the comics sales charts each and every month, and reviewers have continually praised the duo’s work in carving their own legacy in the rich history of DC’s second-oldest creation.

Unfortunately, with the release today of Batman #50, the Snyder-Capullo team has only one more issue before departing the book. With 50 issues now behind us, the staff of Place to Be Nation Comics thought it would be an appropriate time to look back at this historic run: the highs, the lows and its place in Batman history. 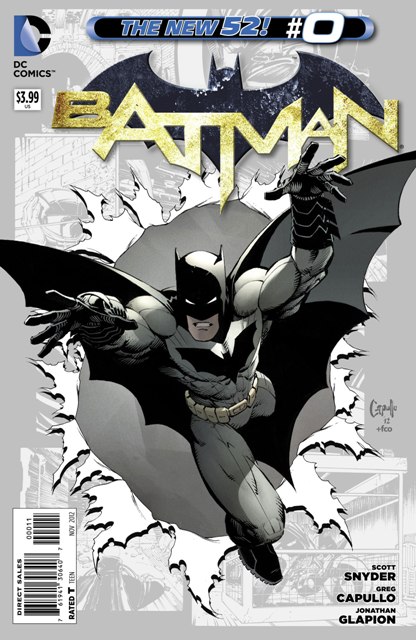 Greg Phillips: My first exposure to Scott Snyder was the collected version of his excellent Detective Comics run, “The Black Mirror.” After reading good reviews and hearing great feedback from people who had read it, I bought it and quickly found it to be one of my favorite Batman stories. It’s still, perhaps, the best Dick Grayson story I’ve read. It’s a tremendous piece of storytelling from beginning to end.

As for Capullo, I’d never really heard his name before the Batman run, but it occurs to me I must have encountered his work when I was a kid reading X-Force. In those days, creator names sometimes stuck with me and sometimes didn’t.

Todd Weber: Before Snyder’s 2011 start on Detective Comics, I had not heard of him. Since then, I’ve read his writing on The Wake, American Vampire, Swamp Thing, Wytches, and Superman Unchained-all of which were excellent.

I had seen some of Capullo’s previous work for both Marvel’s X-books and Spawn, but didn’t really think much of him as an artist before the New 52 Batman run.

Russell Sellers: I first saw Greg Capullo’s work, unknowingly, on the cover of KoRn’s “Follow the Leader” album. I loved it then, but found his comic work much later. I first became enamored with him on an Image title called “Haunt.” He was working with Robert Kirkman on that series and it was a little Spawn-esque, but I enjoyed the character drama more and found it more focused.

Scott Snyder first hit my radar during his phenomenal Detective Comics run. “Black Mirror” might be an all-timer for me. It shows just how good Dick Grayson can be as Batman in the hands of a capable writer and you get James Gordon, Jr. as Grayson’s antithesis. A real missed opportunity there to turn JGJ into Grayson’s Joker. I later discovered more of Snyder’s work: American Vampire, Severed, The Wake and I followed him onto Wytches and of course I picked up Superman Unchained (I don’t give a damn how late it ran!). Basically, if his name’s on it, it’s worth a read. 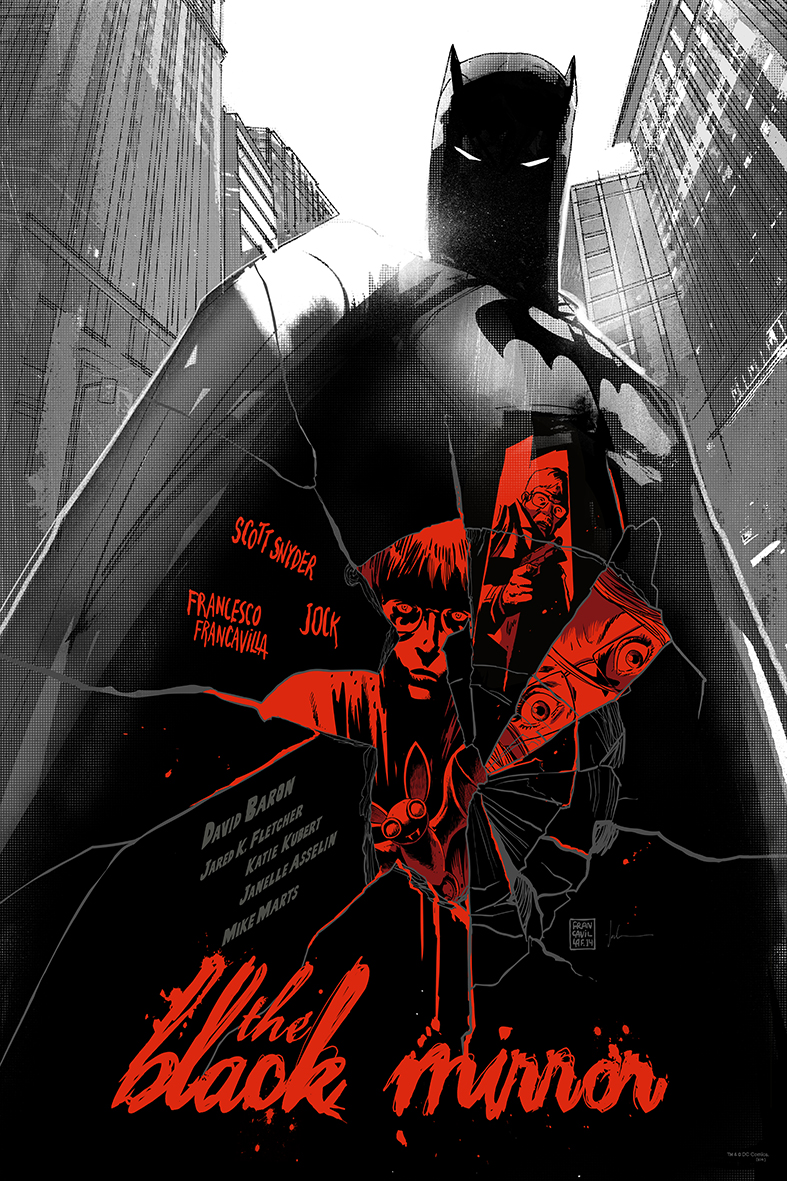 Nick Duke: That’s a tricky question. Was I aware of Snyder before this run or was I aware of Snyder before his first involvement with the character? Obviously, I was a big fan of Snyder’s Detective Comics run that preceded the New 52, and The Black Mirror stands as one of my favorite Bat-stories ever. However, that Detective run was pretty much my only exposure to Scott Snyder. I was aware he was doing American Vampire, but still haven’t read any of it. Capullo, meanwhile, was a name I knew from Spawn and some early Marvel work, but I can’t say I was ever necessarily a huge fan or ever really followed his career.

Greg: I was excited based on the word of mouth surrounding Snyder’s Detective tenure and my … less than enthusiastic view of aspects of the Batman era that directly preceded the New 52. However, I was also disappointed to find out Bruce Wayne would be back as the sole Batman, because I greatly enjoyed the Dick Grayson-as-Batman run, even if some of the stories had issues. It felt like a demotion for my favorite character (which is Grayson, if that hasn’t been made apparent yet in prior columns).

Todd: I was pleased that Snyder’s Batman work was going to continue–seemingly untouched by the New 52 line-wide continuity reboot. I was reading the book before the relaunch and had no reason not to continue.  To be fair to Capullo, I can’t think of a working artist who wouldn’t pair well with Snyder. 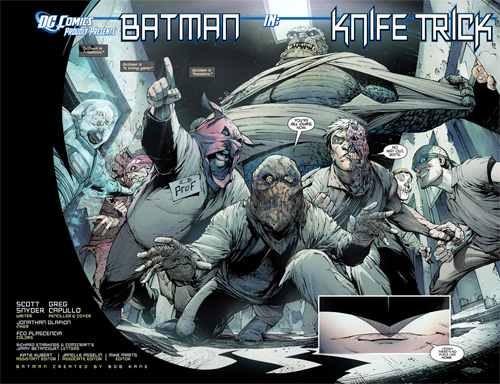 Russell: I said it was bound to be DC’s best book, hands down. I jumped on board immediately and was proven absolutely right.

Nick: As someone who typically pays more attention to writers than artists, I was thrilled with the choice of Snyder, making this a priority book for me. It was one of only a few New 52 titles that I followed from day 1. Capullo, on the other hand, was a bit different. I have to admit I didn’t even know the guy was still working when he was announced. But, old man Frank Miller could have been drawing this book and I was still going to be on board thanks to Snyder.

Greg: It’s really difficult to pinpoint the high water mark for these two, especially since their opening arc, “The Court of Owls,” was such a home run. However, gun to my head, I think I’ll go with the final arc of “Zero Year,” Snyder and Capullo’s bold telling of Batman’s earliest crimefighting days. While the entire “Zero Year” story was entertaining, it was the final, Riddler-centric arc that cemented it as a Batman origin tale that belongs in the same breath as the revered “Year One.” Their rendering of the Riddler is, by a wide margin, my favorite version of that character. Capullo found a way to take an often cartoonish villain and make him seem oddly menacing, and Snyder wrote him in such a way that he seemed a believable opponent for the Bat. It’s great work all around, and it cements their vision of Bruce Wayne and his role in Gotham City.

As an individual issue, it doesn’t get better than Batman #40. The end of “Endgame” also serves as one of the greatest Batman-Joker comics you’ll ever read. I’ve mentioned this before, but it may be the best fight scene in any New 52-era superhero comic. Capullo has never been better than in illustrating the ultimate brawl between these two mortal enemies. 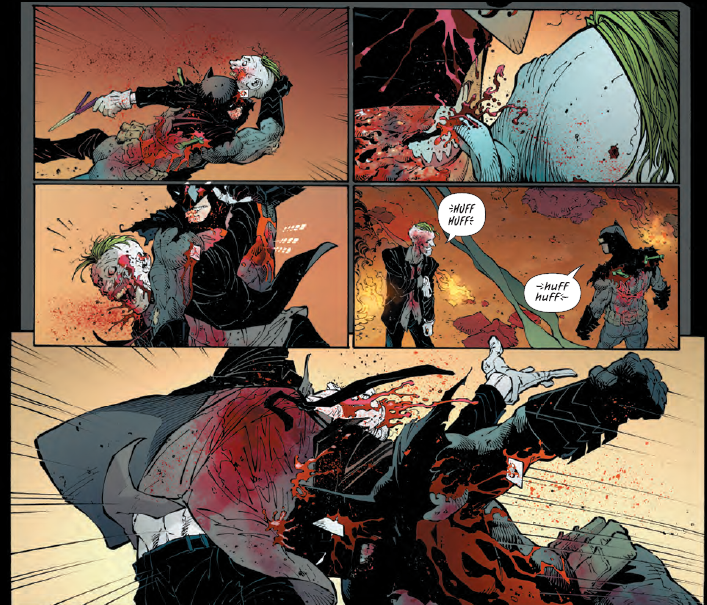 Todd: The Court of Owls story featured in the first arc was the best of all the stories during their run, but by no means did they peak early and then decline. The sideways and upside-down-formatted issue 5, where you had to turn the comic around to follow the story and track Batman as he journeyed through the labyrinth remains my favorite single issue of the run. The vast majority of the 50 issues (as well as the Snyder-penned annuals, zero-issue and villain spotlight) are consistently excellent.

Russell: Their creative high point was probably Zero Year. It was a sprawling epic in every sense of the word. I mean, it didn’t just reinvent Batman, it reinvented Gotham City. That’s probably the biggest contribution Snyder and Capullo will leave us with: a Gotham City that’s as much a character as any hero or villain. That all started from issue #1, too. The Court of Owls is also one of the most intriguing new villain groups in all of comics. Not since Dennis O’Neil’s League of Assassins has a group risen so quickly to capture the collective imagination of Batman fans. They’re going to be around a long, long time.

Nick: I know most will point to the later stories, but for me, it’s still that Court of Owls/Night of Owls epic that spanned the first nine issues. It’s not often you get to add a new spoke to the wheel, and Snyder added one hell of a spoke in the Court and particularly in their lead Talon, who may or may not have a connection to a Wayne family secret. During that arc, I particularly love the issue that has Batman trapped in the Court’s subterranean labyrinth. It’s Capullo’s best work, in my opinion, with the image of Batman’s bloodied eye practically bulging from the cowl still sticking with me almost 5 years later. 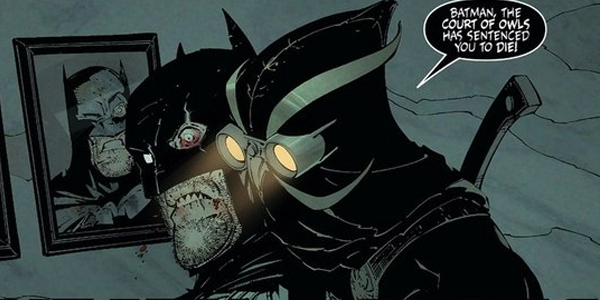