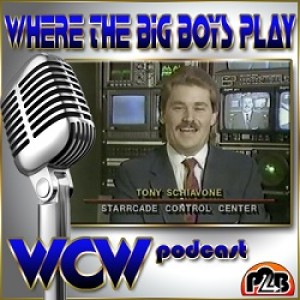 Chad and Parv talk about Bunkhouse Stampede 88. In this show: Chad talks about how he’s basically “the mini Big Boss Man”, some discussion of how tv ratings and PPV buyrates worked in the late 80s, evaluation of the roster at this time and how signing Ted DiBiase and Curt Hennig might have helped Crockett, Larry Zbyszko’s ultimate ambition in life: to win the Western States Heritage title!, young Jim Ross’s intense hyperbole, Chad rants about why Road Warrior Hawk is an idiot and Parv explains why he hates the Road Warriors in general, the mythical book of wrestling records, arguably the worst 10 minutes in wrestling broadcast history, why can’t the Warlord’s arms bend?, after 20 shows Chad finally lays into Dusty’s massive ego, comparison with Royal Rumble 88, and end of show awards.

Chad Campbell is assistant managing editor of Place to Be Nation and co-host of Where the Big Boys Play Podcast. He is waiting for the next Atlanta sports team to break his heart. Send Chad an email