Skip to content
Life Wrestling
Place to Be Nation Staff 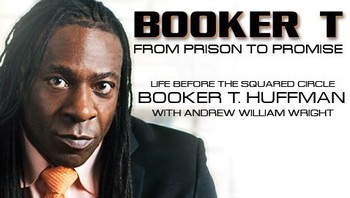 From Prison to Promise: Life Before the Squared Circle is Booker T.’s first attempt at an autobiography. Although it is a relatively short book, it offers a lot of insight into the life of the former 6-time World Champion.

Now, before you get your hopes up, I will tell you that if you are looking for a detailed book on his career a la the autobiographies of Mick Foley, Chris Jericho, etc., this isn’t what you are looking for. Although Book does touch on his wrestling career, that is not the focus of this book (more on that in a bit).

Instead, this focuses on all of the years of his life prior to wrestling, and the extremely rough life he had in his formative years. Now, we all know the story of Book getting arrested for robbing a Wendy’s, but that is just the tip of the iceberg. Book has had one of the hardest lives I’ve ever heard of for a wrestler, and it’s honestly sometimes amazing he went onto to have such a successful life and career. Right off the bat, Book lost his dad, Booker T. Huffman, Sr. at just 10 months-old, never meeting the man. In his teens, his mother died, and he was left raising his sister by himself, as his other sisters and brothers had all moved onto other things in life. One sister got him involved in marijuana and dealing drugs during these years, which is where his downward spiral began.

From there, Book reveals all of the details leading to his infamous arrest, as well as his time in prison (which was cut short, thanks to time off for good behavior). Book isn’t shy about his time in prison, and in fact calls it one of the most influential times in his life. He reveals all of the things he learned there about standing up for himself, as well as developing an interest in weight training, which allowed him to gain considerable bulk on what was originally a relatively small frame. It was during this point that Book decided he was done with a life of crime and vowed to change his life around once he got out of prison, something he was successfully able to do and never once had a relapse.

Book also goes into great detail about rekindling his relationship with older brother Lash, who fans know today as Stevie Ray, the other half of Harlem Heat. Thanks to Lash’s influence, Book was able to begin a life as a responsible adult, holding down a good job, keeping up his physical health and eventually leading to a career in the squared circle.

While many of the parts are sad and depressing (his parents dying, losing contact with the rest of his family, dating the daughter of a famed cult leader who later killed herself after he dumped her), there is a lot of humor and interesting facts to be found. For example, Book and Lash were actually long-time friends with future WWF star Tony “Ahmed Johnson” Norris prior to any of them being involved in wrestling. Also, Book reveals that he has no clue what his middle initial “T” stands for, and even his mother didn’t know, saying it stood for “To-be-determined-at-a-later-date”.

As I said, there isn’t much about the wrestling career here, but it’s not completely ignored. Book does talk about training under Ivan Putski down in Texas, and he isn’t shy about his true feelings about “Polish Power”, more or less calling the guy a fraud and giving most of his training credit to Scott Casey instead. We also learn about his time in the Global Wrestling Federation and the racism he and Lash had to deal with in the beginning, thanks to the ultra-conservative views of Texas wrestling fans at the time. Although these chapters only take up a small part, Book crams a lot of information into them and reveals a lot about his career in a short amount of space. The book ends right as he signs with WCW, which is disappointing. However, Book hints that he’s not done telling his story, all but guaranteeing a sequel is on the way.

Overall, it’s a fascinating journey and really offers a lot of insight into the life of the WWE Hall of Famer. I’ve always had a tremendous amount of respect for Book, but after reading his autobiography and learning what he had to go through to get where he is today, my respect has increased greatly. I encourage all fans to pick up this book. It’s relatively cheap on both Kindle and in physical form (I got mine on Kindle for free), and it’s a very fast read that you can go through in a couple of days. Despite its brevity, Book crams a lot of information into it, and it never feels overcrowded. He writes in a very intelligent, coherent and funny matter, and is not shy or afraid to pull punches when it comes to his personal life.