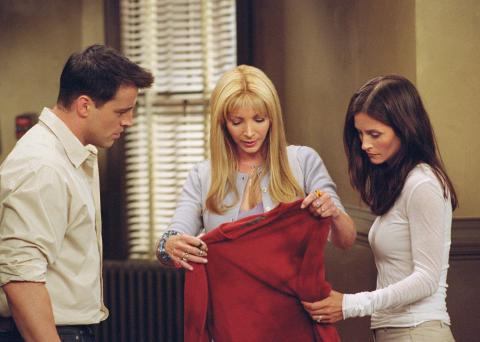 Ross and Rachel were the ultimate on again, off again couple of 90s/early 00s sitcom TV. Apparently, somewhere late in season 7, they had a random fling, and though still technically off again, that fling, led to a pregnancy for the couple, a pregnancy that was the focus of season 8.

In The One With the Red Sweater, we already know that Rachel is pregnant. What we don’t know is who the father of the baby is. Rachel recently dated the much younger Tag, and he was the obvious suspect, but viewers were rooting for Ross, no matter how out of left field it may seem.

Storyline A focuses on Rachel’s dilemma of when and how to tell the father. Meanwhile, the gang works out their theories on who the father could be. Joey mentions that Rachel hooked up with a guy recently, and though he didn’t see his face, he noticed that the man left his sweater at their apartment. Phoebe thinks the sweater belongs to Tag, because he does in fact own the identical sweater, and sneakily sets up a meeting between Tag and Rachel so that Rachel can talk to him about the baby. That conversation, is of course, a dead end, because Tag is not the father. The big reveal comes right at the end of the episode when Ross sees the red sweater hanging in Monica’s apartment and says: “Hey my sweater! I’ve been looking for this for like a month!” He exits the apartment immediately after, leaving the gang in shock, and himself completely in the dark about the baby. Even if you could see that he was the father from a mile away, it was still a cool reveal, and very classic Ross.

Storyline B involves Monica, Chandler and Ross. This episode comes on the heels of Monica and Chandler’s Wedding. Monica is depressed that she is no longer a bride, and just someone’s wife. This episode also seems to be a kick off point, to me at least, to Monica being not just kind of irritating sometimes, but also a mean spirited shrew. I always thought I just didn’t really care for Monica ever, but in re-watching the whole series, I realized she’s lovable in the first few seasons, boring with Chandler, and then a stereotypical nagging wife in the last couple seasons. It’s sad to see her slow transformation from quirky and adorable, to neurotic, annoying and witchy. Anyway, in this particular episode we see her miserable and trying to make herself happy by opening all the wedding gifts without Chandler. Meanwhile, Chandler dropped the ball on collecting the disposable cameras at the wedding and seems to have misplaced them, so he recruits Ross to help him find them. When that task seems impossible, Ross suggests, to avoid Monica’s wrath, taking pictures at another wedding to trick Monica into thinking the photos were not lost.

My favorite joke of the episode was a small and quiet one, but I always loved when everyone made fun of Ross for being married three times.

Ross: Do you really want to start your life together by letting her down?