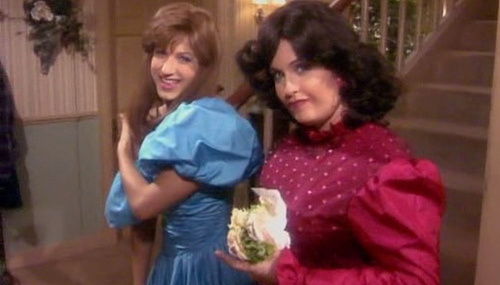 Season one was filled with Ross pining over Rachel, and her being completely oblivious to his pining – she may also have been slightly distracted by sexy foreigner, Paolo, but he was sleazy, and honestly, not that attractive, so we don’t like talking about him. Anyway, at the end of that season, Rachel finally wakes up to the fact that Ross is crazy about her, and also realizes that she kind of has a thing for Ross as well. Unfortunately, it is at the same time Ross is in China falling for Julie, which leads to that crushing and awkward scene at the airport where Rachel is waiting for Ross with a bouquet of flowers that she gets to give to his new girlfriend. Why are the gods so cruel?!

Fast forward a few months, Rachel is pining over Ross and Ross is the oblivious one, until one night Rachel gets drunk and reveals her feelings in the hilarious seventh episode of this season: The One Where Ross Finds Out. That episode was such a close runner-up to the one I have chosen as my fave: The One with the Prom Video. Ross and Rachel’s first kiss at Central Perk was awesome, but it was a tease. Their lip-lock after the prom video moment in Monica’s apartment was the start of something real.

After, the infamous list incident (the pros and cons of Rachel and Julie, written by Ross Gellar under the poor advice and aid of Joey and Chandler), Rachel gets it into her head that she and Ross just can’t work. It’s too hard. Boo hoo. So, Ross is sad, Rachel is sad, the nation sheds a tear. Phoebe, however, has hope because Ross and Rachel are meant to be, like lobsters. The adorably funny bromance sub-plot of this episode is a welcome distraction. Joey is finally making some money from working on Days of Our Lives, so he buys Chandler a gift, a hideous gold chain bracelet that Chandler secretly hates.

I believe the episode still stands the test of time. There is one scene where Ross tries to “rescue” Rachel from a flirtatious encounter with a coffeehouse patron by pretending he’s her blind date, mentioning how pretty she said she was in her ad. Kids these days are all about Tinder, Craigslist, and Match.com. No one is taking out personal ads in the paper. Other than that, and as always, the show focuses on the friendships.

The bracelet subplot is definitely amusing, with great comedic execution from Matthew Perry and Matt Leblanc, even though the story itself is a little too classic sitcom. Joey tries to do something nice for Chandler by purchasing the bracelet, which represents that they are “best buds” – which is engraved on the bracelet – Chandler secretly hates the bracelet, and Joey finds out and is hurt. Chandler then loses the bracelet, and has to buy a duplicate to prove to Joey he actually really does love it, and then the original bracelet surfaces leading to the obvious existence of two ugly engraved gold bracelets, that Chandler explains away by saying he bought the other bracelet for Joey. To which Joey says, “Check it out! We’re bracelet buddies!” and Chandler sarcastically and hilariously replies, “That’s what they’ll call us!”

Phoebe takes best line of the episode when reasoning out to Ross why he and Rachel will be together in true kooky Phoebe fashion, “Because she’s your lobster.” The line is even more satisfying at the end, after everybody watches the prom video, where it is revealed that Ross set out to be Rachel’s knight in shining armor, by being her date to the prom when it looked as if her date wasn’t going to show, but then of course her date did show, and no one ever knew of Ross’s kind gesture and silent heartbreak. Rachel said nothing after the video ended, she merely walked straight up to Ross and kissed him. The gang was all there, and thrilled to see their friends making out. Phoebe, so satisfied with herself, and the situation says, “See? He’s her lobster.”