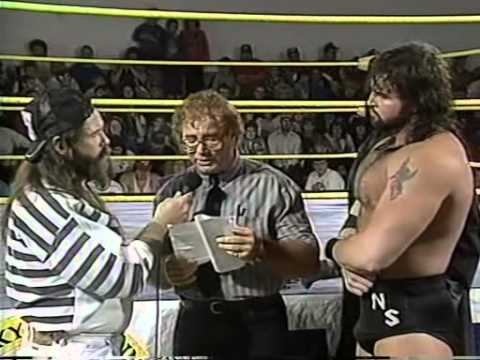 NEW Episode of Fire in the Mountain covering SMW TV’s 39, 40, and 41 from Haysai, Virginia. Topics covered by the hosts:

– Did Justin just compliment Brian Lee?
– Did the Grim Reaper throw ashes in Lee’s face and why is that so wrong?
– The Garvin/Orndorff thing gets into much weirder territory
– Danny Davis, at home, stroking his……….kitty cat
– The Master certainly doesn’t disappoint. Best angle so far in SMW?
– Did Brian Lee and the Nightstalker have a legitimately good match?
– Robert Gibson’s mother is a deaf mute and Cornette buries her
– Ring around the rosie with Tim Horner and Ron Wright
– Logistics of Gibson getting from the airport to Haysai