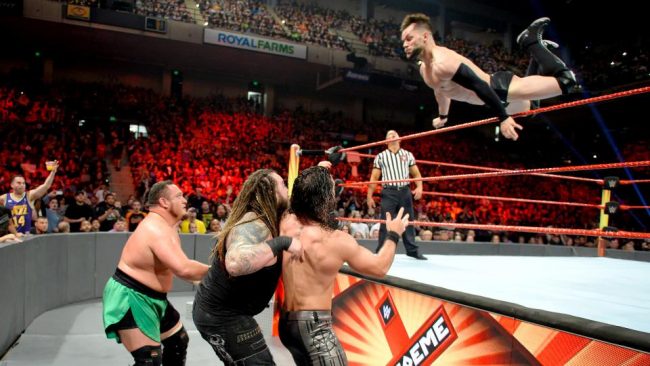 It’s time for the seventh WWE Network Special Event – and the third Raw-branded show – of the year, as the company takes things to the EXTREME!

WWE Extreme Rules 2017 was live tonight from the Royal Farms Arena in Baltimore, Maryland. Historically, the Extreme Rules show is a place for feuds to be blown off with some special stipulation matches, and we have a fair share of those tonight, including a headscratcher for the Intercontinental Title. What isn’t being featured on the show is Raw’s main title – the Universal Championship – as titleholder Brock Lesnar is not scheduled for the show. The main event, however, is an Extreme Rules Fatal Five-Way to name the new number one contender.

I’ll be honest: I haven’t watched much of anything on Raw for a few months now, following along online to see what was happening. On paper, the card looks like it could be fun. Let’s get into it!

Kalisto vs. Apollo Crews – I wasn’t expecting much from this match, as I haven’t really been paying attention to the story going on between Kalisto, Crews and Crews’ manager, Titus O’Neill, but these two guys had a solid match to open the show. Kalisto was flying all over the place and Crews was keeping up with him pretty impressively. Classic heel miscommunication between Crews and Titus leads to Kalisto hitting his finisher and getting the win. It was a little cheap, but I get it. It protects Crews a little bit and allows for a rematch down the line. After seeing this match, I wouldn’t mind seeing more of these guys competing.

Intercontinental Title: Dean Ambrose (c) vs. The Miz – The gimmick here is the antithesis of EXTREME – if the champ gets disqualified, he loses the Intercontinental Title to the Miz. It’s a dumb stipulation that works with The Miz’s character, who has been one of the best parts of WWE for a while now. With this feud dating back to when both guys were on SmackDown! Live, they’ve got a lot of history and a lot of time to get the match down right. The problem with matches with the DQ stipulation like this, though, is that the stipulation completely overtakes the match.

While the stip was a big part of the match, Ambrose and Miz crafted a smart match that used it to their advantage, with Miz trying to outwit both the champion and the referee, and his chicanery finally paying off as the ref had to think about whether or not to DQ Ambrose after Miz threw Ambrose into the referee. Miz hit the Skull Crushing Finale and gets the pin and the title in one of the best Intercontinental Title matches in recent memory. Great match to kick off the card.

Mixed Tag Match: Rich Swann and Sasha Banks vs. Noam Dar and Alicia Fox – The mixed tag match combines the women’s and cruiserweight divisions, giving both a second match on the card. Swann and Banks are former champions of their divisions who have fallen down quite a bit if they’re in a mixed tag match with no stakes. The only thing extreme about this match is how extremely unnecessary it is. After Banks hits Dar with some double knees off the top to the outside, Swann follows up with a phoenix splash for the win. That match was just there – nothing offensive but nothing to go out of your way to see, unless you count Banks’ dancing when the match was over.

“The Drifter” Elias Sampson comes out to perform. But really, who cares?

Kendo Stick on a Pole Match for the Raw Women’s Championship: Alexa Bliss (c) vs. Bayley – These two have a lot to make up for after a terrible “This is Your Life” segment on Raw, but I can’t think of the last time an “on a pole” match has ever been good. Bayley is looking for revenge here and the story of the match is whether she can get extreme enough to regain the title. On a positive note, they didn’t waste any time getting the kendo stick off the pole, so we didn’t have to wait long for some violence.

Mercifully, the match doesn’t last that long, either, as Bliss hacked away at Bayley with the stick and, despite a brief comeback, managed to put the former champion down. I’m still not a huge fan of Alexa Bliss, but she’s improving with each match and this one was short enough and gimmicked enough to hide her flaws. Bayley is likely out of the title picture for a bit, as Nia Jax called the winner during the pre-show. It’s probably for the best, to allow her to get some of her groove back after losing a lot of her momentum the last few months.

Raw Tag Team Championship Steel Cage Match: The Hardy Boys (c) vs. Sheamus and Cesaro – This is escape rules, meaning both members of the team need to get out of the cage to win the match. I’ve never liked this stipulation, because if one team member gets out of the cage on his own, it leaves his partner at a 2-on-1 disadvantage to get beat down. And we get that set-up, as Jeff Hardy drops down after escaping an armbar from Cesaro and the former champs could beat the crap out of Matt. And that led to Jeff coming back in for a Whisper in the Wind from the top of the cage onto Cesaro and Sheamus. He’s a lunatic. The reset doesn’t last long, though, as both teams go for the escape – the Hardys through the door and Cesaro and Sheamus over the top. Matt couldn’t drag his brother out fast enough, though, and the Cesaro and Sheamus regain the straps.

Good action throughout, but I really think the escape stipulations on a tag team steel cage match hurts the flow. I’d say it’s time for both teams to move on, but where do they go from here?

Cruiserweight Championship Submission Match: Neville (c) vs. Austin Aries – Neville and Aries have had some great matches this year and have raised the level of the cruiserweight division, with Neville finding ways to keep his title despite Aries coming close in each match but just not getting there. The pair have another great match, following the same format as their previous title matches, with Aries coming close. But as “Mean” Gene Okerlund was fond of saying, close only counts in horseshoes and hand grenades, and Neville gets Aries to tap. This series has done a great job of establishing Neville as a force to be reckoned with in the Cruiserweight division and whoever ends up beating him should get one hell of a rub.

Extreme Rules Fatal Five Way Match For the Number One Contender to the Universal Championship: Roman Reigns vs. Seth Rollins vs. Finn Balor vs. Samoa Joe vs. Bray Wyatt – WWE Universal Champion Brock Lesnar hasn’t appeared on pay-per-view since winning the title from Goldberg at WrestleMania, and all the big names on Raw have been involved in other programs, so we finally get a match to establish a number one contender. Balor is the only former Universal Champion in the match, but Reigns, Rollins and Wyatt have all held the WWE Title. I like the fact that Balor came out as himself and not THE DEMON, leaving something for a future big match.

Bray Wyatt and Samoa Joe forming an alliance to dominate the other competitors was a great touch, as the two biggest guys in the match worked to eliminate the other three. And it would have worked, too, if not for that scrappy Finn Balor, who broke their momentum and allowed for Roman Reigns to take over. The match quickly devolves into a typical WWE multiman match, spotlighting two people at a time while the others lay around the ring instead of fighting each other. At least we know Reigns managed to get his regular nap in. Especially after a sick-looking kick to the head from Balor. That looked like it hurt. Reigns got his receipt, though, hitting a spear on Balor and Joe that took them all through the barricade.

Seth Rollins, not wanting to be left out, then leaped off the top rope and on top of Bray Wyatt, putting them both through an announce table and seemingly messing up Rollins’ knee. So, everyone is down and the only action came from the replays. The demolition set up a Shield show-down, with Rollins and Reigns the first back to their feet. The face-off leads to the finishing sequence of everyone getting their spots in before Samoa Joe slaps the Coquina Clutch on Balor for the win.

Final Thoughts: Really good show with nothing that was terrible. Even the pre-show match delivered, which is pretty rare. Samoa Joe winning the main event means he gets a Universal Title match against Brock Lesnar in 5 weeks at the ridiculously-named Great Balls of Fire, and the concussive force of that match should knock out the first two rows of fans.