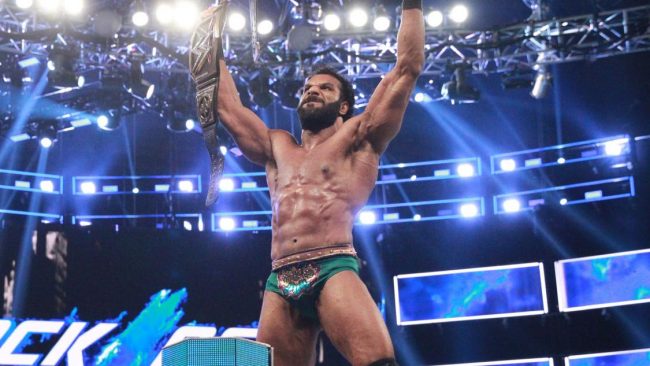 Coming to you LIVE on the WWE Network from the All-State Arena in suburban Chicago, Illinois (Rosemont, for those unfamiliar with the area), the action kicked off with the pre-show that featured our first match of the evening.

Tye Dillinger vs. Aiden English – English, formerly of the Vaudevillains, is on his own after his partner, Simon Gotch, got fired, and he’s back to his old singing gimmick. He’s got a voice for Broadway, but no one is putting his name on the marquee any time soon. Dillinger, on the other hand, gets the crowd shouting “TEN!” which is probably my least favorite gimmick ever. Thankfully, the chanting doesn’t get too out of control, though Aiden English still cries a bit before eating a pin and Tye gets the first of what I’m sure will be many main roster pre-show wins.

Shinsuke Nakamura vs. Dolph Ziggler – This is Nakamura’s SmackDown! TV debut, as he’s been doing dark matches since coming up to the main roster. Ziggler is a good choice for his first opponent, because the Show-Off will make him look like a million bucks. Hopefully, Nakamura can be more than just a cool entrance, because he stopped being impressive on NXT a while ago. Surprisingly, Ziggler got a lot of offense in here, keeping the debuting superstar on the ropes for an extended – and probably unnecessary – heat segment. The ending was never in doubt, but they took too long for Nak to make his comeback. Kinshasa ends it and gives Nakamura the win.

SmackDown! Live Tag Team Titles: The Usos (c) vs. Breezango – Tyler Breeze and Fandango have had a renaissance with their Fashion Police bits, and Breeze is “undercover” here as a janitor, complete with mop, and then an old lady and gets some comedy segments that would have made Santino proud. It’s more entertaining than it has any right to be. Thankfully, once the granny costume gets stripped, the four guys tear it up for a bit before the Usos got the advantage and never let go to retain the straps.

Baron Corbin vs. Sami Zayn – Sami Zayn lobbied for a switch to SmackDown! from Raw to harness more opportunities, but he’s been portrayed as nothing but a nuisance to the rest of the roster. Corbin, on the other hand, seems to be getting the slow build to something big. Sami has lost a lot of his shine since coming up from NXT and immediately feuding with Kevin Owens. He’s had nothing to do since. And his matches have been nothing special. Zayn and Corbin build a nice little match, though, that ended with a surprising win for the otherwise directionless Zayn after a Helluva Kick. Don’t really know what that’s about, but I assume it’ll lead to some rematches between the two.

Naomi, Charlotte Flair and Becky Lynch vs. Carmella, Natalya and Tamina – Carmella, Natalya and Tamina are known as “The Welcoming Committee,” which may be one of the worst group names of the modern era. The most entertaining part of the group is definitely mascot James Ellsworth, who calls the Chicago crowd “sausages” before the match. Charlotte, who excelled as the lead female heel on Raw, seems equally comfortable on the face side here, which may cement her as one of the best ever. Another surprising result here, as Natalya managed to get Becky to submit to the Sharpshooter to, I guess, elevate her to top contender to Naomi’s title? I don’t know, this result makes little sense.

United States Title: Kevin Owens (c) vs. AJ Styles – The entrance ramp for champ Kevin Owens is fantastic. This is a battle between the best parts of Raw and SmackDown since the brands split last year and it’s a damned shame that these guys are fighting here for the U.S. Title instead of the WWE Championship, because either man would be worthy of the company’s top title right now, especially considering who’s in the title match tonight. AJ and KO spend the match beating the living hell out of each other and the Chicago crowd seems to appreciate the effort both men are putting in. Styles hits the Phenomenal Forearm outside, but gets caught between announce tables when trying to hit the champ with the Styles Clash, allowing Owens to get in the ring to win by countout. It’s a unique way to end the match without really hurting either guy, and I hope we get a rematch, because that was fun. With a clean finish, it could be even better.

Erick Rowan vs. Luke Harper – Because the WWE can’t figure out what to do with the former members of the Wyatt Family without having them fight each other, we get Harper and Rowan going at it again. At least Rowan showed some personality on Talking Smack last week. That’s something new, I guess. The crowd didn’t seem into this at all and, honestly, it nearly put me to sleep, too. Harper hits the discus clothesline for the win and we can only hope that these guys never fight again, but that’s probably a pipe dream.

WWE Championship: Randy Orton (c) vs. Jinder Mahal – When I discussed this match during The Main Event podcast at Place to be Nation (listen here or follow the PTBN feed on iTunes), I said the match should consist of the bell ringing, Orton hitting an RKO and pinning Mahal for the win. Mahal – formerly “the funny one” in jobber group 3MB – was last on a big event getting beat by Mojo Rawley, with help from New England Patriot Rob Gronkowski during the Andre Battle Royal at WrestleMania. I can’t believe he’s supposed to be considered a serious contender to the WWE Championship. AND THEY PUT THE TITLE ON MAHAL!

Well, I suppose it makes history, but I don’t really see how it makes sense to put the most recognizable title in the industry on a guy who was most comfortable looking up at the lights just a few weeks ago. I don’t think it’s a stretch to say Jinder is probably the weakest WWE Champion in quite some time.

So, where do they go from here? Orton doesn’t need another title reign, but that doesn’t mean he won’t get one. Guys like Owens and Styles DO deserve reigns. Even a guy like Rusev is more worthy of a WWE Title reign than the guy who currently holds the championship. I do think it’s too soon to put the belt on Nakamura, but it’s not completely out of the question.

It’s appropriate WWE decided to pull the trigger on this title change at a pay-per-view called “Backlash,” because I imagine they’re going to get one after this.

Next up is the Raw-branded show, EXTREME RULES, in two weeks, featuring a Fatal Five Way for the No. 1 contendership to the Universal Championship, held by a guy who hasn’t been on TV in weeks.