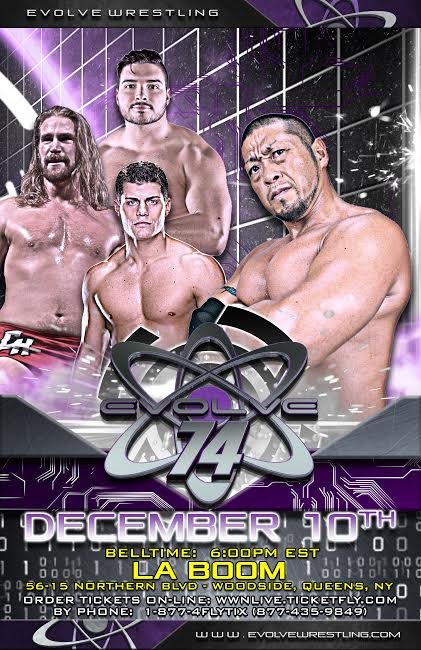 This show is the start of an action-packed weekend with two EVOLVE shows and a BEYOND show all on FloSlam, plus other events like CZW Cage of Death.

The show starts with Lenny Leonard in the ring welcoming everybody to the show. There is something about starting a show with the announcers talking that just feels right.

I signed up for BEYOND on Demand a few months ago and Jaka was one of the few guys I really fell for, just feels like a really untapped talent. A bigger guy with a lot of noise and force into his work. He’s taking on Drew Gulak (from the WWE) with his amazing theme music.

If you like grapplefuck mixed with some incredibly stiff shots, this may be the match for you. They laid it all out here with snug submissions and killing each other with chops and kicks, where neither men could gain an advantage too long. The nearfalls were very dramatic especially the one off of Jaka’s spinning heel kick in the corner. After another intense strike exchange, Gulak choked out Jaka. A great showcase for Jaka, thanks to Gulak.

Larry Dallas appears post match and asks Gulak if Catch Point is really dead. Gulak says it is and wants to be the champion here. This brings out Tracy Williams who tells Gulak that Catch Point is not dead. Dallas interrupts to let Williams know he’s in Gulak’s shadow. The tag titles shows Williams is not in anyone’s shadow. Gulak walks away and I can’t wait for their match tomorrow at EVOLVE 75. Larry Dallas is fine stirring up shit here and this was smart to build towards tomorrow.

I enjoy Dickinson for what he is, he’s a real beast in BEYOND. Chuck Taylor, now DUSTIN, was always good for a laugh in IWA-MS, however feels out of place in EVOLVE. One thing DUSTIN does bring is being a legit heel, which is difficult on the indies.

This match was here to make DUSTIN look like a legit challenge to Chris Hero tomorrow night. Dickinson kicked a lot of ass, and DUSTIN was slimy and got his offense that way. Finish came when Dickinson went for a top rope Death Valley Bomb, but DUSTIN slithered it into a counter and an Awful Waffle for the win.

If you haven’t seen Allin, you need to see Allin.

This started off with a bang, as Cage was making his entrance he got nailed with a dive. The high flying from Allin is just out of this world stuff, including an incredible coffin drop. Although one of his dives was countered into a vertical suplex to start the Machine’s power offense which continued the David vs Goliath story they were going for.

There was an incredible hope spot by Allin, as he moved out of the way of the charging Cage and went to the top rope, only to be chucked into the guardrail. The crowd was really into the classic story as the power kept Cage in control, but his cockiness led to hope spots.

Cage then tells the crowd from one section to move out of the way which leads to him tossing Darby onto the stage in the second row. Darby Allin may be dead or insane, or both. As the referee got to the 19 count out, Darby dived to try to get into the ring, but he was too dead and got counted out. Just an incredible spot match with a great story and crowd.

After the contest Ethan Page and The Gatekeepers come to the ring. Brian Cage shakes their hands. Page gives Cage a cheque, since he paid him off to destroy Allin after Allin got into Page’s business in the past. Page cuts a pretty good promo running down Cody Rhodes and calls him out here to start their match.

This is actually the first time I watched a Cody match since he left the WWE. Let’s see how the newest member of The Bullet Club looks in EVOLVE.

A really weird contest, as early on it was comedy and stalling. Page was really great flipping off fans and Cody. Then we settle into an okay match. Referee bump and Brian Cage attacks Cody, but referee wasn’t up in time to count. Low blow by Cody, Cross Rhodes and he sneaks out a victory over Page.

The Rivarly Comes to EVOLVE: Matt Riddle vs Jeff Cobb

The story is they fought in other promotions and it’s awesome, so now this match will take place in EVOLVE!

What do you get when a former Olympic wrestler who is a power house takes on a former MMA fighter with unlimited charisma? Well, you get this awesome match!

This was a fight where both men just threw everything they could at each other. It didn’t go too long, but felt like a legit battle. Cobb counters a move by Riddle with the Tour of the Islands for a shocking win in his EVOLVE debut. This ruled and I hope this is the future of wrestling.

At this point the power in my building went out! It came on and it’s time for the tag titles match. Seems I missed a fun Stokley Hathaway promo, so that sucks.

Catch Point got dumped by Drew Gulak and then proceeded to win the titles at EVOLVE 73, now they are facing a huge challenge here in Ricochet & Kaasa. Kasaa’s mullet is really great here!

Yehi and Ricochet have amazing chemistry and all of these guys are awesome is the clip notes from this match. This wasn’t your southern style tag, as there was no long face in peril segments or anything, but what you did get was all action with spectacular spots. Catch Point and the Kasaa & Ricochet team are a good contrast. Grapplefuck vs high spotters lead to an awesome spot fest.If you are into that style, you will love this.

The finish comes when Kasaa goes for the Shooting Star Press, but Williams moves and locks on the Crossface for the submission.

A few minutes into this great match that was building like an old school All Japan classic, the stream went dead, for everybody. We probably missed about 5 minutes there.

Dick Togo took the short piledriver here and wobbled around, then hit a dropkick before passing out. That’s a new take on the no sell of a piledriver spot that I absolutely love and why Togo is an all-timer.

Hero keeps control for awhile with some great forearms and nearfalls, until Togo does an amazing fired up comeback eating forearms and flipping Hero off. A Pedigree by Togo gets 1, which leads to him going for the kill. Kicks, second Pedigree and then the HUGE SENTON by Togo gets the win! Obviously I will have to rewatch this, but it felt like an epic.

After the match Hero praises Dick Togo for awhile and calls EVOLVE special. DUSTIN comes out with a chair and wants to fight now. Hero slaps him and walks away, they will wrestle tomorrow night at EVOLVE 75.

Get this show somehow, even though it had some lower points, everything was average to great. The three big matches are must watches. EVOLVE continues to deliver and is not making me regret the year long subscription I purchased from FloSlam.