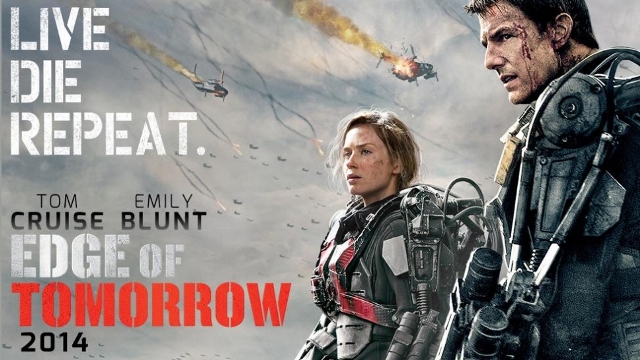 But does all of this make him a bad actor or unable to deliver a believable and relatable performance in an otherwise incredible situation? Hell no! If personal troubles/weirdness were determining factors in whether or not someone could turn out good work then Joaquin Phoenix and Johnny Depp would have quit a long time ago. And, make no mistake, Cruise’s latest; Edge of Tomorrow is some good work.

Cruise plays Major William Cage, a member of the NATO-led United Defense Forces. He’s a glorified PR guy meant to sell people on the idea of warring with an alien race, known as “Mimics” who apparently invaded Earth a couple of years back. Of course, this all gets flipped on him when he’s suddenly moved from salesman to active participant against his will. And that’s when Cruise begins to play against-type for his usual heroic stance in this type of film. He goes from gung ho pitchman to dubious coward in the span of a minute when he realizes his job is now to film what’s supposed to be the biggest battle and ultimate victory for humanity in the war. That all changes when he decides to try blackmail as a way out and he’s suddenly stripped of rank and thrown in as a fresh recruit with one day to train before the battle. To say his life goes straight down the crapper in a matter of minutes is a vast understatement.

After being arrested and tossed in a quickie boot camp scenario, Cage meets Master Sergeant Farell, played masterfully by Bill Paxton who turns in what might be the funniest role of his career. Farell is aware of Cage’s situation and throws him directly under the bus with his new squad by telling everyone Cage is a deserter and a coward. Obviously nobody watches out for Cage when the invasion force lands on the beach in France. He manages to survive for quite a while, even witnessing the death of Sergeant Rita Vrataski, played by Emily Blunt, whom everyone knows as the Angel of Verdun or the Full Metal Bitch, depending on your level of misogyny. Cage is killed (the first time of many) when he uses a mine to take out a special Mimic called an Alpha which winds up passing its ability to “reset” the day onto Cage.

From there, this one become Groundhog Day on steroids. Cage is able to recall everything from each time he dies and eventually discovers that Rita once had the same ability, but lost it due to a blood transfusion after a battle she unexpectedly survived. Once Cage and Rita begin training together, the film takes on a decidedly dark comedy feel as Cage is injured to the point of being useless in a fight over and over again and Rita seems to take a certain amount of pleasure in “hitting the reset button.” Cage also has to go through a lot of “trial and error” in order to get some of his plans to work, usually at the expense of his life in some truly hilarious and unexpected ways.

Cruise and Blunt have amazing on-screen chemistry that goes from being a buddy comedy to heartbreaking tragedy to glorious triumph. Here’s hoping for more of these two together in the near future. The development of both characters is incredible as Cage goes from sniveling coward to real hero; Rita seems to gain some of the humanity she lost while fighting the Mimics over and over again by helping Cage.

The film’s only downside really comes in its antagonist. We’re never told exactly what the Mimics are or why they’re on Earth. Though we do get a nice scene where Cage explains it doesn’t matter why they’ve come, but that they’re intentions are clear and if humanity is to survive it has to find a way to win. That the Alpha Mimics also have the power to reset the day is what makes it harder and why the invasion has been so successful, though that also causes a few plot holes here and there. And there are a few kinda-too-convenient moments thrown in there, too, but most movies of this kind suffer from that same issue.

Director Doug Liman (Mr. and Mrs. Smith, The Bourne Identity) does a great job of getting strong performances from his entire cast and allows the action scenes to evolve as Cage does. At first it’s all very jarring and hard to keep track of and then becomes clearer as Cage gets better at fighting. The special and visual effects are some of the best of this genre, too. While the Mimics are clearly computer generated, as are many ships and large objects, there are lots of practical effects and set pieces, too. As much as this movie owes Groundhog Day for its format, it owes a lot more to James Cameron’s Aliens in structure and flow. Who would have thought combining those two flavors would have worked so well?

Edge of Tomorrow isn’t performing so well at the theaters and that’s a real tragedy given how well conceived and executed it turned out to be. Cruise’s star has fallen a bit in recent years, but it doesn’t make him incapable of turning out good films. This is one of his best to date and another in a long line of sci-fi/action movies that show why he’s one of the best in the business. In a summer chockfull of superheroes and sequels, this is the kind of film we needed.