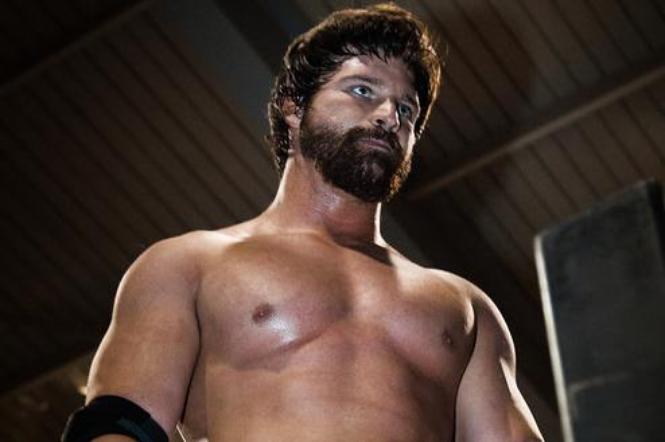 Gunner Miller has all the classic makings of a territory wrestler of years gone by. Good size, collegiate football pedigree and an attractive but rugged look that makes him look like someone that is cool to hang out and be buds with, but you don’t want to piss him off. As he strolled to the ring for his match vs. Joey Lynch on night two of the Scenic City Invitational Tournament 2016, my wife remarked that he probably gets a lot of offers from the ladies. The above description could go for countless wrestlers up and including Lex Luger from the 1970’s and 1980’s. However, in the landscape of modern indy wrestling and pop culture archetypes in general, that type of persona can work against someone. This is a strong, nice looking Caucasian with chiseled muscles.  I have no doubt that Gunner works hard to maintain his physique but there is an attitude that life has probably came “easy” from him just on the surface. Another factor at play is the hometown storyline that Gunner no doubt would play in the SCI tournament. This is a natural wrestling storyline and no doubt a nice portion of the crowd was there primarily to see Gunner wrestle. This again works in contrast to a smart fans mentality where workrate and personality trump all other ancillary factors a promoter may have when planning a tournament of this scale. Knowing that Miller was poised for a deep run in the tournament given these factors, I went into attending these shows paying close attention to his performance.

My personal history of watching Miller has been rocky. I fully can gauge that his potential is no doubt there. He has a nice understanding of the fundamentals in wrestling and can utilize his power moves like the spear and the pounce effectively. I thought pairing Miller with manager Jeff G. Bailey was a brilliant ploy and allowed Miller to gain tutelage under one of the best managers of the last 20 years. This also allowed Jeff to be the mouth piece and almost have a “client Brock Lesnar” type vibe when he presents Miller. Still, I have been waiting for that one killer Gunner Miller in ring performance that wowed me. It is insanely unfair to grade Miller up against the all-time rookie crop of wrestlers that are currently creeping up like LIo Rush and Matt Riddle, but I again le the narrative creep in that some of Gunner’s notoriety and success on the indies was more about who he was and not what he had done. Night one was a rough start. Miller faced off with Mikael Judas in the opening round of the tournament. This match had to be tricky from a booking standpoint as it went on sixth out of the eight first round matches. I found this to be strategic due to it again being a formality than numerous friends and family of Gunner was there to see him. This was evidenced in the fact that even after this match, a few individuals left even with two very good to great matches occurring in Matt Riddle vs. Corey Hollis and Kyle Matthews vs. Chris Hero. The Judas vs. Miller match was the only match on the weekend that I saw that I would classify as poor. The chemistry wasn’t there and there wasn’t a sense of palpable hate with the strikes that were sent back and forth between the two combatants. This allowed me to reflect on the night as a whole at the end of the night and having one negative thought in the sense that I was unsure Gunner “deserved” the spot and positioning he was no doubt going to receive throughout this tournament.

Gunner’s second round match was against Joey Lynch. In a brilliant move of booking, this was the first match of the second round of the SCI Tournament. I thought this allowed the crowd to stay hot from the excitement of the show starting and since Miller was going to win, there wasn’t a fear of people bolting after his match. The Lynch was Miller match was super. Compact, intense and violent action. It never overstayed its welcome and allowed Miller to look dominant in victory while also putting over Lynch as being tough as nails and a worthy competitor. This was the type of match that sings in the tournament setting as while it won’t be on MOTY lists, it really helps shape the narrative of the tournament as a defined entity and brings clarity and awareness to the workers that are involved. Up to this point, this was my favorite Gunner Miller match of all time.

I don’t want to get to hyperbolic on the finals of the 2016 SCI but it could really be one of those moment in time moments for independent wrestling in the United States the same way the 2001 Super 8 is. Chris Hero is already one of the top wrestlers that has ever lived and he is having arguably the best 2016 of any wrestler on the planet. I certainly didn’t begrudge anyone that had Jimmy Rave on their Greatest Wrestler Ever list and he has been a pillar in the success someone could have in the modern indy landscape performing a heel persona. The ink is still fresh in the books of Anthony Henry and Gunner Miller but anything less than prolific indy careers for both would be considered a disappointment at this stage. This match really signified so many facets of pro wrestling that I adore. A changing of the guard, clever finishes, ebb and flows and a dramatic climax that signified the end.

It would have been easy for Miller to feel overshadowed. I just laid out the one sentence resumes for Hero and Rave. Anthony Henry has proven he can step up in a larger scale as the match of the 2015 SCI weekend vs. Rave and his performances this year in North Carolina’s PWX promotion proved. Once again, Gunner had the most to prove to myself. The opening worked well with him being in there and interacting with everyone. An excellent sign of someone’s worth in a multi-man match of this magnitude is that I was never disappointed when Gunner tagged in throughout the early goings of the match. Hero vs. Rave was a featured pairing because it had been a full decade since they have had any singles interaction but the heat and anticipation didn’t dip throughout all of the early stages of the match.

Then came the spot that turned the corner for me on Miller for good. Throughout the night, whether purposely or not, the dives that have occurred have been through the ropes or of a twisting variety. With all three men on the outside, Gunner Miller took flight with a superman dive clearing the top rope in one of the most impressive looking dives I have ever seen. It looked graceful but powerful. He landed with full impact on the competitors in a heap on the floor. As visually stunning and athletically graceful the dive was, the most striking thing to me was that it really showed the passion and sacrifice Gunner was willing to give up. He didn’t have to do that dive and the crowd would have been satisfied with the finish for the most part. I myself would have understood the decision but also would have probably cynically stated that my fourth favorite guy in the match won the tournament. After the dive, all of those thoughts were erased. Miller was an equal suddenly of someone that I have as the best wrestler in the world in my eyes. It was a startling revelation to me and really showed how the build and flow of a match can change a perception of opinion.

Miller built off this momentum with the pinning of Jimmy Rave. I took this as a symbolic passing of the torch moment. Jimmy again has been the South’s staple to southern wrestling in the modern indy scene of the 2000’s and he also defeated Gunner in the 2015 SCI on the way to his victory in the tournament overall. Gunner avenged that loss by showing his growth in a year’s time frame and being able to kick out of the vaunted small package. With Rave out of the match, I was 99% certain that Henry or Miller was winning the tournament. When Henry got eliminated by an absolutely sickening barrage of strikes from Hero, I had little doubt. Wrestling and life can be amazing sometimes in that the most rewarding experiences can be achieved through the most predictable of results. Even with little doubt that Miller was winning, I bit on two or three nearfalls in the climatic, drama inducing portion of the Hero vs. Miller finale. With the crowd chanting “Gunner” “Gunner” more and more drowning out the Hero chants, this again felt like another torch passing moment. In some ways Hero was the antithesis of Miller. Hero coming up didn’t have the best look, was overweight, and had absolutely awful gear. He persevered and made a career of himself in wrestling. Gunner Miller may have the genetics but he is wanting to earn his spot in wrestling as proven by his performance throughout the 2016 SCI finals.

One pounce and pinfall later, Gunner was crowned the 2016 SCI Champion to a wonderful ovation. The crowd at this year’s SCI was a unique mixture of locals and indie wrestling community stalwarts. I can’t fathom anyone not being satisfied with the result after the performance that Gunner gave. I commend Hero’s selflessness in putting Miller over in great fashion. Wrestling fans can be really selfish creatures at times, myself included. For a predetermined art form, I do worry about who is winning and losing a lot of the time. Gunner Miller could have come out and worked at a lesser level and still maintained a nice reaction from the casuals and his acquaintances in the crowd. Instead, he performed on night two of the SCI like he had something to prove and that is supremely commendable to me. Gunner Miller most likely will be successful in pro wrestling, but make no mistake that spot will be earned and not given to him.