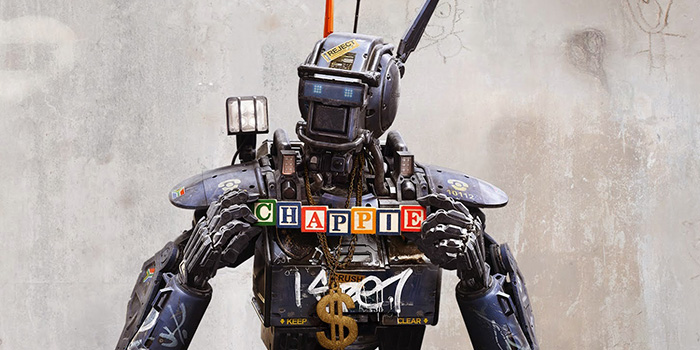 Chappie, the latest sci-fi actioner from writer/director Neill Blomkamp, might have just set a new bar for films in 2015 by firmly planting it on the floor.

Combining elements from such classics as RoboCop and Short Circuit should have made this an interesting exploration into the nature of humanity with some great visuals to go along with it. Sadly, those elements largely came from the RoboCop remake and the gang initiation bit from Short Circuit 2.

From the outset, Chappie gets too wrapped up in its own pseudoscience and forgets to explain its actual narrative. The idea of exploring artificial intelligence is a poignant one in today’s world, but Chappie not only misses its greater point but even shows an incredible tone deafness on the subject of child abuse.

Like District 9 (Blomkamp’s best effort so far), this one takes place in a near-future Johannesburg, South Africa. After crime becomes uncontrollable by the police, a new program of robot cops, called Scouts, is dispatched to combat the problem. They largely succeed in reducing the crime rate, but little is shown about how this has affected the non-criminal populace.

Deon Wilson (Dev Patel), the creator of the Scout program, is the golden boy of his company’s CEO, Michelle Bradley (Sigourney Weaver). This, of course, upsets Vincent Moore (Hugh Jackman), a rival developer whose Moose robot (looking remarkably like the ED-209 from RoboCop) was passed over in favor of the smaller, more efficient Scouts.

Deon though, wants to take the Scouts further and give them true A.I. When a Scout unit is badly damaged in the field, he “operates” on it, thus giving us the title character (played by longtime Blomkamp collaborator Sharlto Copley). Due to some convoluted subplot about a group of the worst excuses for gangsters ever owing money to an even more ridiculous drug lord, Chappie falls into the hands of Ninja and Yolandi (using their actual stage names from their musical group Die Antwoord) and Amerika (Jose Pablo Cantillo). They want to use him in a robbery that will them pay off crime boss Hippo (Brandon Auret). Chappie, due to conflicting messages from Deon and Ninja (who hate each other, in case you didn’t realize that after they expressly said it 100 times), finds himself unsure of what the right thing to do is. Deon tries to teach Chappie non-violence while Ninja manipulates the childlike A.I. into doing awful things as his damaged battery slowly drains away. While this is happening, Vincent is planning to find a way to shut down all the other Scouts and create enough chaos in the streets to allow his Moose program to go forward.

The ugliest parts of this movie come in its second act when Ninja is “teaching” Chappie how to be a gangster by dropping the terrified robot into the middle of a crime-infested slum and telling him to find his way home. Chappie is assaulted by resentful residents who see him as a police bot while Ninja reiterates that it’s for his own good. Even a followup scene where Ninja manipulates Chappie into forgiving him is played for comedic effect when it should have been used to illustrate the horrors of domestic abuse. It might have been easier to sympathize with Chappie if he was in any way likable. Unfortunately, once he starts talking, he becomes as obnoxious as the one-note “gangsters” who stole him. Casting Die Antwoord was a huge mistake here, but it sadly wasn’t the worst one for this film.

Having talented actors like Hugh Jackman, Sigourney Weaver, and Dev Patel should have helped elevate this movie to being at least watchable. Sadly, all of their characters are underwritten to the point of never showing any true motivation for their actions. Even Deon, who’s supposed to be our eyes in this story, comes off as a paper-thin Gepetto who decides working with hardened criminals makes more sense than reporting them to the authorities. Jackman makes an attempt to be menacing but winds up coming off as impotent and boring. Weaver’s two scenes make her appear to be the most incompetent CEO in history while also giving her no room to actually act.

And the movie’s entire third act seemed dedicated to all-but-completely obliterating the themes and ideas about consciousness established in the first two. The ending tries to be both the super happy one (see also convenient) and drop a nonsensical cliffhanger that will likely never be followed up on. And if the randomly changing and often-unclear character motivations don’t cause enough frustration, the final half-hour is focused completely on telling you to care about completely unlikable people.

The only positive thing that can be said for this film is that it features what is easily the most impressive CGI of any modern film. The only way to describe it is photorealism. You will believe that Chappie and all the other Scouts are physically there with the actors. Never has CGI looked so much like practical effects. Now if the same amount of attention to detail had been paid to the story, casting and performances, this movie could have been one of the best of the year. As it is, it’s the one you should definitely skip this spring.