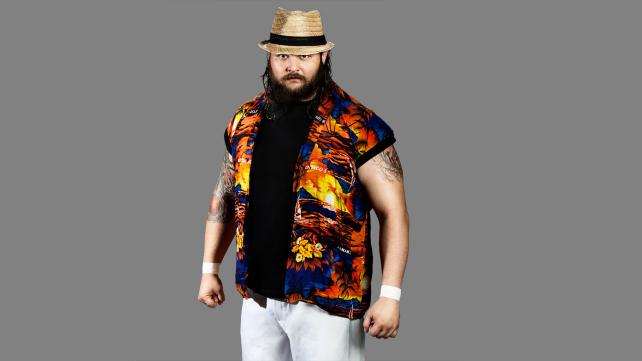 He’s promised us salvation through him, and also denied that John Cena, Chris Jericho, Daniel Bryan and others can be our savior. That he hates everyone and everything the world has ever brought forth, himself included. That he has “created war.” That this is “not the beginning, it’s the end.” That “this is a terrible world.” And, of course, that he’s “the eater of worlds.” Whether it’s been as heavily scripted as everything else has been over the last decade or he has considerable leeway on his promos, I’m really not sure. But I am sure it doesn’t matter. No matter who writes the material, Windham Rotunda has done a remarkable job of throwing himself into a character that could have easily failed if it had been half-assed.

Back to Wyatt’s grandiose claims: they largely revolve around the concept – and I believe he’s even outright said as much – that he’s not human. And that’s the problem.

It’s hard to deny that, in recent weeks and months, the character has plateaued. The pessimistic view is that this was inevitable, that it was an all-too gimmicky character with a ceiling. That once we got past the awesome vignettes that looked like they were for a new FX drama, once we got past the cool entrance, all we have is a cartoon character from a bygone era. An 80s monster shined up with enough high-minded but ultimately empty rhetoric to make it seem edgier than it ever really was. And if the gimmick ultimately falls short of its potential, that’s the most likely cause. (And it’s still appropriate to speak of it in terms of potential, because the Wyatts have been on the main roster for all of 14 months and Rotunda is a mere 27 years old.) But I don’t share that pessimism, and whatever the issues are with the Wyatt gimmick, they’re not terminal.

Not to delve into the murky, uninteresting waters of fantasy booking, but Bray Wyatt doesn’t need to win any certain match. He doesn’t need to be booked stronger; clearly, those in charge are fond of him and he’s reportedly done all the right backstage things to curry favor (not hard to believe for a third-generation wrestler). He just needs to be relatable in some way as a human being. And he’s gotten so close already, you have to like his chances of getting there.

Professional wrestling, at large, is historically very bad at following through at any promise of change. Whether it’s a promotion deciding to shift their focus, a storyline promising to shock the world or a character who promises intangible, high-concept overhaul merely through their actions as a professional wrestler, the follow-up is usually non-existent. (This, more than anything, is why I think the nWo succeeded so enormously; it’s one of the few times in North American pro wrestling history that radical change was essentially promised, and subsequently delivered.)

Bray Wyatt’s promos, of course, are full of such high-mindedness. Of change. Of salvation or the lack thereof. Of war. Of extinguishing hope. And none of these things, of course, are going to happen. So why promise to deliver the undeliverable? The best characters in wrestling history are driven by their ability to relate to us in some way. Any way. Relatability – despite not technically being a word itself – is one of the most valuable currencies in which professional wrestlers can trade. Babyface or heel, good or bad, character traits that we can understand on a human level are necessary. Some may point to the Undertaker as a counterargument, but he is largely the exception to the rule in the last 30 or so years. (Even Mankind, another high-minded gimmick in its original iteration, broke through by letting us see who Mick Foley really was instead.) Stone Cold Steve Austin was a no-nonsense ass-kicker who swilled beer and defied authority. The Rock was a sharp-tongued ex-jock who backed up the humor with action. Bret Hart was the proud defender of a staunch wrestling tradition and family values. CM Punk, who dove deep into the high-concept revolutionist waters and failed (character-wise) on multiple promises of sweeping change, was at his core a very real person who had very relatable human traits. Even when he was trying to enact change, it was on a very real, meta level that in fact ended up being coined the “Reality Era” by some.

Even John Cena makes his simple, personal motivations clear and refuses to be anything but who he is, in a way that’s as perversely admirable as it can often be tiresome to watch. Whether they’re characteristics you like or dislike (much like the Cena character itself, as in some ways he serves as a microcosm for this concept) are irrelevant, as long as you can relate to them as a fellow human being and make some sort of emotional investment with or against it.

Again: this is not fantasy booking, so I’m not going to share half-baked thoughts on what Bray should or shouldn’t do. At this point, though, he’s so entrenched in this gimmick as a heel – even though he’s gotten huge face reactions – that the only way to spin out of it into something more human would probably be a face turn. Because what emotional investment is there, as a viewer, to make in such a character beyond what you’ve already decided you think about the gimmick and the performer to date?

The current rumor has his next program being with Dolph Ziggler for the Intercontinental title. Though that belt hasn’t portended the great things for its holders that it once did, that’s probably a good next step for Bray as the character continues to be refocused – and arguably, rebuilt to some extent – after perceived damage done to him during his feud with Cena.

Wyatt, and to a lesser extent, Luke Harper and Erik Rowan, has gotten over through the combination of a fairly original gimmick (credit where it’s due: the modern, “Southern Gothic” motif is a fairly unique twist on the all-too common rasslin’ rednecks), mesmerizing promos, a great look and memorable matches.

Much like The Shield, albeit in a very different way, they’ve gotten too far and too over already for me to believe they’re a one-note gimmick with a soon-to-expire shelf life. Every bit of the potential Bray was thought to have, I think is still there. He just needs to give us something that we can relate in any humanistic way. Much like the aforementioned Mick Foley, even if an avant garde character was what garnered him initial acclaim, letting his inner monster show some humanity is what will take him to the stratosphere he absolutely has the potential to reach.

So, yes, Bray talks a big game. But letting Windham get a word or two in will speak volumes.