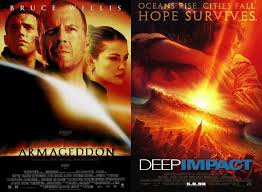 On the second episode of Blockbuster Rewind, co-hosts Andy Atherton, Scott Shifflett & Eric Eells are joined by guest Jennifer Smith to discuss a couple of similar blockbusters that were both released in the summer of 1998: Deep Impact & Armageddon. They go through each of the films and talk about their favorite scenes, best and worst characters, the science facts and fictions, rate the main character deaths, reveal what they would do if faced with the same situations and question some of the ridiculousness that permeates the movies. As a bonus, they chat about a couple of other films in the genre: Melancholia & Seeking A Friend For The End Of The World.