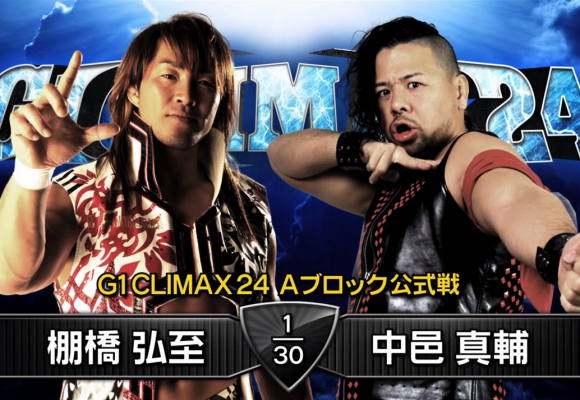 The Osaka G-1 show from last year was a consensus show of the year. Coming off the momentum of the Korakuen show, most people expected the same with night eight of this year’s G-1. Will they be able to deliver?

Ishii in the opener role is genius stuff. Even though he is my personal favorite guy in the promotion and can certainly hang and “deserves” a spot higher up, it is crucial having him in this role to get the crowd and viewer revved up. This was a great opener that had bombs thrown a plenty and both men using unique cut offs to keep the action logical. Ishii sells his neck magnificiantly and especially uses his knees as a cut off focal point. Ishii winning with the brainbuster was a great finish. This is my favorite opener of the tournament so far and was a really damn good match. ***3/4

Short but sweet. These two played up all the stuff of Yano’s previous matches and it worked tremendously. Yano takes apart the turnbuckle and sends Tenzan in. Tenzan is constantly looking for the Anaconda Vice but Yano bumps the referee giving Tenzan a visual tap. Yano goes for the low blow but Tenzan has done his homework and hits a lowblow of his own and then gets the tap. This looks like the end of the road for a deep run for Yano in the G-1 which is disappointing but his matches are still a ton of fun. **1/2

I wasn’t exactly looking forward to this one. Color me surprised. They worked a back and forth match that can be generic feeling and lifeless but they added a ton of neat counters to keep the action fresh and logical. I especially appreciated the reversal of the Paydirt into the armbar and eventually the submission victory for Nagata. Benjamin is now done after going 4-0 and Nagata is mounting a little comeback. Maybe the biggest surprise match of the tournament so far that was actually good. ***1/4

My least favorite match of the evening so far. This match unlike the one previous, featured back and forth action but didn’t have the clever counters to keep me engaged. The highlights were the punch Gallows gave on a Kojima tope to the floor and the counter of the lariat with the Gallows Pole. Kojima fires back with the lariat and puts this one away. **1/4

Osaka is not a fan of Naito. Naito plays this up well and the match is for the better of it. Also, I have really appreciated the lack of work opponents of Naito have done to his leg. Leg work can be engaging and a crutch to use to fill out the body of a wrestling match but Naito’s comeback and offense lives and dies off explosiveness of his legs resulting in no-selling of a main component of the match. The finishing run of this was great with Goto trying to weather the storm and a big sense of indecisiveness as to who was going to win. Naito going down here pretty much dispels any thought of him repeating as G-1 champion and Goto does a great finishing run that didn’t feature too many kick outs. ***1/2

I am tired of writing superlatives for AJ’s matches but this was incredible and totally unique again. Archer dominates Styles for the majority of the match and AJ is having to work from underneath. Archer does a good variety of power moves and toes the line between methodical and calculated. AJ sees an opening attacking the leg and goes right after that. This leads to the finish that pays off those two narratives perfectly and the finish of the leg submission by AJ is incredibly satisfying. This could be a great main event contested in TNA that would end a PPV. Instead, we have to settle for it being the #6 match on a G-1 card. AJ is staking a big claim as wrestler of the year. ****

Two grizzled veterans must have been watching backstage as this match features a ton of leg selling by Suzuki. He just came off a transcendent performance vs. Styles and turns in another great one in this match vs. Makabe. Makabe works over the leg well and mixes things up so that these two matches back to back don’t feel repetitive. Suzuki overcoming the odds and getting the dropkick was a great tipping point in this match. He then is able to secure his choke and win a critical match for both men. I have to give these two guys kudos for being around forever but still producing a match that felt this fresh. ***3/4

Poor, poor Honma. I won’t be able to type out many words for this match but it was a brutal war that went the perfect length and had the crowd salivating for an all-time upset by Honma. The brutality, pacing and structure displayed were great and this felt like an epic fight that I wouldn’t have changed anything about. The second best match of the entire tournament so far. ****1/4

Finally a Yujiro performance that didn’t totally annoy me. He meshed well with Okada jumping him in the entranceway and staying more focused and menacing than in previous matches. Okada worked this like a guy on top that was not going to let this young punk take the victory away. I question the placement of this match but enjoyed it overall and was happy to see the Rainmaker extinguish Yujiro. ***

This will be the fourth singles match between these two in 2014. I have found them ranging from great (Invasion Attack) to middling (Wrestle Kingdom). I would place this effort slap dab in the middle. The end run was incredibly dramatic and intricate but it featured one too many kick outs for me after the second Boma Ye. I also failed to see much consistency from Nakamura from having his leg worked over to being on offense. I would have made the finish happen after the spin out of the dragon screw and when Nakamura hits the Boma Ye. The banana peel victory rollup that Tanahashi utilizes to win felt cheap and didn’t add to the narrative at all. I know it sounds like I am negative but this match did do a lot good and had the crowd molten. I just thought the flaws I presented prevented the match as a whole from being great. ***1/2

Night eight thoughts: Well, another great show. Two **** and no matches I would outright call bad. I think this might have actually eclipsed night seven but I am not positive about that assertion. This has been a great tournament so far and we are nearing the home stretch.