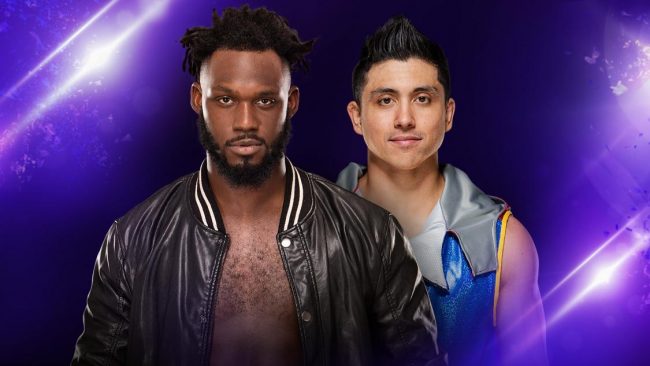 August 8, 2017
From the Air Canada Centre in Toronto, Ontario, Canada
Your hosts are Vic Joseph and Corey Graves

We get a video package on the events over the past few weeks that have led to tonight’s Rich Swann vs. TJP match.

Tonight, Corey Graves will host a sit down interview with Akira Tozawa that will take place inside of the ring.

Nese stops Cedric then has us all look at his bicep. They work a great, fast-paced reversal sequence that ends with Cedric hitting a satellite headscissors. He takes Nese outside then hits a moonsault from the apron before rolling Neck back into the ring. Nese backdrops Cedric on the ropes as Cedric gets crotched then Nese boots Cedric off and catches him on his shoulders and hits a gutbuster for two. Nese puts Cedric in the tree-of-woe and lands some kicks then uses his ab crunch kicks before taunting the crowd with his physique. Cedric sneaks in a small package for two but Nese runs him over then stomps away before locking on a bodyscissors. Cedric elbows his way out then hits an enziguiri as both men are down. Cedric is up first and hits a pair of clotheslines as he starts to run wild. He gets two with the springboard clothesline then hits another chop but Nese is able to grab Cedric’s hand on a slide then hits a pumphandle driver that gets two. Nese slaps Cedric across the face but gets knocked down then runs into a kick. Nese uses the matrix to avoid a kick and that triggers a nifty reversal sequence ending with Nese grabbing the tights on a rollup for the win (7:21) ***1/4. After the match, Nese tells us we witnessed the difference from an excellent athlete compared to a premiere athlete and with him around, Cedric will only be the second best.

Thoughts: It looks like these two will be in a feud now as it started with some trash-talk a few weeks ago in their tag match. Nese’s new character talking about his physique and the change in his ring entrance have made him unique and for the first time gives him a platform to stand out. I thought he carried himself well. Alexander is one of the better performers in the division and with the chemistry they showed in the ring here I am looking forward to see what they can do in the coming weeks.

Dasha Fuentes is backstage with The Brian Kendrick. She shows him what happened last week when Jack Gallagher kicked the crap out of him, resulting in a disqualification when Gallagher refused to listen to the referee. Kendrick says that footage proves that Gallagher is a fraud who could not fight and had to get himself disqualified. He then says since he won he’ll move on to the next chapter of his life but Gallagher blindsides him and hammers away. He takes Kendrick’s jacket and looks possessed as he grunts while Kendrick runs away. I get what they are trying to do with Gallagher here but the problem is the material Kendrick has to piss off Gallagher is so incredibly lame its tough to care about Gallagher snapping. The sooner this feud ends, the better for all involved.

Before his match, Noam Dar tells his opponent he recognizes him. He says its Mark Thomas and how he used to do chores for him before laughing at the fact Thomas has never made a name for himself and he is a WWE Superstar at just 24 years old.

The crowd lightly chants for Thomas, who fires away. Dar bails then returns as Thomas applies a front facelock. Dar kicks out Thomas’s leg then stomps away before yelling “super nova!” We get more stomps from Dar then an uppercut before hitting a running enziguiri for the win (1:48).

Thoughts: Dar showed nothing here and the crowd did not seem to care about his antics. Looks like they are waiting to put him into another feud and given whose without one at the moment, my money is on Mustafa Ali.

Corey Graves welcomes Akira Tozawa in the ring. The crowd does the Tozawa chant before Graves asks him about his momentum heading into SummerSlam. However, Neville comes out to interrupt. He reminds us about being the King of the Cruiserweights and believes he is the one that should be getting this interview. He tells Graves that he is the hype and Tozawa is no competition. Tozawa then tosses his chair outside and removes his coat behind Neville’s back before addressing Neville. Tozawa tries to ask Neville a question then Neville makes fun of his English before allowing him to speak. Tozawa asks Neville how will he feel after losing his title at SummerSlam. Neville tries a cheap shot but Tozawa drops him and goes up top for the senton but Neville rolls out of the ring. Neville tries to run back in but Tozawa kicks him off of the apron as the segment ends. I like how Tozawa does not stand for Neville’s threats and insults as they’ve done a really good job in building up the match at SummerSlam. Tozawa’s chant is starting to catch on more too with the crowds. I cannot wait to see what these two can do at the PPV.

Swann works a headlock to start. They work a fast-paced Irish whip sequence that ends with both men getting tied up in the ropes as they are playing up the fact both guys know each other well. Swann takes TJP outside with a clothesline then takes him out with a springboard senton that applause from the crowd. Back inside, Swann is able to ground TJP with a hammerlock. TJP comes back and pancakes Swann before hitting a pair of suplexes that gets him a two count. The crowd starts a mild chant for Swann but TJP remains in control. TJP gets two with a slingshot senton then works a bow-and-arrow lock. Swann escapes but soon after that runs into a dropkick then TJP takes him back to the mat. Swann gets out and misses a dive from the top then TJP heads up and suffers the same fate as both men are down. Swann blocks a kick then runs wild. He takes TJP off of the top with a hurricarana that gets him a two count. TJP counters a double underhook then locks on the knee bar. Swann escapes and hits a roundhouse kick then hits a standing moonsault for two. Swann sets up for the Phoenix Splash but misses. TJP tries for the chicken wing gut buster but Swann rolls through that and gets two. TJP takes Swann on top of his shoulders and uses an electric chair drop on the turnbuckle then TJP puts Swann away with the Detonation Kick (10:29) ***1/2. After the match, TJP celebrates and even dabs right in front of Swann before getting in his face and taunting him. TJP still gets in Swann’s face as he heads down the aisle and talks trash while walking up with him then finally leaves by using Swann’s own dance move. We even head backstage with TJP in Swann’s face and asking if he is a sore loser. Swann says its not about losing but rather TJP acting the way he has been despite claiming to be a friend and that he is finally learning what TJP is all about before walking away.

Thoughts: I liked their first match a bit more but this was still an excellent main event as TJP got his win back and now holds a 2-1 advantage over Swann dating back to the CWC.  TJP’s post-match celebration was something else though as he could not stop taunting Swann. I also liked the backstage segment afterwards as they story can go either one of two ways: TJP realizes he’s a jerk and tries to repair his friendship or he just beats the crap out of Swann then calls him out for being a sore loser. Since TJP is much better as a heel, I’m hoping for the latter and he can add the over-the-top celebrating to his repertoire.

Final Thoughts: They continue to make the Cruiserweight Championship feud intriguing. Plus, Swann/TJP and Nese/Alexander are two other feuds that should be interesting in the coming weeks. Sure, the Kendrick/Gallagher stuff is not getting over and Noam Dar getting more TV time is always a negative but their were more positives than negatives and more focus on the matches too, making it an easy show to watch.