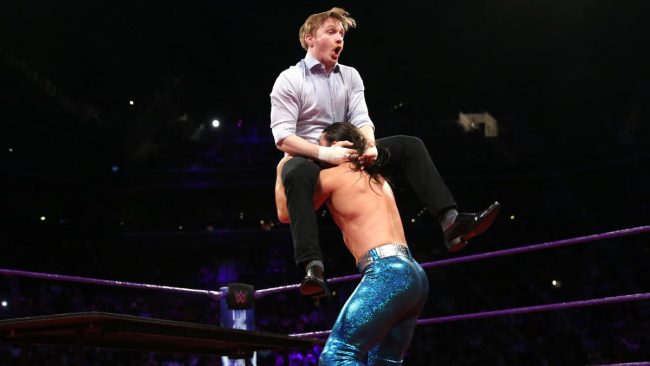 August 22, 2017
From the Barclays Center in Brooklyn, NY
Your hosts are Vic Joseph and Corey Graves

We get a video highlight package of Neville beating Akira Tozawa at SummerSlam to regain the Cruiserweight Title as Tozawa will get a rematch tonight.

Apparently, this match was requested by Nese himself. Gulak also has a new Titantron video which was badly needed. Nese came down the ramp showing off his physique and ragging on the crowd for being out of shape. Cedric lets Nese pose for the crowd then the two fight over an arm wringer. Cedric hits a satellite headscissors after an Irish whip sequence then stuns Nese with a dropkick. Gulak tags but Cedric knocks him down and tags out. Metalik wows the crowd with his ropewalk offense but Gulak starts paintbrushing him then makes the tag. Metalik lands on the apron then leaps over a sliding Nese and takes him out with a quebrada all in one motion. Back inside, Nese runs over Metalik then stomps away. Cedric and Nese get into a verbal spat as Metalik uses a reverse rollup for two. Nese goes back on offense then knocks Cedric off of the apron. Metalik dumps Nese from the top then stands on the ring post and hits a crossbody for two as both men are down. Cedric tags in and runs wild on Gulak. He gets a nearfall with a springboard clothesline but eats boot on a charge after that. Metalik makes a blind tag and sends Gulak down and hits a ropewalk splash as Nese makes the save. Cedric & Metalik come back with stereo tope con hilos then Cedric tosses Gulak inside and eventually hits the Lumbar Check for the win (7:51) ***.

Thoughts: Good match. They are building up Cedric more now and its nice to see Metalik get the chance on the show as his offense was getting over a bit here. Anyway, a fun match as I expect the Nese/Cedric stuff to heat up and we will probably get a Gulak/Metalik match in the future as well.

Titus O’Neill is backstage with Tozawa. He tells Tozawa to put the past behind him then lists off a bunch of strategies but Tozawa assures him he is ready and will take back the title. Tozawa was quite confident here but Titus was not at all.

Back in the ring, there is a table set up with a pipe, crowbar, umbrealla, candlestick, and to set up for tonight’s duel between Jack Gallagher and Brian Kendrick. Gallagher tells us how we all have someone in our lives that can push our buttons and for him its Kendrick. Gallagher decides to explain himself as he has not been acting like a “gentleman” lately but thinks sometimes he has been too much of a nice guy as in life, some people just need to get knocked out. We then hear Kendrick on the screen as he tells Gallagher he is pathetic and trying to talk tough and surround himself with toys. Kendrick also says Gallagher is proving him right then proceeds to introduce a clown that comes out to the ring whose name is apparently “Sprinkles.” The clown starts messing with Gallagher as the crowd starts a “stupid idiot” chant. Sprinkles takes off a glove and slaps Gallagher but gets knocked down. Gallagher then clears the table and tries to powerbomb Sprinkles but Kendrick runs in to attack Gallagher with the umbrella. Kendrick then powerbombs Gallagher through the table then grabs the mic and tells Gallagher they both got to beat up a clown tonight before proposing they have a No DQ match next week.

A long segment that is part of a feud that has not compelled in the slightest. Even worse, whatever reaction Gallagher was getting before has gone away as a result. The No DQ match might be good but everything leading up to it has been dreadful.

We get a replay of last week where TJP came out on crutches and distracted Swann in his match against Ariya Daivari. Now, we see Swann approach TJP, who is wearing a brace and playing video games in the locker room. TJP shuts of the game with his crutch then tells Swann he injured his knee the week before after their match. He even claims to have no idea his music would be played and that Swann would get distracted enough to lose. TJP says Swann’s losing streak has made him salty and this competition has gone too far so Swann should focus on Daivari instead of him as he thinks Swann can win, only if focused. Swann says he likes that as he can beat Daivari then focus on their rubber match as he tells TJP to focus on his recovery. I liked this segment as TJP was completely insincere and Swann knew it and did not fall for the excuses. I’ve liked how they built up this feud so far and it could end up getting Swann over at the end as he’s someone with loads of charisma that the WWE has been unable to showcase on TV.

Neville backs Tozawa against the ropes and breaks cleanly then goes after the arm but Tozawa takes Neville against the ropes then chops Neville as he shows some confidence. Neville grabs a side headlock and tells the crowd to shut up as they were mimicking Tozawa’s chant. Neville stays in control then puts Tozawa’s foot down after catching a kick but Tozawa catches his kick then hits some chops in the corner. Tozawa lands a kick to the chest but Neville walks away before Tozawa can try a tope. Neville yanks Tozawa’s arm from the apron and targets that for a bit as Titus looks concerned. Tozawa suprirses Neville with a sunset flip but gets sent outside with a dropkick. Neville heads up top then flies out with a moonsault as the ref goes out to check on Tozawa and his arm. Neville sends Tozawa’s arm into the LED board then Titus tells his client to get up as Neville is in the ring. Tozawa just beats the ten count then Neville drags him outside where he rams him into the barricade. Back inside, Tozawa takes Neville off of the top rope by dropkicking the ropes then rallies the crowd behind him before booting Neville off of the apron and flying out with a tope. Tozawa hits a Yakuza kick on the apron and jumps off with a senton. Back inside, Tozawa gets a two count as the crowd is behind him. Saito suplex gets two then he heads up top but Neville cuts him off. Neville climbs up and they fight until Neville hits a superplex but Tozawa is able to cradle Neville on the landing and gets two. Tozawa then hits Neville with a lariat as both men are out. Neville hits Tozawa with a fireman’s carry slam then hits a running kick to the face as that gets two. Titus rallies the crowd behind Tozawa as he is getting kicked in the face by Neville. Tozawa drops Neville with an elbow smash after getting taunted but runs into an elbow smash. Tozawa gets two with a rollup then lands some kicks. Tozawa slides underneath Neville’s legs but Neville drops down and puts on the Rings of Saturn. Tozawa rolls up Neville for two and they trade rollups until he drills Neville with an enziguiri. The crowd is behind Tozawa as he heads up top for the senton but Neville rolled away then puts on the Rings of Saturn for the win (16:10) ***3/4. After the match, Neville mocks the crowd for thinking that Tozawa would win and mocks his six-day title reign before saying the history books will call him the King of the Cruiserweights. However, Enzo Amore’s music plays and he introduces himself to the crowd then says 205 Live just became the “realest show in the room” as Neville looks disgusted before laughing and leaving. Enzo then calls Neville SAWFT as the show ends with Enzo taking off his shirt and flexing.

Thoughts: This match was excellent. Started off slow but really picked up down the stretch as the crowd was really into Tozawa and would have gone nuts for a title change. However, the big news was Enzo coming out and declaring himself part of the Cruiserweight Division.

Final Thoughts: The in-ring action was really good tonight and the title match was one of the best in the history of the show. However, having Enzo debut overshadowed everything else. In a division that is supposed to be based around an exciting in-ring product, you have a guy who is probably one of the clumsiest performers on the entire roster. His work on the mic might get him over but he stumbles in the ring and embarrasses himself then I do not think anyone will care on 205 Live, a show that is struggling to engage the crowds to begin with. Next week we have a No DQ match and likely a match between Swann and Daivari as we will probably see more of Enzo and Neville too.