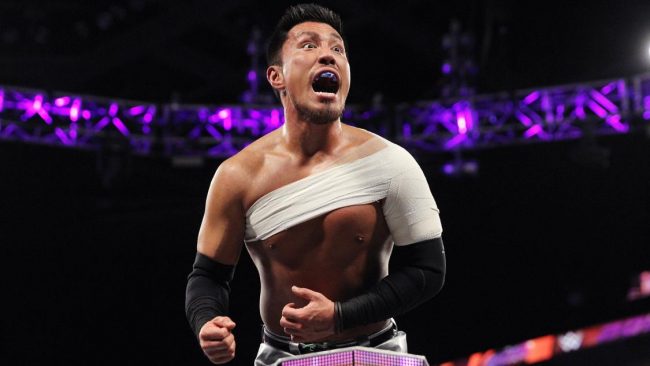 August 1, 2017
From the Quicken Loans Arena in Cleveland, OH
Your hosts are Vic Joseph and Corey Graves

This show was delayed by about five minutes to show us Baron Corbin running in from behind to attack Shinsuke Nakamura, who had just defeated John Cena for the right to face Jinder Mahal for the World Title at SummerSlam. Cena then fought back against Corbin and put him through a table with an AA then went into the ring and raised Nakamura’s hand before leaving.

The Brian Kendrick comes out to the ring. He tells us that Jack Gallagher is nothing but a clown and tonight he rids 205 Live of Gallagher and sends him back to where he belongs, the circus. Terrible promo to be honest. Even Kendrick seemed embarrassed to deliver his final line.

Gallagher immediately beats on Kendrick then headbutts him in the corner. He continues his assault then hits a headbutt before stomping on Kendrick as he tries to escape outside. Gallagher refuses to stomp as Kendrick is through the ropes then the ref rings the bell for the DQ (1:21) *. Gallagher starts tossing Kendrick around outside of the ring then grates his face against the LED apron. Kendrick manages to escape through the crowd as Gallagher went to grab his umbrella.

Thoughts: More of an ass-kicking than a match but it was nice to see Gallagher shut Kendrick up after weeks of insults. Since Gallagher got disqualified I assume they will soon have a blowoff match of a feud that really has not been any good at all.

Rich Swann and Mustafa Ali are backstage playing video games. They are playing WWE 2K17 a Kevin Owens and AJ Styles until TJP interrupts. Ali leaves as Swann asks TJP over obsessing to be better than him but TJP insists this is just friendly competition. Swann questions that and says it started when he beat him a few weeks ago and suggests they handle this next week in the ring. TJP is down for that then asks for some friendly competition as they play the video game. The stuff between Swann and TJP was fine but having the guys backstage playing video games like this really does make them look like geeks. This division is struggling and the guys do not need to be positioned in a way that makes them seem inferior to the rest of the roster.

Tony Nese comes out for his match. His entrance now includes a spotlight on him while on the ramp. Nese gives us several different poses on the ramp, including his eight-pack abs as he tells us that is why he’s the best. He then gets in the ring to tell us he’s what a premiere athlete looks like and while he are in awe of his physique and ability. Nese then tells us you have to look the part to be a successful and that’s why his team won the main event last week. He wants us all to look at him because he has the body of the winner while his opponent is covered from head-to-toe for a reason, because he is disgusting. Metalik comes out and we get a prerecorded promo with subtitles saying your abilities, skills, and most importantly your heart is what matters. The stuff by Nese wasn’t bad and he actually got some heat as they are going all in with this new gimmick based off of his physique. The promo by Metalik was incredibly lame, especially in 2017, but seemed less so than it would have if he had to do it in English.

Nese flexes on his knee as Corey channels Jesse Ventura to make jokes about etalik being ugly. Metalik shows off his speed with a few arm drags then taunts Nese by flexing. Nese rolls outside after getting hit with a dropkick but cuts off a dive. Nese charges to take Metalik off of the apron but in one motion Metalik jumps over him and flies out with a quebrada in one hell of a spot. Back inside, Nese catches Metalik with a gutbuster for a two count then stomps away. Nese stays in control then locks on a body scissors. He tosses Metalik in the corner and puts him on top but spends too long taunting the crowd and gets knocked off as Metalik takes him down with a crossbody. He hits a dropkick after walking the ropes then heads back up top for an elbow drop as that gets two. They work a reversal sequence where Nese Kicks Metalik off of the middle rope then hits a running knee smash in the corner for the win (6:28) **3/4.

Thoughts: Metalik gave us a sample size of his abilites but this was all about getting Nese over as he is getting a push and perhaps could be a challenger to Tozawa, if he wins the Cruiserweight Championship. Solid match and hopefully Metalik gets to stick around more instead of appearing once every three months.

Tozawa is shown warming up backstage.

Dasha Fuentes is backstage with Neville. She asks him about tonight’s number one contender match. He says Tozawa and Titus Worldwide have been a thorn in his side for far too long and Daivari made a fatal error in disrespecting him as its irrelevant who wins because they are awaiting defeat and humiliation at SummerSlam. Neville has really embraced this gimmick and as a result his promos are effective.

Daivari comes out and cuts a promo about Iranian history and gets the “What” treatment from the crowd.

We learned that Tozawa asked Titus O’Neill to stay away via social media. The crowd starts mimicking Tozawa’s chant as the two men fight over a lockup. Tozawa ducks a cheap shot then sends Daivari down in the corner. Tozawa hits a few chops then starts running wild. He sets up for the top rope senton but Daivari rolls outside. Tozawa sets up for a tope but Daivari cuts him off then starts targeting the shoulder. Tozawa fights back with a jab then hits a hurricarana before they start brawling outside. Daivari sends Tozawa shoulder-first into the post. He beats on Tozawa then tries to win by countout but Tozawa is able to just beat the ten count. Daivari lands some crossfaces then goes back to targeting the shoulder. We see Neville looking on backstage as Daivari stays in control. Daivari locks on a Cobra Clutch in the middle of the ring before hitting an armbreaker that gets two. He heads up top but misses a splash as both men are down. Tozawa hits a kick then a Saito suplex. He gets a nearfall with a Shining Wizard then heads up top slowly as he is in pain and as a result gets cut off. Daivari heads up for the frog splash but that only gets two. Tozawa ducks a lariat then sends Daivari to the floor. He flies out with a tope then rolls Daivari inside and hits the top rope senton for the win (11:18) **1/2.

Thoughts: The crowd was into some stuff on this show but this match fell flat. Daivari was unable to get any heat on Tozawa during the match and wrestled the same basic match he always does and the match dragged in the middle as a result. Tozawa really tried to get the crowd into him at the end and they did like him but this was not clicking well. Anyway, Tozawa wins and heads into SummerSlam for another shot at the Cruiserweight Championship. And, I expect Titus’s absence to be followed up upon next Monday on RAW.

Final Thoughts: The main event fell below expectations and nothing else really stood out, making this a disappointing show. Looks like they are giving Nese a push and that’s a much better choice as a top Cruiserweight heel than trying to heat up Daivari or god forbid Noam Dar. The next few weeks, I assume, will be spent hyping up Tozawa vs. Neville for the title at SummerSlam and we do have another Swann vs. TJP match next week as their last encounter was excellent.