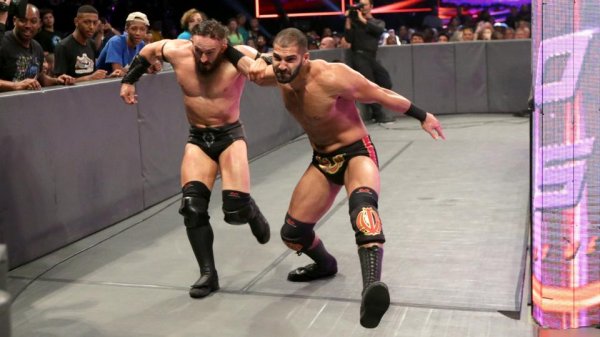 From the Richmond Coliseum in Richmond, VA

Dasha Fuentes is backstage with Neville. We are shown what happened last night on RAW when Neville confronted Akira Tozawa and got laid out after delivering some trash-talk but Ariya Daivari came in and beat on both men then motioned that he would become champion. Neville tells Daivari that he made a critical error last night by thinking he could takeover the Cruiserweight Division and promises to teach him a lesson tonight.

Akira Tozawa heads out to the ring by himself wearing a suit as he will be on commentary for Daivari vs. Neville. He assures the announcers that his shoulder is fine. Daivari comes out first and tells us he is the only person that deserves a Cruiserweight Championship match and will dedicate his victory to Abdollah Movahed, 1968 Iranian Olympic Gold Medalist.

Daivari stalls to start. He tries to play mind games then is able to boot Neville off of the apron. Daivari sends Neville into the barricade a few times. He rolls Neville inside and gets two with a frog splash but Neville ducks a hammerlock lariat and drills Daivari with a super kick. Neville then perches himself up top and hits a missile dropkick. Daivari rolls outside then Neville drags him in front of Tozawa and slams his head off of the announcers table before staring at Tozawa. Neville gets in Tozawa’s face and Tozawa heads towards him but Daivari shoves Neville into Tozawa then rolls inside to get the win via countout (4:37) *1/2. After the match, Tozawa is shown grabbing his shoulder as Daivari is smiling on the ramp. Tozawa heads inside but is stopped by a few officials as the crowd chants “let them fight.”

Thoughts: Not much of a match but it did heat up the Neville/Tozawa feud. They are also making Daivari out as an opportunist with his attack last week and the way he won tonight. He just might be able to weasel his way into the title picture, especially with a win over the champion. This current Daivari character is certainly more interesting than hearing him talk about how expensive his shirts and luggage are at least but he still does not stand out much as a performer.

We are shown highlights from last week’s Mustafa Ali vs. Drew Gulak 2-out-of-3 falls match. I highly recommend seeking this out. Corey even told us he watched this match a few times on the WWE Network this weekend because he liked it so much.

The Brian Kendrick heads out to the ring. He talks about trying to help and teach us but ended up getting attacked and snarky tweets on social media telling us fighters like himself and clowns like Jack Gallagher. Kendrick says he realized we are just simple people and need pictures to learn. Gallagher is shown on the screen and we see all sorts of clownish stuff photoshopped on him as Kendrick says it looks like a clown to him. Gallagher comes out to tell Kendrick that he is insecure and instead of taking the highroad will “knock his bloody” head off as he runs to the ring but Kendrick bails. Kendrick then leaves through the crowd as he yells at everyone while Gallagher’s music plays. The photoshop comedy segments in the WWE are usually terrible and this was not an exception. The material was incredibly lame. A Kendrick vs. Gallagher match should be good but this feud is not working and the premise is flimsy.

Dasha is backstage with Swann & Alexander. Swann said he chose Alexander as his partner due to what he did to Dar in the “I Quit” match. Alexander said he accepted because he came to 205 Live for competition and not to deal with crazy girlfriends. TJP & Nese interrupt and there is some trash-talking as both teams accuse each other of not being able to deal with friendly competition. Not the best acting here but the match should be good anyway.

Nese gets on one knee and tells Swann to stop to everyone can appreciate his bicep. He runs over Swann after that but Swann comes back with a dropkick after an Irish whip sequence. Alexander tags and takes control but Nese retreats to the corner. Alexander yanks Nese out and tags Swann as they hit a few double-team moves. TJP tags in after Nese escapes and engages in some matwork with Alexander. TJP pisses off the crowd with some dabbing then Alexander takes TJP down. Swann & Alexander hit stereo dives with Alexander landing badly on his tailbone then they head back inside. Alexander misses an attack and ends up outside where he gets distracted by Nese as TJP attacks from behind. Nese tags in and beats on Alexander in the corner then does his ab crunch kicks from the mat while Alexander is in the tree-of-woe.  Alexander gets a nearfall with an inside cradle but Nese runs him over after that them hammers away. The heels cut off the ring as the crowd rallies behind Alexander. TJP hits a springboard forearm for two then goes back to the arm. Alexander escapes and elbows TJP down then makes the tag as Swann runs wild on Nese. He gets two with a jumping frog splash but Nese blocks a suplex as then avoids an attack with a matrix as they work a great sequence ending with Swann hitting a super kick. Alexander and TJP are in now with Alexander in control. He hits TJP with a Spanish Fly for a nearfall as Nese makes the save. Nese cuts off Swann with a slide then slams him off of the announcers table. Alexander boots Nese off of the apron then hits Alexander with a chicken wing gutbuster for a one count. Alexander comes back with a handspring enziguiri that gets two. The ref checks on TJP as Alexander sets up for a springboard clothesline but Nese shoves him off and Cedric bounces off of the ropes as TJP covers for the win (12:20) ***1/4. After the match, TJP & Nese celebrate while Swann & Alexander are pissed on the outside.

Thoughts: This really started heating up in the last few minutes. The heels getting the win makes sense as they can advance the friendly competition storyline between TJP and Swann with TJP showing that he still wants to take shortcuts, even against his friend. You can also start a singles feud between Nese and Alexander if you want but I would like a rematch in the coming weeks. It could really steal the show. Nese, while not good on interviews, is starting to show a lot more personality in the ring. The crowd was into Alexander here as well.

Final Thoughts: The main event was good and the Cruiserweight Title feud stuff at the beginning was fine. It had less in-ring action than usual but the show moved along at a brisk pace and was easy to watch. Expect the Title feud to dominate until SummerSlam as it will be interesting to see over the coming weeks if Daivari gets a shot at the Cruiserweight Championship.