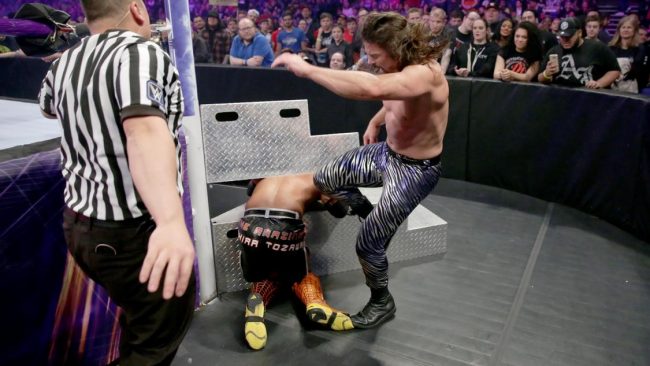 May 9, 2017
From the O2 Arena in London, England
Your hosts are Corey Graves and Tom Phillips

The show starts off with a video package on the TJP/Neville relationship as Neville tells TJP he can get a title shot if he can prove himself by winning matches. We also see TJP attack Jack Gallagher after cheating to defeat him on RAW until Austin Aries made the save.

Gallagher comes out to start the show. He talks about Aries saving him last night and brings him out to the ring. They say hi to each other as Gallagher says the reason Aries is out here is because he wants to toast him. Aries said a simple thank you would have been fine then promise to make sure Aries gets to wrestle for the Cruiserweight Title then gives him a beer and sings “for he’s a jolly good fellow” until Neville interrupts. Neville says this is pathetic and calls the crowd “cretins” and calls them out for losing their dignity. Aries tells Neville to not question anyone about their dignity as he intentionally got himself disqualified to retain his title. He also sucks up to the crowd but Neville holds up the belt for a toast of his own and says it will be his last appearance on 205 Live as TJP attacks Aries from behind. Neville joins in and ends up ramming Gallagher into the barricade as TJP joins in until Aries breaks it up. Aries tosses both men into the barricade. TJP heads back inside but Gallagher meets him and spits beer in his face before hitting a headbutt. Neville runs in but Aries hits the discus five arm as Neville & TJP bail then Gallagher grabs the two pints and the two chug them down. Solid segment to kick off the show as we seem to be building up to a big tag team match between these men.

Rich Swann is smiling as he walks backstage. He sees Noam Dar & Alicia Fox and accuses Dar of thinking with something other than his mind to figure out how he could be with Fox. Dar accuses him of trying to break them up while Fox says people have the right to be with each other and she can also kick people to the curb like Cedric Alexander. Swann says they deserve each other and walks away but Dar stops him and says he has not forgotten about what he did. This storyline is continuing and it has been dreadful. Swann is now just your typical smiling WWE babyface with bad jokes, which is a shame given how charismatic he is and Dar doesn’t bring much to the table. The Alicia Fox romance stuff has been dragging down 205 Live for a while now and hopefully they do not have Cedric return to this mess but since they keep bringing up his name, they likely will.

This is a rematch from two weeks ago when Gulak interfered in the match. Nese flexes and taunts Ali then takes him down. Ali comes back with a pair of arm drags then works an octopus hold. Nese comes back with a kick but Ali floats over in the corner and hits a dropkick. Nese bails as Ali flies out with a somersault senton as Drew Gulak is shown watching backstage, upset over the dive from Ali. They are still outside where Nese yanks Ali off of the barricade then drops him on the announcers table. Back inside, Nese taunts the crowd and said his body is what hard work looks like. Ali surprises Nese with a small package for a two count but Nese gets up and turns him inside-out with a clothesline. Nese deadlifts Ali and tosses him on the ropes and gets two before using the torture rack. Nese then almost gets the win with a double jump moonsault. Ali cuts Nese off of the top with a dropkick then eventually takes him off with a hurricarana as both men are down. Ali is up first and lands a kick then hits another kick from the apron before hitting a neckbreaker. Ali runs across the apron to take Nese down with a hurricarana then back inside gets two with a crossbody. Nese yanks Ali into the corner then they trade strikes until Nese uses the matrix to avoid a kick then takes down Ali after a flurry of strikes as both men are down. Ali floats over on a pumphandle slam then his a floating DDT before getting the win with an inverted 450 (10:45) ***1/2. They cut backstage to show an upset Gulak watching on the monitor.

Thoughts: I thought this was a really good match. Both guys showed off their athleticism and the crowd responded well at times. The cuts backstage to Gulak being upset over Ali’s high-flying amused me as that feud continues. Nese gets a lot of TV time and has done well in the ring but has been losing quite a bit now.

Ariya Daivari is berating the man who did an insufficient job shining his Persian boots. He walks away and brushes by Tozawa and yells at him about how expensive his silk shirt is but Tozawa starts chanting as Daivari walks away. I guess once Tozawa is done with Kendrick he will have a match with Daivari.

We get a video package on Cedric Alexander to hype his return.

The Brian Kendrick vs. Akira Tozawa

Kendrick cheap shots Tozawa before the bell but Tozawa fights back and chops away. He gets the crowd to mimic is chant then fakes out Kendrick before hitting an elbow smash. Kendrick bails but avoids a potential diving attack so Tozawa runs out and beats him down. Kendrick is able to yank Tozawa into the table then hits a Sliced Bread #2 off of the steps. Tozawa barely beats the ten count then Kendrick gets two with a double underhook suplex. He stretches out Tozawa for a bit then starts stomping away. Kendrick uses a reverse chinlock as he claws and pulls at Tozawa’s face. He now uses a cobra clutch and yells at Tozawa, who is able to get out. Kendrick uses more kicks but Tozawa fights back. He takes Kendrick down with a hurricarana then sends him off of the apron before flying out with a tope. He rolls Kendrick inside and catches him with a Shining Wizard for a nearfall. Kendrick comes back with a kick to the face then hits a Dragon Suplex and rolls into the Captain’s Hook. Tozawa escapes from a Sliced Bread #2 and crawls underneath Kendrick’s legs to hit a Saito suplex for a two count. Kendrick rolls away from a senton and puts on the Captain’s Hook once again but Tozawa escapes. Kendrick tries for another Sliced Bread #2 but Tozawa rolls through and cradles Kendrick for the win (9:42) ***1/4. After the match, Kendrick attacks Tozawa and rams him into the steps a few times. He tries to sandwich Tozawa between the steps but is stopped by the referee. Kendrick then grabs the mic and says Tozawa’s last lesson is that no one messes with The Brian Kendrick as he throws the mic at Tozawa, who is out on the floor.

Thoughts: The match was good. However, the post-match stuff did not do it for me as this is a feud that needs to wrap up soon, not continue. I have enjoyed it but its now just repetitive and Tozawa can be used to do something bigger as he gets one of the best responses from the crowds in the entire division.

Final Thoughts: Two good matches and a solid opening segment make this a much better show than last week. Having two long and competitive matches helped and its something they should focus on going forward with the show. The Fox romance stuff is still awful and Daivari does not stand out in the ring or with his character work but he also seems to be in line for getting a push. Watch the opening segment and both matches and you should be satisfied as a fan of the show.