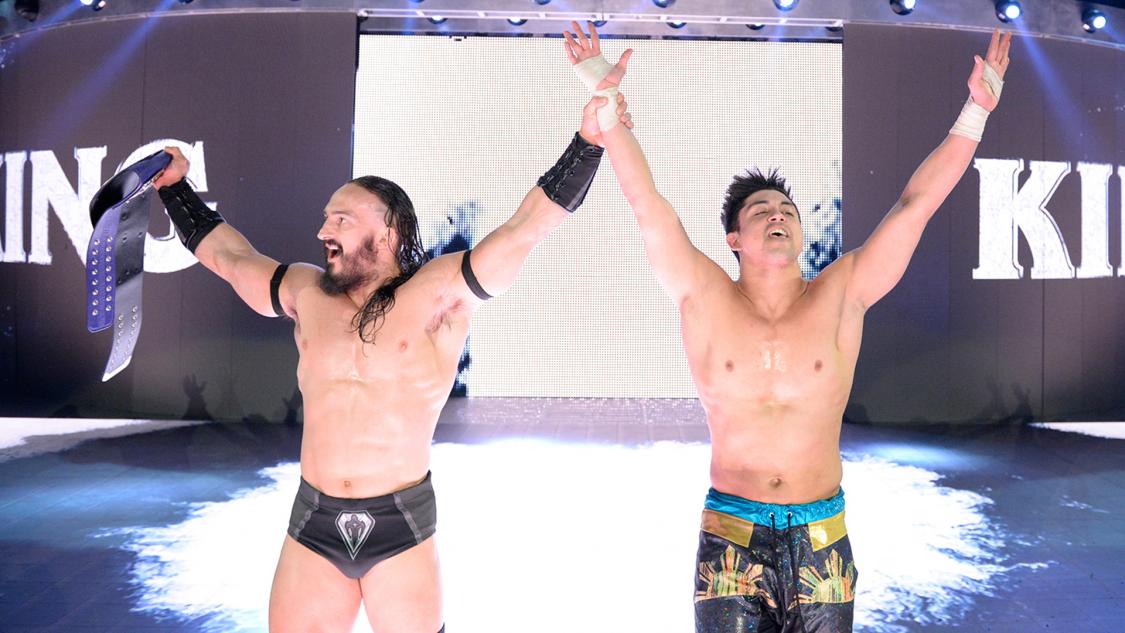 From the TD Garden in Boston, MA

The show starts with a video package on Neville retaining the Cruiserweight Title at WrestleMania then highlights from last week’s #1 contender match with Austin Aries winning, setting up his rematch against Neville at Payback.

Tonight, we will see TJ Perkins vs. Jack Gallagher as Phillips reminds us that earlier tonight, Perkins called Gallagher a “rejected circus freak” among other things.

We see clips from last week where Akira Tozawa faked an injury and outsmarted Brian Kendrick to win his match then gave him his first lesson, mocking what Kendrick did to him at the beginning of their feud.

The Brian Kendrick vs. Mustafa Ali

Kendrick works the arm on the mat to start as the announcers bring up Drew Gulak telling Ali to give up his high-flying ways over the past couple of weeks. Ali is able to use his speed to his advantage and snaps off a hurricarana before flying out with a crossbody. We see Gulak backstage wearing a suit watching the match on a monitor as Kendrick crawls underneath the ring and comes out behind the steps and yanks Ali’s arm into the post. Back inside, Kendrick fishhooks Ali and has him bite the bottom rope then kicks it as that gets two. Kendrick tries for the Captain’s Hook but Ali blocks it and fights out of a Cobra Clutch but Kendrick cuts him off with a forearm smash. Ali comes back and surprises Kendrick with a small package then a spining heel kick as both men are down. Ali cuts off Kendrick’s charge then hits a dropkick He comes back with a clothesline then a roundhouse kick from the apron before getting a nearfall with a neckbreaker. Kendrick sidesteps a dive then connects with a leg lariat for two. Ali fights out of a torture rack and knocks Kendrick down before heading up top. Kendrick cuts Ali down then puts on the Captain’s Hook. Ali is a fingertip away from reaching the ropes but the bell rings. However, referee Charles Robinson yelled that he never signaled for the bell and wants to know who rang it as we see a man take off a hat and reveals himself as Tozawa. Kendrick is livid then Ali kicks him from the apron and hits the inverted 450 splash for the win (9:22) **3/4. After the match, Tozawa lets Kendrick know that was lesson #2, which is that appearances can be deceiving, then leads the crowd into his chant.

Thoughts: Pretty good match here. Ali does some good stuff in the ring but is not connecting with the crowd. The screaming stuff isn’t going to help much as Tozawa already uses his screaming chant that is over a little bit. I think Ali showing off his abilities in the ring is what will get him over. I did like the stuff with Tozawa as his feud with Kendrick is still entertaining and I expect a blowoff match to happen fairly soon.

We see clips from RAW where Neville told Perkins he was being overlooked and distracted Aries to allow Perkins to win the match. Perkins then attacked Aries from behind.

Backstage, Dasha Fuentes is with TJ Perkins. She asks him about his attack on Aries but Perkins says it’s about what Aries did to him and how Neville was right as he is the victim and was a gift to the Cruiserweights until Aries took that away. Gallagher interrupts and does not know what possessed Perkins to act like this and wants him to take a more gentlemanly approach. Perkins makes fun of Gallagher’s accent briefly and says Aries is not the only one to have benefited from his bad luck before walking away.

We see a clip from last week when Swann let Alicia Fox know he was the one that gave her gifts, not Noam Dar. Ocean takes control early as Graves notes he is a “defender of the sanctity of love.” Ocean works a chinlock but Swann escapes and fires away. He gets two with a jumping frog splash then hits a roundhouse kick before he puts Ocean away with a Phoenix Splash (2:22) *.

Thoughts: Not much of a match here as Ocean is an unknown yet got in a decent amount of offense against Swann, a former champion.

After the match, Swann addresses the WWE Universe and said he told the truth last week about giving gifts to Alicia Fox then is about to give the reason why he did this but Dar himself interrupts. Dar calls Swann a liar and that everyone knows he has been sending the gifts and wants to know what kind of man interferes in another’s relationship as they go back-and-forth until Alicia comes out. Alicia tells Dar she believes him and that Swann is a liar. She also has been noticing Swann checking her out then someone comes out with a gift. Dar takes it and says he got it for Alicia and tells Swann to leave. Dar gives her the gift and says its a surprise as Alicia opens it up and has powder exploded all over her as Alicia is upset while Swann dances in the aisle.

I really did not care for this segment and it failed to get over live. Some might find Dar entertaining with Fox but when it comes to a feud, I do not get how this was supposed to get people behind Swann either as he is trying to get someone else’s woman and Dar is not abusive, just a goof. Swann is a highly charismatic performer but the company has done him zero favors in presenting him to the fans.

Dasha is now backstage with Austin Aries and asks him about Perkins comments. Aries says Perkins is wrong in thinking Neville is his friend and has a lack of judgement, proven by still dabbing in 2017. Aries then tells Perkins that Neville is using him as a buffer to help him retain the Cruiserweight Title at Payback but that does not matter as he has been in this situation before and finishes eating his banana before leaving.

Perkins opts to play with his hair instead of engaging in the pre-match handshake. Gallagher uses a headlock takedown to start then escapes from the mat by walking on his hands. He uses his knee to ground Perkins with a hammerlock then twirls his mustache and has some fun. Perkins takes Gallagher down with a headscissors then dabs but Gallagher reverses the hold as he is able to one-up the former champion. Gallagher dropkicks Perkins outside then grabs his umbrella and is about to fly out but Perkins walks up the ramp. Gallagher then dabs in the middle of the ring to mock Perkins and rolls him up for two. Gallagher balances himself in the corner then hits a mule kick but Perkins is also able to show off and hangs himself up in the ropes. Perkins blocks a sunset flip then DDT’s the foot of Gallagher as he goes to work on the leg. He slingshots in with a tope con hilo for two then goes back to working the leg. Gallagher tries to fight back but Perkins cuts him off and gets two with a dropkick. He hits a suplex then uses a butterfly lock while stretching out Gallagher’s knee. Gallagher floats over on a suplex and hits a few uppercuts then an overhead suplex. Gallagher catches Perkins with a gutwrench suplex for two and tries to work the arm but Perkins comes back with a springboard forearm smash. Gallagher perches Perkins up top for a super back suplex and hits the move for a nearfall. Perkins rolls outside as Gallagher tosses him back in but Perkins flips him over into the kneebar as Gallagher desperately rolls around and makes it to the ropes as he screams in agony. Gallagher comes back with a backbreaker but clutches his leg. Perkins knocks Gallagher outside but gets caught between the ring apron and skirt trying a wrecking ball dropkick as Gallagher headbutts him in the chest. He rolls Perkins inside and gets two then they slug it out until both guys take each other down. Gallagher’s knee gives out trying the Gentleman’s Dropkick then he is sent into the post as Perkins hits the Detonation Kick for the win (15:32) ***1/2. After the match, Neville comes out on the stage and raises Perkins’ hand as Perkins stares at the Cruiserweight Title.

Thoughts: Really good match that is worth seeking out. Also, a good, clean win to establish Perkins as a heel. I think the heel turn can revitalize Perkins and he can succeed in this role. I also liked how Perkins still maintained his eyes on the title at the end to show he is out for himself and not just a pawn for Neville to use.

Final Thoughts: Overall, this was a solid show. The main focus was on Perkins turning heel and they established him well here. The Tozawa/Kendrick feud continues to entertain and they are at least trying something with Gulak and Ali. The only stinker was the Dar/Fox/Swann storyline but besides that it was a focused show worth checking out.