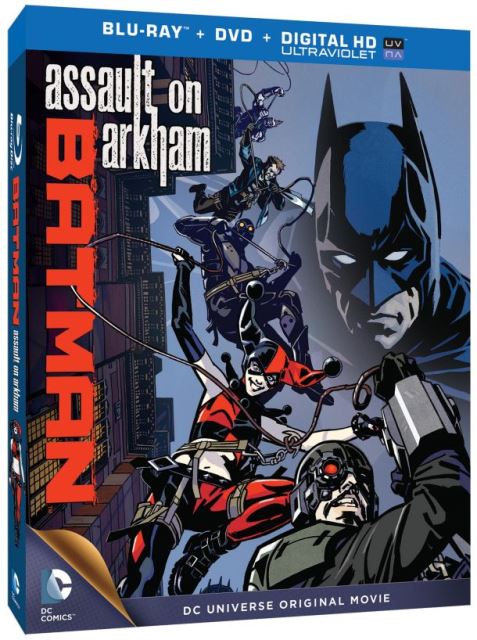 Rooting for the bad guys is fun sometimes and in the case of Batman: Assault on Arkham, it’s a whole lot of fun.

The story takes place in the world of the Arkham Asylum/City/Origins/Knight video game series, with this story taking place after Origins but before the first game, Arkham Asylum. Kevin Conroy is back in the saddle as Batman and brings his usual gravitas to the performance with brains and brawn, though he’s not around much.

Make no mistake, this is the Suicide Squad’s show. That means this isn’t a typical Batman mystery/adventure movie. Oh no, this one has a lot of 70’s heist movie tropes and it uses them to great effect, mostly. From the opening sequence that introduces each member to some of the most over-the-top violence in a DC animated movie yet, this one is all about pushing the limit of that PG-13 rating.

The team is assembled to go after Riddler inside Arkham Asylum. As usual, Amanda Waller (in her classic pre-New 52 form and voiced by CCH Pounder who made her infamous on the Justice League and JLU animated series) puts the team together from some classic B, C and D-list villains. Not everybody is going to make it out alive and some of the death scenes come as surprises while some are kind of predictable.

Riddler is holding information about how Waller assembles her little covert criminal teams for government missions too secretive or dirty for the authorities to take part in. But that’s not the only reason she wants him dead. As the story unfolds, lots of layers begin to form and make it a much more complex narrative than it necessarily had to be. But that’s all part of the fun!

Deadshot is back in the saddle as the de facto leader of the group consisting of Harley Quinn, King Shark, Killer Frost, Captain Boomerang, Black Spider and KGBeast. Deadshot is a bit more stoic than you might expect for his usual portrayals, but he does have a few good cut-loose moments. And Harley Quinn (voiced by one of her usual talents, Hynden Walch) has a tendency to steal a few scenes. The banter between Deadshot and Boomerang is pretty solid, too and look out for King Shark to get in a few funny moments.

There are a few moments that might seem a little over the top to some fans, though. Aside from the overuse of blood in some scenes, there’s also a seemingly random sex scene thrown in that does wind up sort of playing to a character’s advantage. Some are going to be upset over which characters are used for this, but thinking of it in the broader terms of the story, it serves a greater point than just being there for the sake of having it.

Fans of the game series are sure to catch all sorts of Easter Eggs throughout including famous locations and a few familiar faces and voices. Nolan North even drops in for a quick Penguin visit just to make sure we remember he’s a part of the series.

The biggest surprise of the show was Troy Baker’s Joker performance. He’s not Mark Hamill, but he does a fairly convincing impression of him at times. And his own nuances in the role made it a fun turn for the Clown Prince of Crime, even if he is playing a smaller role.

It’s hardly a necessary viewing experience for fans of the games, but Assault on Arkham makes the most of what it has and comes out a fun time for the adults who still love their cartoons. If you love fast-paced action and quick-witted dialog, you’ll want to check this one out.