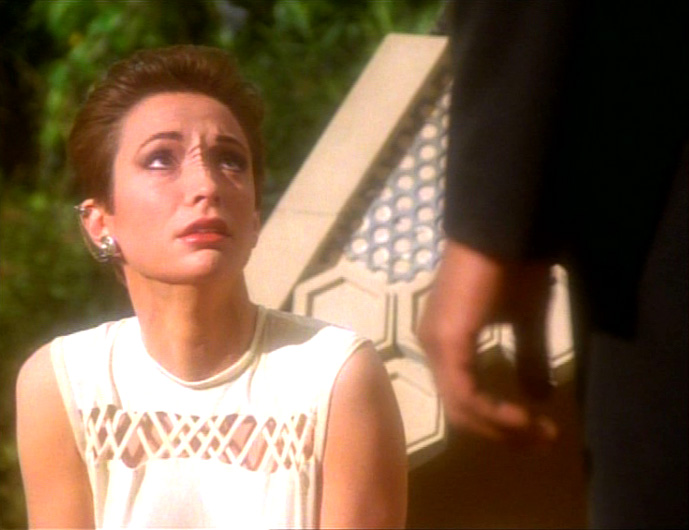 It’s a common enough message. There are often people who see themselves on some level and in some context as avatars of change, specifically of progress, a very particular sort of change drenched in normative implications. Progress demands that we move incessantly forward, toward whatever populates the agendas of whoever is advocating it. Progress can demand that we give up the trappings of our now-former lives, while creating a world that’s passed us by. Progress can mean the tearing down of dominant paradigms, or a shift in resources that shakes up some of the pieces but leaves the board in place. Progress can be the rallying cry of the revolutionary, or the disguise adopted by those seeking only to reinforce a social order that’s already tipped in their favor.

Kira Nerys is still somewhat haunted by insecurities regarding which side of that divide she stands on. When we first see her beam down to Jeraddo, Bajor’s fifth moon, she’s on a simple mission to evacuate its inhabitants before the moon’s core is tapped as an energy source. She has no deep ideological commitments or objections; she’s merely been given an order, without any particular reason to doubt it. Nor does she expect to find any resistance, until she meets Mullibok.

The low-tech citizen-farmer is a standard Star Trek trope: while in terms of worldbuilding it’s a slight strain on credulity, characters who choose not to avail themselves even of technology we in the audience possess build additional contrast to the main characters and their heightened science-fiction artifice. The process of making dinner in Mullibok’s home is only barely more intensive than replicating a meal on DS9 from a televisual perspective — aside from a short scene in Mullibok’s kitchen, the meal appears between scenes — but the rustic nature of the surroundings emphasizes the contrast. 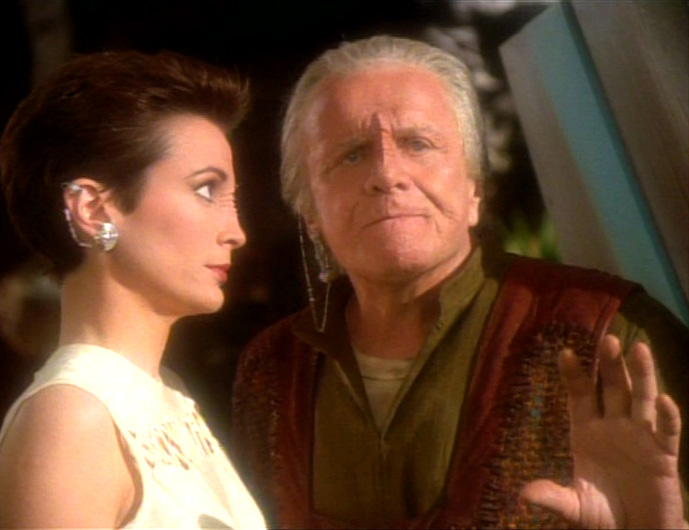 Mullibok, as played by veteran television actor Brian Keith, alternates between “wry old man” and “angry old man,” with both being variations on his singular stubbornness. Stubbornness is also one of Kira’s specialties, and the tug-of-war for control of their interactions defines the characters’ relationship throughout the episode. Mullibok starts by minimizing Kira, almost negging her: he insults her uniform, says she’s “halfway pretty,” calls her “girl” twice — once before she tells him to stop, and once after — but Kira knows when someone is only trying to make her angry so she’ll go away. Kira appeals to his sense of altruism, or utilitarianism — tapping the moon’s core will help hundreds of thousands of people on Bajor, at the cost of moving a handful of people off of Jeraddo — but he stands firm. Mullibok finally hits on a way to unsettle Kira by asking about her experiences fighting the Cardassians, tapping into the anxieties of the revolutionary-cum-functionary and implying that his small form of resistance comes from the same impulse, while not explicitly taking on a political cause to rail against the evils of eminent domain seizures. (Mullibok himself escaped from Bajor and never returned to aid in his people’s resistance movement, as Bajor for him represented only pain, and oppression, and degradation — by now his violence has scabbed over, and he is all scab.) As in any good Michael Piller production, the focus is placed squarely on the characterization. The episode compounds the pressure on Kira by also making Mullibok a vague father figure, the first time Deep Space Nine provides one for her, when she mentions her father immediately after meeting him and then quickly develops a complex, tense but bittersweet dynamic with him. This marks the point where DS9’s writing staff figures out that Kira works best in personal, intimate stories focused on her internal conflicts, that while she can certainly work in an action-oriented story, her character can be explored much further, as it will be in just a few weeks. “Battle Lines” was an intermediate step, but that episode turned out to have too many other things it was trying to focus on.

The rest of “Progress” is structured as a series of vignettes as members of the DS9 crew speak with Kira on Jeraddo, broken up by another B-plot featuring Jake and Nog. While the new Noh-Jay Consortium is not learning a Very Special Lesson this week, they’re still implementing their brand of multiculturalism, combining the lobe-tingling that alerts Nog of profitable opportunities with Jake’s flexibility, his willingness to trade when latinum doesn’t immediately present itself. It’s a fun way to structure their plot and to have the two characters chafe against each other while sharing the same goal, and a premise that the series will come back to quite fruitfully in the future. (Watching this after seeing the rest of the series, it might seem odd that the two engage in a series of deals for only five bars of gold-pressed latinum, but of course, children learn the value of money gradually.) Most importantly, their first trade sees the introduction of the self-sealing stembolt — not just any stembolts, self-sealing stembolts, the best in the sector — an object of totemic importance to Deep Space Nine and one of writer Peter Allan Fields’ enduring contributions. If only any of the characters knew just what they were. 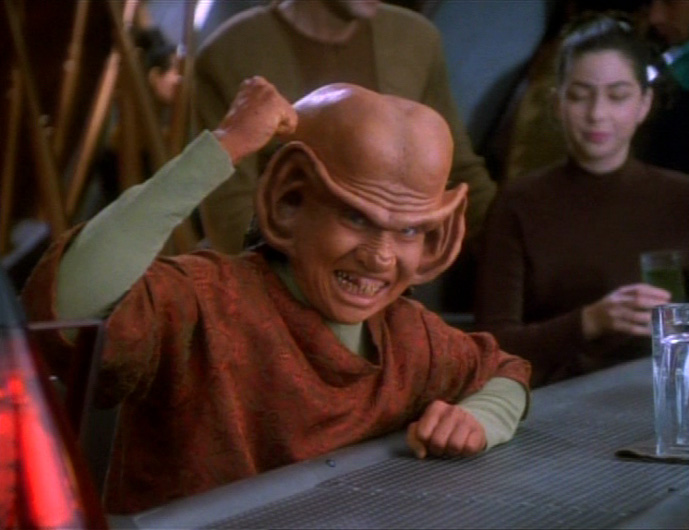 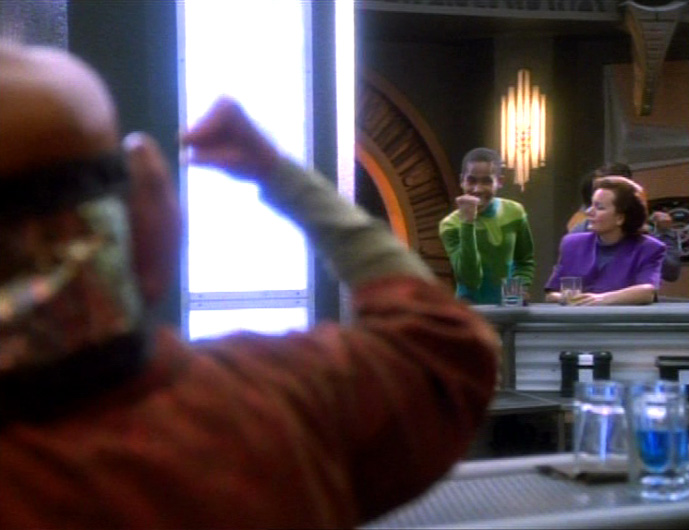 On Jeraddo, Kira’s existential conflict is crystallized by a visit from Commander Sisko. He appeals to her first as an officer in the blunt terms they’re both adept at — “you have a job to do here, Major, and you’re not doing it” — then as a voice of empathy — “I understand you’re used to sympathizing with the underdog…but you have to realize something, Major: you’re on the other side now” — and finally as a friend — “When I first met you, Major, I thought you were hostile and arrogant. But I was wrong. Bajor needs you, and I need you.” But Kira was hostile and arrogant at the beginning of the series, before “Past Prologue” forced her to concede that she had to actively help the Federation, and before “Battle Lines” forced her to confront the very real concern that a life defined by violence has left the practice of war as her only worthwhile skill. “Progress” presents her in a more mature light, struggling with what it means to her that she must be the one to forcibly relocate one man, in one place, who only wants to be left alone to tend to his garden and to finish building his kiln.

Mullibok’s kiln, a device for containing great heat and channeling it for productive purpose, becomes a stand-in for the man himself; as Kira experiences her existential crisis and works through the issues brought up for her, including a brief plea to change the entire energy-tapping operation to a less efficient model that would allow Mullibok to remain in his home, she begins filling in tiles herself. If Mullibok is going to fret about an unfinished kiln, Kira is going to finish it. She quite symbolically takes off her uniform jacket to work on the project, then emerges with it back on as Mullibok is setting the final tile and firing the kiln for the first time. Kira has tolerated Mullibok’s obstinancy, and must once again demonstrate hers, this time by skipping any further pointless debate and shooting the kiln, using its fire to set Mullibok’s cottage ablaze. The old ways must literally burn and crumble for the new ways to take hold. Mullibok’s absolutism cannot stand against the welfare of hundreds of thousands of other Bajorans. One man cannot resist the needs of a society he’s tried to remain sovereign from, even when that society is distilled into one woman who never wanted this particular responsibility. She has it nonetheless, and must tend to it. It is easier to destroy than to create, as Star Trek tells us; Kira must hope that she has done both.

The march of progress continues apace, as it must, and while Mullibok’s choice (as well as the fact that he never really had a choice) is made clear by Kira’s act of arson, “Progress” still ends on a somewhat ambiguous note: Mullibok gives no sigh of resignation, no indication that he’s understanding of what Kira’s had to do in the name of progress. Kira calls to be beamed up — for both of them to be beamed up — but we’re not even shown this. Mullibok is allowed to retain his unyielding stance to the end. Esther Freisner’s Deep Space Nine novel Warchild, however, includes a short scene showing that Mullibok’s found a place on Bajor where he can apply his gardening skills in relative peace, in which he reflects on his forced eviction:

When [Kira]…persuaded me to leave my home, I thought it would kill me. It didn’t. So the next thought I had was to find myself a place where people would appreciate me for what I am: living proof that losing your home isn’t the end of the world. A walking, breathing lesson in hope, as it were.

The idea of Mullibok as a “walking, breathing lesson in hope” is an interesting direction for the character, to be sure, but one that feels like tying up a loose end that was best left untied (while accepting that the use of guest characters, on a spectrum from blink-and-you’ll-miss-it references to entire stories dedicated to fleshing out backstories for old episodes, plays a significant part in the aesthetic of the Star Trek novel). Because the truth is that sometimes progress — whether material, social, or both (as the distinction is indeed a fine one) — really does roll over people’s lives. Someone is going to be starting a career in urban horse care at the precise historical moment that automobiles conquer the cities. Someone is going to be the long-tenured worker who’s replaced by an automated assembly line, subjected to hard times. Someone is going to be up against a wall, come the revolution. Progress can be rightly measured by what it’s wrought in both directions, by whom it helps and whom it hurts, and by the balance between its benefits and its toll.

Mullibok has the life Kira does not have, and which might never have occurred to her to want — one free not only from war but from any involvement in ongoing strife, ongoing efforts to improve the material conditions of Bajor, and the movements of the galaxy. But a short stay in Mullibok’s world can’t shake Kira’s harsh utilitarianism, and the needs of the many roll over one man’s sense of security.

May we all be spared such a fate. 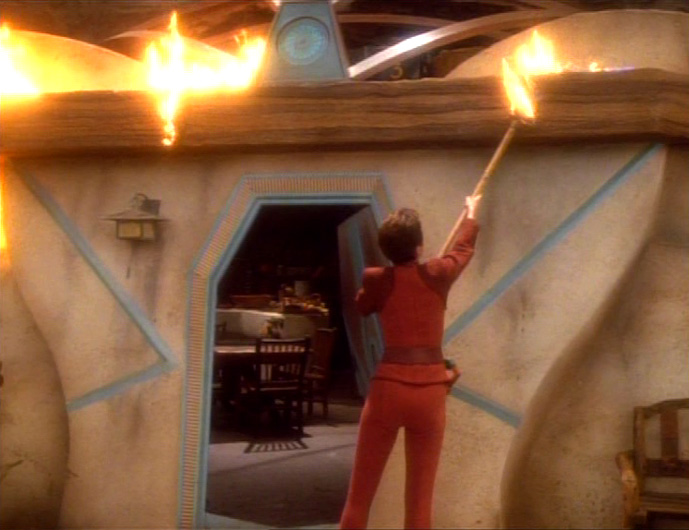 Star Trek: Deep Space Nine season one is available on DVD.
Excerpts from John Debney’s score to “Progress” are available on CD.
Screencaps courtesy of TrekCore.