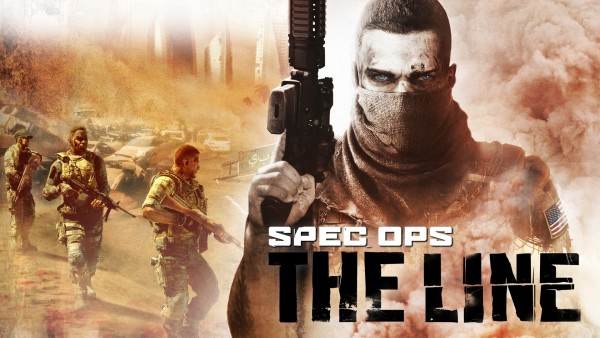 Spec Ops: The Line is the kind of game that the gaming industry would relish its being buried in obscurity. Few know that the Spec Ops franchise has been in circulation as long as Tom Clancy’s Rainbow Six series despite the variance in their production values. We’re talking back when “terrorism” being used as political leverage and “Modern Warfare” being a trademarked video game franchise would have been anachronisms. Unfortunately, Spec Ops was developed as a B-tier shooter competing against A-tier franchises such as Medal of Honor, and was further marginalized by its competition in mediocrity because it lacked a distinguishing characteristic such as the GHOUL engine in Soldier of Fortune.

Games like Rainbow Six and the Spec Ops series were boldly aggressive for their time. See, if one were to track the origins of the FPS, taking note of Wolfenstein, Doom, Duke Nukem 3D, and Quake, then one must acknowledge how brilliant the designers of these games were.  Companies like Id Software and Apogee Software (A.K.A. 3D Realms) were developing games where enemies explode into pixelated clouds of blood and guts long before Scorpion ever said “Get over here!” Up until Mortal Kombat hit the shelves with its MA-13 rating on the Genesis, FPS games had eluded detection of those who would deem their content inappropriate for their target audience. Being published for PCs-which in the late 80’s and early 90’s were considered expensive arcane luxuries rather than necessities for functioning in and interacting with the modern world-they avoided the eyes of the mainstream, but that is not the only reason why they were “invisible.” In the early FPS, enemies were monstrosities.

Wolfenstein established the theme of WWII Nazi-saying as dedicated genre. Particularly in the American imagination, Nazis are historical boogeymen. It is practically taboo to consider that Nazi soldiers, especially those in the Gestapo, were living, breathing human beings in the flesh who may have had wives and children of their own. Justifying the violence in Doom is a slam dunk; the Doom Marines slaughter demons from hell, where zombified soldiers do not count as human. In Duke Nukem 3D, the titular character defends earth against an alien invasion. And so on.

What if I were to tell you that once upon a time ago, the Nintendo 64 would introduce the FPS genre to consoles (notwithstanding games like Zero Tolerance)? Goldeneye 007 was revolutionary and made games like Halo possible to imagine while Turok and enjoyed its dedicated audience of dinosaur hunters. But in these games, enemies don’t really bleed, so the effect of death is even more imaginary than what is already established by the suspended disbelief of a video game. When games like Siphon Filter for the PS1 and Perfect Dark for the N64 were released after  the aforementioned Rainbow Six, gamers were then given the authority to shoot people instead of mutants, aliens, and cyborgs and they would bleed indeed. However, these enemy types are typically thugs, gangsters, mercenaries, and terrorists. In other words, enemies became more anthropomorphic, less monstrous, yet monstrous misanthropes nevertheless.

Enemies in modern games featuring contrived plots justifying simulated genocide remained monstrous yet less abominable only because they resemble humans. One need not have a lot of Cultural Capital to pull some generic woman crying “YOU MONSTER!” in response to some nefarious action , usually capable by loathsome characters such as The Governor from The Walking Dead (comic book; not the heavily-censored TV show) or Hannibal Lecter. Monstrosities can’t be allowed to coexist with humanity. They must be isolated or preferably destroyed.

Spec Ops: the Line disrupts the wartime imaginary by forcing the player to reflect upon his or her participation/interaction and compliance with a genre rendering massacre as not just an acceptable solution to the world’s problems, but a heroic one; and it innocuously masquerades itself otherwise as a Call of Duty clone.

SO:TL is a skillfully designed game in the way that it drops hints during its story/campaign mode concerning its own self-reflexiveness. It is a video game, and like any other game, one finds themselves relatively free of political gravitas for entertainment purposes, enjoying the game for what it has to offer in its post-9/11 generic war-torn Middle Eastern country backdrop, and then all of a sudden, it kicks the player in the genitals. I know I certainly felt like I got kicked in mine.

Playing as Delta Force operative Captain Martin Walker, you and your team, Lieutenant Alphonse Adams and Staff Sergeant John Lugo are sent on a mission to scout arguably the most westernized territory in the Middle East: Dubai, a scion of capitalistic excess in all of its gaudy opulence (photo of Dubai hotel). SO:TL impressively transforms utopia into a hellish wasteland, a dystopian projection of what becomes of paradise once hegemony ceases to protect itself from an underclass invasion and/or should the oppressed populace upon whose blood, sweat, and tears dominion is established decide to give status symbols such as the Burj Al Arab the middle finger among other forms of resistance and rebellion. Before the mission, we are told that the “Damned 33rd Infantry Battalion of the United States Army volunteers to rescue the civilians abandoned by the United Arab Emirates who are trapped in the worst dust storms ever known to humanity, but it defects, with the only remaining message relayed from the commanding officer being, “This is Colonel John Konrad, United States Army. Attempted evacuation of Dubai ended in complete failure. Death toll: too many,” which are the opening lines of the entire game. Walker looks forward to this reconnaissance mission because Konrad once saved his life during a war in Kubal and he is now looking to return the favor.

The game begins in medias res with a helicopter chase/escape scene that ends in a crash, and flashbacks into what I just described, so the idea is that the player will work his/her way up to the helicopter scene while filling in the blanks. The recon mission—the search for survivors—becomes quite perilous when insurgents begin shooting at your team. From there, the game launches into the expected conventions of the FPS: enemies shoot at you, and you shoot back; the insurgents are no longer people, but “hostiles” who must be eliminated. Thus they become for the player the same kind of “monstrosities” that we have encountered throughout FPS tradition. In the interim, SO:TL builds upon prior player training in the genre by foregoing questions concerning why the insurgents are shooting because when was that ever important in a FPS? Like with Lethal Enforcers, the player is always the good guy. Furthermore, Steam Achievements encourage players to use rifles and shotguns, aim for headshots, utilize squad-based tactics via quickeys to give Adams and Lugo orders, and all these other incentivized goals which express supposed mastery of SO:TL—reminders that it is, in fact, a game.

But wait. Should there even be game to play? After all, team Delta Force was sent for reconnaissance of the Damned 33rd, and should have left upon discovery of the zone being hot. Instead, Walker presses on, believing that Konrad has some sort of control over the situation  and that there has to be an explanation for it all, or, that ” contrived plots justifying simulated genocide” that I mentioned before.

I reiterate: the (monstrous) insurgents are replaced by a greater threat in the renegade Damned 33rd. So the enemy shifts from amateurs with automatic weapons to highly trained killing machines–US soldiers. In case the player has been desensitized by previous experiences playing games where the focus on enemies takes a polar shift and there is no consideration of its purpose besides “mor (sic) targets,” your teammates–especially Luco– make their reservations known concerning shooting US soldiers.

Since it turns out that Konrad is a figment of Walker’s imagination, it becomes apparent that SO:TL alludes to the Call of Duty: Black Ops series where Alex Mason imagines that Viktor Reznov plays a role in his victories. Except that there are no heroes in SO:TL because virtually exterminating practically every person Walker’s team encounters is not heroic at all.

As far as modern FPS are concerned, only Medal of Honor (2007) had me not ask myself, “how many more goons am I going to shoot?” Again, “goons” is simply another way of saying “enemies” or “monstrosities,” though “goons” is probably the best word to use because in a typical FPS the AI is either atrocious and “goons” are either cannon fodder or they cheat and can hit you from a mile away and through walls like in the Far Cry games. Of course, there are a few exceptions such as F.E.A.R. Still, true to FPS tradition, SO:TL often reminds the player that s/he is playing a “military simulation” yet fighting an entire battalion with just three soldiers.

The ridiculousness of this realization made me laugh out loud. By the end of the game, a handful of surviving members of the Damned 33rd–who still outnumber Walker–surrender to him despite him being the seriously wounded sole survivor of his squad. Wouldn’t they just kill him at that point to exact vengeance for their fallen friends?

Yeah, Luco and Adams don’t survive; after the “flashback” helicopter crash, the team is separated, and Luco is lynched by a mob of civilians who are Damned off that you naively or intentionally assisted CIA Agent Jeff Riggs sabotage the region’s remaining water supply. Well beyond the notorious white phosphorous scene, SO:TL gives players the choice to retaliate against these civilians for what they do to Luco even though YOU are the one who started this mess in the first place! I chose to first try to walk through them, and when they hit me back, I either whopped one upside the head with the butt of my rifle, or shot in the air (with Adams’ assistance) to disperse the crowd. In the pattern of SO:TL, there is a special loading screen for those who choose the other option as well as an appropriately-named Steam achievement called “A Line: Crossed.” If you still have a soul, you’ll get “A Line: Held.”

After Lugo’s death, Adams absconds all ties to Walker except that he remains the commanding officer as the game elevates the level of passive-aggression. In an eventual scene where the two soldiers are cornered, they have a final exchange:

Adams: “This mission is a failure!”

Walker: “Not as long as I’m still breathing!”

Adams then pushes Walker over a ledge, sacrificing himself to enemy fire while Walker proceeds to the final portion of the game where the remnants of the Damned 33rd and “Konrad” await him.

Walker is so concerned about staying alive that he apparently does not care about the lives of anyone but his own.

Just like a player would while playing a video game, right?

Who is the monstrosity now, SO:TL asks?

In actuality, there are plenty of instances where the game begs the question as to where “The Line” exists. When one thinks about the idiomatic expression “crossing the line,” then one is referring to a boarder, a threshold, a boundary, where upon passing over this physical or imaginary boarder becomes an act of a transgression, hostility, defiance, sin.

This game provides much for someone such as myself to contemplate and I did not even address everything. Still, I will draw “the line” here.

Seriously, though…who the ****made that painting? If Konrad is a figment of Walker’s imagination, that painting remains part of the scene even after all of the illusions are gone. #Inception