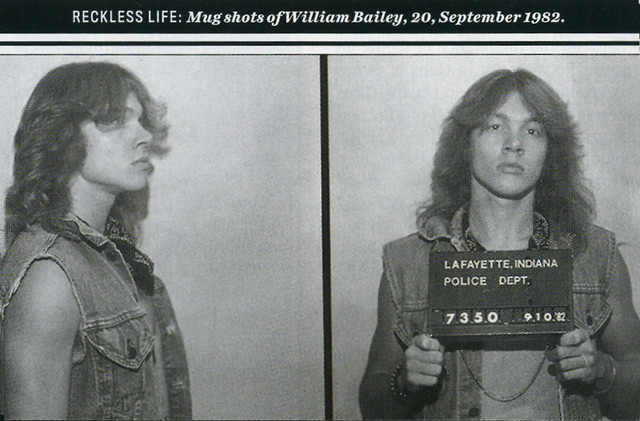 For a man who hit his peak in 1991, and who disappeared for almost a decade at the height of his notoriety, W. Axl Rose continues to entertain, amuse, and frustrate generations of fans. In spite of, or perhaps because of, the fact that he consistently gave authority and convention the middle finger, Axl remains one of the most googled musicians in the world today. Fans remain fascinated, despite a lack of coverage of Rose in the mainstream media.

His tours continue to draw, especially in Europe and South America, despite the fact that he is the sole original member remaining. But what is Axl after? I hope to dissect the myths, the legends, and the fallacies that have always followed Rose, and at the same time, maybe find out once and for all; what’s next?

A simple exploration through his home would change William Bailey’s life and perspective forever. At the age of 17, William was rifling through some boxes of papers at his home, which he shared with his stepfather Stephen, his mother Sharon, sister Amy, and half-brother Stuart. Contained in those boxes were papers that held the information he’d been looking for, the name of his real father, William Rose, Sr.

William Rose Sr. was twenty years old when his namesake was born, and his mother Sharon Linter was just sixteen. The pregnancy was reportedly unplanned, and, as with most young parents, the two were not meant to be lifetime partners. After a fight and a breakup when William Jr. was two, William Sr. kidnapped his young son, and allegedly molested him as he kept him from his mother, a fact that was discovered years later. William Jr., by then, was the biggest rock star on planet Earth, known as W. Axl Rose, and was undergoing past life regression therapy.

William Bailey reacted to the discovery of his true father’s name, by changing his name himself, another in a series of rebellious actions that had defined most of his adolescence. He would be known from then on, as W. Rose, not William, because “William was an asshole,” as he later put it. His father, who was known as a “troubled and charismatic” scofflaw, met his fate years later, as his son was chasing his dreams in LA. William Rose, Sr. is believed to have been murdered in 1984 by a fellow criminal.

The damage felt from a childhood of abuse still cut Rose deep, even decades later. In 2010, when countersuing music power broker Irving Azoff, it was noted in the suit that Azoff was trying to cause emotional distress by referring to the adopted name of “William Bailey” in his lawsuit, rather than the legal name of “W. Axl Rose.” “Azoff knew that the name William Bailey carries significant emotional damage,” it stated in the countersuit.

Rose’s war against authority could also be described as rooted in religion. His stepfather Stephen was a Pentecostal preacher, who had the family in the front row of church every Sunday, and often even more than that. The type of fathering he believed in could be described as all rules and no reward. “”We’d have televisions one week, then my stepdad would throw them out because they were Satanic. I wasn’t allowed to listen to music. Women were evil. Everything was evil,” Axl explained during an interview during the high point of his fame.

Young Axl wasn’t like the other children in his congregation. Sure, he was a choir singer, and performed at church functions with his stepbrother and sister, but he began to feel as if there was a curtain drawn around everything. A curtain that only he could see behind. “My particular church was filled with self-righteous hypocrites who were child abusers and child molesters. These were people who’d been damaged in their own childhoods and in their lives. These were people who were finding God but still living with their damage and inflicting it upon their children. I had to go to church anywhere from three to eight times a week. I even taught Bible school while l was being beaten and my sister was being molested.”

But without church, there may have never been an Axl Rose or a Guns N’ Roses. It allowed him the time to experiment with “different voices” during choir practice and it also gave him the opportunity to study and learn the piano. But Axl was being drawn in a different musical direction altogether. Citing songs such as Led Zeppelin’s “D’yer Maker,” and Elton John’s “Someone Saved My Life Tonight,” as well as a love for all things Queen, Axl began to think about starting a band. He knew just the friend to start it with, too.

Jeffrey “Izzy Stradlin” Isbell went to the same school as Axl, and was a few months younger. His favorite bands included Pink Floyd, Alice Cooper, and Led Zeppelin, and he later grew to be a big fan of the punk movement. He and Axl gravitated towards each other because of similar musical interests, and a few other things as well. “We were long-haired guys in high school. You were either a jock or a stoner. We weren’t jocks, so we ended up hanging out together. We’d play covers in the garage. There were no clubs to play at, so we never made it out of the garage,” says Izzy about his initial relationship with his future lead singer and co-songwriter.

Shortly after Izzy graduated in 1979, he was off to Los Angeles, leaving his buddy Axl behind. After the discovery of his real father’s identity, and his subsequent name change, Axl seemed on his way to following in William Rose Sr.’s footsteps. He became known as the local troublemaker and anytime there was vandalism or a robbery, young Axl was snatched from the streets, roughed up, and questioned.

“I’m fuckin innocent! They won’t break me!” Axl would sing later on, with great passion and anger, on the song “Out Ta Get Me.” It became the town rivalry, but instead of one man vs. one man, or a gang vs. a gang, it was just W. Rose vs. the Lafayette police force. If Axl didn’t hit the road, it would be a battle he would not win.

Today, there is a whole folder at the Lafayette police station, bursting at the seams with offenses committed by William Bailey, William Rose Jr., W. Rose, and so on. Public drunkenness, fist fights, theft, and I’m sure if they could just charge him with being out of the house, they would have. But Lafayette had a solution for this young punk. His criminal record was lengthy enough, they said, that they could charge him as a “habitual criminal,” and lock him up for a good long time. So “keep your nose clean”, they told him, “or we are gonna get you for good”.

The only left to do was what Izzy had done before him: W. Rose was going to California. He didn’t know where Izzy was, but he knew where to find him. He had no place to stay, but the streets were better than a jail cell. He had hitchhiked out a couple of times there and back before, but every time he returned, the cops were waiting for him.

He’d had his complicated teenager-in-love phase with a girl named Gina Siler. They did hallucinogens together. He wrote poetry for her. She bailed him out, and she watched him go from Bill to W. to Axl. He decided to go to LA for good. “This is it”, he thought, it would be all or nothing. He wrote her a final love note, and signed it “Goin’ For Broke, W. Rose”

This article was originally run at B-Sides.tv and Place to Be Nation thanks them for their permission to publish it. B-Sides offers columns on music: past, present and future.