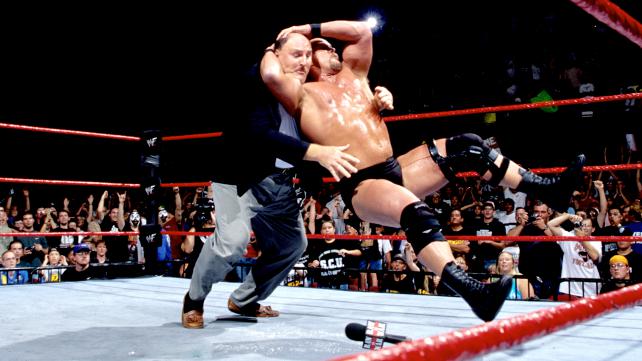 This week in 1996 (June 17th to be exact), WWF Monday Night Raw aired via tape from Fayetteville, NC. It was a fairly standard Raw for an era known for its somewhat bland and canned episodes that sometimes had molded over for four weeks before airing. This was one of those editions. The very back end of a lengthy Raw taping, this show was also the go home episode for that year’s King of the Ring tournament, thus we were treated to a pair of KOTR quarterfinal matchups to set up the final four for the PPV. The second of the bouts was fairly innocuous as Marc Mero knocked off Owen Hart, a match perhaps more memorable for Hart cracking Mero with his cast after the bell. However, it was earlier in the night that history was made right under our very noses and I doubt many realized what it meant at the time.

Approximately 10:20 into Steve Austin’s match with Savio Vega, Austin unleashed a brand new finishing maneuver. Since his debut, Austin had been using the Million Dollar Dream, an homage to his manager, Ted DiBiase. Following IYH: Beware of Dog, DiBiase was driven from the promotion due to a prematch stipulation in Austin’s strap match with Vega. With DiBiase gone, Austin now felt free to be himself and mix up his moveset as he set lofty goals at ascended up the promotional ladder. Thus, on this night, after a stiff kick to the gut, Austin turned around, grabbed Vega’s head and methodically dropped to his ass, jacking Savio’s jaw against his shoulder. Austin would pick up the win and the Stone Cold Stunner was officially born.

The move would become much more fluid and efficient as the months rolled on, but the customary kick to the gut always remained part of it. Over time, a middle finger was also added to the mix. Throughout wrestling history, every great competitor always had a memorable finishing hold that was generally easy to hook and immediately notify the crowd that the end of the match was nigh: Hulk Hogan’s Leg drop, Ric Flair’s Figure Four, The Rock’s Rock Bottom, Undertaker’s Tombstone, Jake Roberts’ DDT, Big Bully Busick’s Stump Puller…the list is endless. When Austin had arrived in WWF, he was already well-polished and had the makings of a big time superstar. But he needed that edge, that hook, that special something that set him apart from the crowd. That hook would be his attitude. But the Stunner wasn’t too far behind. In hindsight, can you picture Stone Cold Steve Austin delivering any other type of finishing move during his ascent and dominance? He would go on to deliver thousands and thousands of Stunners over the course of the next 18 years and each one reverberates just as loudly as the others. Sure, some have been more famous, such as Vince McMahon on the 9/22/97 Raw, Chyna at No Way Out 1998, The Rock at WrestleMania XV, Eric Bischoff at No Way Out 2003, but each and every stunner was delivered with the same gusto and energy and by early 1997, every single time the move was teased or connected, the crowd went bonkers. And I know I would be shocked if anyone reading this hasn’t delivered at least one Stunner to a friend over the last two decades as well.

So take a moment to pause and remember the creation of what is arguably the greatest finishing maneuver of all time. It was on that balmy June night that the world was introduced to a move that would help change wrestling history and make millions of dollars for its creator.