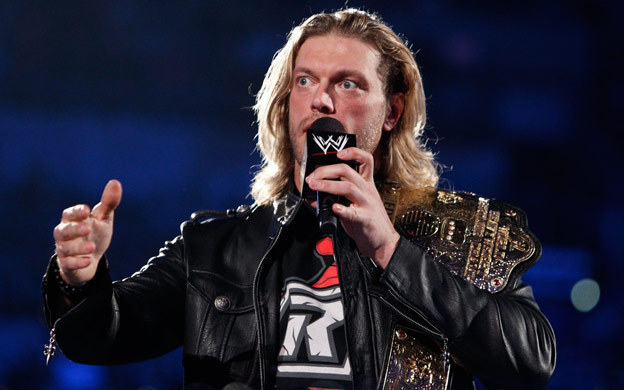 Today one of my favorite superstars of all-time celebrates his 40th birthday.  No, HIS birthday is July 27.  My second favorite wrestler of the modern era celebrates his birthday on October 30th.  That is Adam Copeland, the Rated-R Superstar.  Since Edge’s last match back at WrestleMania XXVII in Atlanta when  he defeated Alberto Del Rio to retain his World Title, he’s made the occasional appearance on RAW, even being part of a controversial Triple H promo last week.  Throughout the time Justin Rozzero and I have been writing our WWF/E PPV reviews, I always enjoy watching Edge’s matches, particularly when he broke out as a solo star in 2001, and as a major heel in late-2004.  The best part of Edge’s career is that he’s never been pigeon-holed as one type of wrestler.  He’s had high-flying matches, hardcore matches, technical matches, and brawling matches.  He’s faced every type of wrestler, from technical workers like Eddie Guerrero and Lance Storm, to power guys like Batista, to minimal move-set guys like John Cena.  He’s had spectacular matches, and average matches.  Edge was one of the most reliable guy in WWE throughout the Attitude Era and beyond, but was also a casualty of the hard-working WWE style and had to retire way too soon.

A guy who started as a typical WWE hardcore fan during the Federation years of the late-1980’s, Edge got into the business in the 1990’s indies with the awesome name of Sexton Hardcastle, working with best friend Jay Reso.  He had a non-descript WCW tryout match but then made his big splash in 1998 WWF.  Right as the Attitude Era was in its infancy, we started getting vignettes of this mysterious guy with long blonde hair and a long trench coat.  He made his long-awaited debut at SummerSlam 1998 in a mixed tag match with Sable.  From there he cemented himself as one of the greatest tag team wrestlers in WWE history, winning the tag titles an unprecedented 12 times with five different partners.  Seven of those reigns were with his best friend Jay, who we would know as Christian.  During a time when other than the main events, Attitude Era-PPV’s were pretty devoid of workrate, Edge and Christian would fire up crowds with early slotted tag matches with another pair of contemporaries, The Hardy Boys.  Their No Mercy 1999 ladder match in Cleveland was a harbinger of what would come from them and the product in general.  Thanks in part to Edge/Christian, 2000 became a renaissance of the tag team division when young talented teams were thirsting for the coveted Tag Team Championship.

Edge grew up in 2001 and would win the King of the Ring, feud with his former partner Christian and win his first real solo championship, defeating Lance Storm at SummerSlam.  He did first win the IC title back in 1999 at a Toronto house show for one night, losing to Jeff Jarrett the next night at Fully Loaded in Buffalo.  He would continue growing as a performer against the likes of William Regal, Booker T and in particular Kurt Angle.  He and Angle were “friends” as heels in 2000 but in 2002 they had some great PPV matches and once again Edge would work with someone different from the guys he faced in 2000-01.  In fact I would say 2002 was one of Edge’s most important years of his career.  He would have two of his most important feuds of his career with Angle and later Eddie Guererro.  These feuds would lock down Edge’s work in very different types of matches.  Then when he was really getting on fire, a debilitating neck injury would sideline him for almost all of 2003 and the first half of 2004.    From there he would start changing his attitude and really grow into a main event superstar, turning heel when he felt he was being disrespected after being booed when returning.

The next big moment of his career, and the one that would keep him in the main events for the rest of his career, occurred on April 3, 2005.  On that night at WrestleMania XXI Edge won the inaugural Money in the Bank ladder match.  He would hold onto it for the rest of the calendar year, which included news that would temporarily ruin Edge’s image.  It came to light that Edge was involved with WWE Diva Lita.  The problem was Lita was dating Matt Hardy.  That tryst would come to light and somehow lead to Hardy being fired, re-hired and have a myriad of superb matches with Edge.  Then at New Year’s Revolution 2006, Edge’s dream finally came true.  He cashed in his MITB briefcase on WWE Champion John Cena to win his first World Title.  Sure he held it for only two weeks and everybody hated it.  He’d eventually win the WWE Title back and in the process have the signature feud of his career with Cena, including a memorable TLC match at Unforgiven 2006.

Edge would then elevate to World Champion and for the rest of his career he would a main event mainstay, mostly on Smackdown where he would be at the top of the card with the company’s top babyfaces like Rey Mysterio, Batista and the Undertaker.  During that time Edge would become a “hybrid” in-ring worker.  His aerial work would drop as he’d get older but his mat work, striking ability and story telling would make matches that on the surface would be average and make them memorable.

Sadly, Edge’s injury in 2003 would come back and put a stop to a great career.  He would win the World Title for the last time at TLC 2010, and hold it through WrestleMania.  Then sadly he’d vacate the World Title and retire.  In 2012 Edge would be inducted into the WWE Hall of Fame by his best friend Christian.  Next to Triple H, Edge was my #1 guy to watch based on the fact that he never stuck himself in one type of match but instead would adapt to his opponent and tell a great story.  If you have either of Edge’s DVD’s that WWE produced, put them in and marvel at how a guy who came from middle class Toronto (but became a New Jersey Devils fan, figure that one out) became a WWE Hall of Famer.

Happy Birthday Edge, and yes we do think we know you.