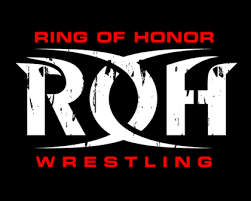 Ring of Honor has been around for damn near thirteen years and I am horribly ashamed I’ve only gotten into it recently. I’m going to keep watching their show and re-capping it as it’s something that every fan of professional wrestling should get behind. One of the best things about this show is you can watch it right here. I’m probably going to gush… be warned…

We get the usual intro filled with tons of action and I’m already pumped for the show. There’s an old lady sitting in the front row. See? Even the elderly love violence. Vince would kill for that demographic. I’m a little skeptical with Truth Martini filling in for Steve Corino on commentary, we’ll see if he completely tanks the show. (spoiler: he doesn’t) We get a run-down of the matchups tonight: ACH Vs. Alberto El Patron, Mark Briscoe Vs. Michael Elgin and Jay Lethal Vs. Roderick Strong. This should be great.

The first thing that’s incredibly obvious is that Alberto is having the time of his life wrestling for Ring Of Honor. It’s awesome to see, he clearly loves the atmosphere and the crowd. He’s one of those guys I always enjoyed in WWE but I felt they never just let him go all out. The other side of the ring is ACH who has been on an absolute tear in everything I’ve seen him in the last few months. All that hype aside I’m not sure these two clicked very well. The match was good but not great. Their timing felt just a little off. It may just be me but ACH looked a little lost and Alberto felt a bit slow. Perhaps ACH wasn’t used to being the heel out there as the Eddie Guerrero mocking felt a bit pushed. Whether he’s the heel or not ACH is so incredibly smooth in the ring and they pull off some fantastic spots together. Great to see Alberto kicking people in the face again. Great ending sequence where Alberto turns a 450 splash seamlessly into the cross arm-breaker for the tap out. Good match, but little below my expectation of what I thought they could do. I’d be totally remiss if I didn’t mention ACH getting kicked in the head and ending up with his head on Truth Martini’s lap. Who said there isn’t something for everyone?

Kevin Kelly takes us to a video package of ODB training at The Briscoe’s farm. It’s refreshing that he A) doesn’t sound like he’s shilling the training and B) there isn’t a five second shot after he announces it where the camera stays on him as he smiles/begs at the audience. The training package is fun. Think of a dirty Rocky IV montage. Come to think of it this was one Bill Conti track away from being a classic segment.

Showing competitors training for a match is totally a lost art form. Sure this wasn’t the purest form of that but it gives the impression these guys are athletes working to get better rather than entertainers (whatever that means) working on their best poses.

No fucking around here, right into match two. This is my kind of show.

I really want to like Michael Elgin. He’s great in the ring, he’s Canadian (albeit from Toronto…) I just wish he’d stop mugging into the camera so much. He’s got some great spots in this one, and he sells power spots unlike anyone I’ve ever seen. He makes his opponents look like they have to fight for every maneuver they do to him, which is something that , you know, makes sense in the context of a fight. I’ve never seen anyone turn a tornado DDT into a roll of the dice through sheer strength, and the way he catches Briscoe’s clothesline and turns it into one of his own makes my Canadian heart well up with Maple syrup. Mark Briscoe is game here too, he moves around the ring so well and his chops, which could easily come off like a second rate Steve Blackman, look legitimate and painful. They have solid match which ends when Mark Briscoe is killed with a power bomb from the top rope/pickup/buckle bomb/ Jay driller combo. I like the added touch of Elgin taunting his future opponent by using his finish to cripple his brother. A nice touch that’s never done anymore.

Post match Elgin fishhooks Mark with the hook/pin that held the turnbuckle, which is about as devastating looking a thing you can do. Period. Jay rushes out for the save and Elgin bails. A fan at ringside gets in Elgin’s face and boos him, which Elgin replies to by hugging him!!! Just great stuff. He then brushes off a legit Michael Elgin fan who wants a hug and my admiration for the man soars a little bit.

Elgin then jumps back in the ring and bludgeons Jay Briscoe with the title. We then get the pier six brawl (I’m very unclear what originally happened at pier six) where all four contenders rush out and beat each other up. (Was Pier six where Wyatt Earp was shot?)

Each guy gets his turn posing with the belt and the image of Jay Briscoe bleeding and fighting should be pinned to the wall at the WWE performance center. If more baby faces understood fire like he had we wouldn’t be ten years into the face of American wrestling being booed out of every building.

All that to be said, good on ROH for having focus and importance placed on their championship match. Everyone should want that title. Just so we’re clear ROH, as the four were brawling I saw the rose petals on the ground… I knew Romantic Touch had been there… Why are you hiding Romantic Touch from us????

Main Event time, with lots of time left in the show. I love it.

Jay Lethal’s music is amazing. Such a simple sound that gives me the impression that something important is about to happen. Both of these guys are amazing to watch. The “This is Wrestling” chant is built for this kind of match. They’re both fluid, yet stiff and you get the impression that the match is always one move away from ending. I’d be remiss if I didn’t mention Jimmy Jacobs on color. He does a fantastic job of putting both guys over and selling the intensity of the match. The pace of the match is phenomenal and just as they’re revving up for a finish BJ Whitmer (that bastard) attacks Strong and we get… a camera cut? There’s no explanation as to what happened, we just cut to Lethal at the entrance and Strong goading him to re-start the match. I guess it was a DQ? That’s a miss in editing or something from the production crew and made it confusing for the audience. Kind of a disservice to the guys busting ass trying to tell a story.

So the match is back, which I am thrilled with and we get a few minutes more of great wrestling. Kevin Kelly at one point breaks down a spot where both guys are on the top rope by saying ” If Roddy blocks the punch he’ll fall so he has to hold on and take the hits.” That’s the kind of analysis that is sorely missing from most broadcasts and legitimizes the “sport” way more than one would think. All good things must come to an end and after a sweet near fall off a “sick kick” Jay Lethal hits Strong with two stiff kicks of his own then crushes him with the Lethal Injection for the win. Great, great match.

Two slight issues I have with the match. Some of the knaps were a little loose. Meaning that you could clearly see them slapping their legs and kicking at the same time. I do have an appreciation of how hard those can be to hide, I just saw a few more than usual in the match. Nowhere near a Christopher Daniels in TNA amount, but a few too many. I love how the Lethal Injection looks, but I always laugh a little when the guy taking it has to stand there like he’s about to receive a fatality in Mortal Kombat. There’s been moments where the timing on it has been sublime and it’s looked great, this one was a bit off.

Strong and Whitmer brawl in the back. We get shots of bewildered wrestlers (hey! is that Dean Ambrose???) and I sincerely hope these gentlemen have more room to get dressed back there. We close on Lethal getting attacked by Patron and I’m impressed how we’ve managed to tightly pack a bunch of stories coherently into an hour.

– All the matches were good and would be the best match of the night on Raw, Smackdown or Impact.

-On top of being good, all the matches are given enough time to tell a good story. Wait, maybe that’s why they’re good.

– The way they promote Jay Lethal and the TV title is fantastic. He’s so legitimate that I’m getting as tired of writing the word legitimate as you are of reading it. I legitimately need a thesaurus.

– They continue to stress the importance of the title and the Championship match at the PPV.

– The PPV is very well built and this show made me excited to se it.

– Every time I watch ROH I see something I’ve never seen before.

– There’s no bullshit to this show.

– Truth Martini and Jimmy Jacobs were great on color. I didn’t even miss Corino… Well maybe a little.

– I promise I’m not going to talk about the commentary every week but I think it’s easy to forget that the commentators are the only characters we are with for the entire broadcast. If they suck, you’re going to tune out. Kevin and whoever he was with this week enhanced the product and made it credible. Without a word of a lie the commentating is the main reason I stopped watching most WWE.

– Like I mentioned above, the knaps are a bit obvious at times.

– Alberto doesn’t quite fit in yet. As soon as he adapts a little more to the style I think he’ll excel. I don’t think he’s there yet.

– I’m not sold on Truth Martini the manager. He looked better this week than he does when he wears the the flashy colors and his hair down. He strikes me as a combo of Jimmy Hart and a more serious type (Heenan, Dillon etc.) For me the combo doesn’t work. I wish he’d pick one. The crazy evil genius manager has never really caught on in a big-time way and after hearing him on commentary it’s clear he could be awesome if he was just more focused.

– The show missing the DQ finish before the re-start of the main event. That’s the kind of stuff that makes the promotion seem second rate. This promotion deserves better, it is not second rate.

Because it’s an hour with three excellent to good matches voiced in a professional manner that will take you back to when you loved wrestling. I’m sure I’ll get more critical the more I watch and become sensitized to this reality, but for now it’s easily the best wrestling show on TV each week and you can watch it for free on their website. No more excuses, support Ring of Honor.

Thanks for Reading! See You Next Week! Keep supporting Place to Be Nation. If you dug my stuff check out “The Seinfeld Re-Watch” and “The Great WrestleMania Re-Book“. If you hated my stuff and or me check out all the other great writers. They’re a great bunch!