A bold new era begins as Dr. Donald Garrick steps into the light as The Mighty Thor! Raised by a kind, but troubled man on the outskirts of Central City, Thor has finally accepted his lineage and made his choice to be Earth’s protector. But the mystery of Asgard’s destruction looms large as its killer has marked Earth for death next. And the Main Man, Lobo, never does a contract half-way. However, an unseen force has found a way to manipulate the powers of Thor’s hammer and the lightning is looking for new hosts, starting with Jay Garrick! Who is Granny Goodness and how has she gained power over Thor’s hammer?

Wally West is used to seeing lightning around Central City, ever since Thor showed up. But the Central City Police Department forensic scientist never thought he’d be hit by any! But this wasn’t just any lightning strike. Now, he’s gained the ability to run at nearly the speed of light… maybe faster! But as his powers open all-new doorways to him, he’ll discover that one of those is a door in time. What comes through will shake everything he believes to be true. As a young speedster claiming to be from the 25th century calls him “Uncle Wally,” another traveler intends to make sure Wally doesn’t live to find out why or how. Cable has come to the past with only one goal: No More Speedsters.

John Stewart hasn’t been a member of the intergalactic police force known as the Green Lantern Corps long. But he knows military structure and life thanks to his time as a US Marine. That’s why his assigned partner and senior officer, Sinestro, rubs him the wrong way. He doesn’t follow the rules unless it suits him and he’s far too aggressive in his methods. But that might be just what the Corps needs now that they’ve got some new competition. A new private police force has taken it upon themselves to handle cases before the GL’s can, but for a price. How much is justice worth and do you really get what you pay for? The Nova Corps is here to pick up the “slack” from the GLC. And Sinestro is starting to think they have a point…

Justice has a price. What are you willing to pay to get it for those you love? The Nova Corps may expect you to pay for it police service, but that’s a small price to make sure the criminals of the universe don’t sit around waiting for their chance to victimize someone else. Richard Rider learned all about the failures of the system on Earth and now he’s seeing it on a galactic level as the Green Lanterns seem content to lock up criminals and eventually let them out. And worse yet, they do it for free! This job is too much stress to take on for nothing. It’s time for a new breed of cop in the universe and Nova Prime, Granny Goodness, thinks the old ways are the best ways. 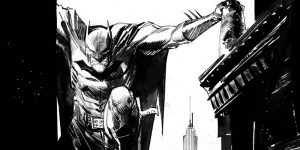 Bruce Wayne and Selina Kyle have thrown caution to the wind and made it official: they’re a married couple! But that doesn’t mean they’re retiring from the “night life.” The newlyweds barely have time to breathe as forces from the past begin to make themselves known. Batman’s greatest failure has set his sights on accomplishing what The Dark Knight never could: a crime free Gotham City, by any means necessary. But the former Robin, Jason Todd didn’t come back to Gotham alone. The Owlman and his deadliest assassin, Elektra, are here to make sure their new Red Talon succeeds. The rise of the Court of Owls has begun again. But when one of their assassination missions at a Wayne Tech bio-research facility goes awry, a young man on a school field trip will be gifted new abilities he never dreamed possible. Look out Gotham, you’re about to get caught in the web of The Spider-Man!

Historian Eddie Brock has made a career of uncovering secrets from the past. Now, he’s stumbled on one from post-Civil War America that could unlock a vast conspiracy still happening today. A powerful relic was recovered from the Louisiana swamps after it was stolen by a group of outlaws during the Civil War. Its origins unknown, but the stories say it could be a source of unlimited power. Prof. Charles Xavier has been working for years to unlock its full potential. But a dark presence lies within, trying to reach into his mind and corrupt him. Those who’ve touched the relic have all been consumed by it, including some who were targeted by the powerful organization who possess it. The entity within has reached out to Brock’s mind and has helped him orchestrate its escape. It needs to return to the bayou to find the other piece of itself: the first creature it truly bonded with and mutated into something so much more. But once there, Brock will find himself the one possessed and then hunted by the government’s most trusted secret ops team. That is, until the guardian of the glades steps in to once again comes to protect his home from these evil forces. Beware The Swamp Thing! 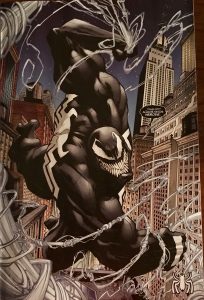 Miles Morales has spent the last few months training under Batman’s watch, but it’s time to break out on his own. You know, after school and all. But a new case has captured his attention and it all ties back to the accident that created him. A black ops mission to a Louisiana Bayou came back to Gotham with something…or someone… that may be partially responsible for Mile’s recent “changes.” But he’s not the only one interested in whatever a “symbiote” is…Red Talon is still carrying out his master’s mission and now he’s going to prove this “pretender” is no match for him. Then, he’ll take the symbiote for himself and then he’ll serve no master but himself. Whew, that’s a lot for Miles to handle… if homework and debate team practice doesn’t do him in, tangling with Talon and Prof. Xavier’s “personal security” War Machine, just might. But if War Machine has it in for Miles, his niece Riri sure seems to have other ideas. Is it possible she actually designed his armor? Is she serious when she says she wants to help destroy the symbiote?

Catwoman is going deep undercover in the Gotham crime families to uncover where Owlman came from and, more importantly, whose funding him. Elektra is out to make sure these secrets stay secret. Her organization has planned too long and invested too much money in the takeover of Gotham to allow some two-bit former cat burglar get in the way of that. This globe-trotting game of cat and mouse will take Selina from the bowls of Gotham’s underworld to the farthest reaches of the world. When her travels take her to Japan she’ll discover a secret that goes back further than The Court of Owls. Who or what is The Hand?

An impulsive speedster, a super-smart inventor and a mutated ninja turtle walk into a classroom… But not just any classroom. In this place, it’s Hawkman’s rules! The toughest of the tough is here to whip these three into shape. But don’t think this is all low-stakes fun and games, something big is on the horizon. A rift in space-time has begun flooding our world with new (and old) threats. Is this due to Impulse traveling from the future? Did one of RiRi’s bright ideas tear a hole in the universe? Can Raphael just please, for the love of god, get a decent slice of New York-style pizza? The answers to all this and more in this new monthly series!

The Brave and The Bold

Jack Knight never believed in magic. Despite the Cosmic Staff being in his family for generations, he always thought it was just science they didn’t understand yet. But suddenly, a hole in reality is opened and its origins are linked directly to his past. He has to explore this to its end, but he won’t be going alone. The God of Thunder believes this Cosmic Staff has origins in a very familiar place: Asgard! If it is indeed the staff of legend he learned about in the last surviving Asgardian texts, this could be the key to changing everything back to the way it should be. But the two heroes will face more than they ever bargained for as new realities reveal themselves in the rift. Including facing their mirror selves that will show them everything they ever feared possible.

“Heeeeeeyyyyyyy Rorschach!”
“Hrrm…”
“My nose is twitching… is yours?”
“Nose doesn’t move under mask.”
“C’mon, you gotta smell this mystery brewing!”
“Work alone. Leave by door or window. Your choice.”
“Awww, don’t be that way”
“Last chance”
“Buddy, this’ll be fun, the two of us working side-by-side… wait… what are you doing? No! At least open it first! AAAAHHHHHHHHHH!” *oof* “I’m OK!”
“Hrrm… didn’t die. Stretched from ledge to street. Face flattened. Street imprinted. Will try something else.”

Shadow of The Bat 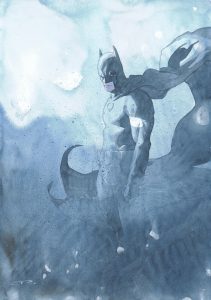 In these tales from The Dark Knight’s past, discover not only how the man became the Bat, but the origins of some of his deadliest foes. From the rooftops of Gotham to the depths of Nanda Parbat and beyond, this anthology series will give you the untold history of this universe’s Batman and how he came to be. In the opening story, go back to the night The Waynes were murdered in Crime Alley and see it through the eyes of someone who certainly doesn’t belong there. Cable knows something is beyond wrong with this universe and it all starts here. Could this all have been planned by someone or something that wants to create confusion and undo everything that ever mattered? Only one way to find out the truth!

Click through to the next page for pitches from the new kid on the PTBN block, Mitch Okun!