George Washington vs. Genghis Khan? Shakespeare writing beat poetry in Greenwich Village? Senior referee Earl Hebner selling shirts at Woodstock? What is going on with the space/time continuum?!
Oh. Hey. I’m Wade, but you probably know me as Deadpool. Mercenary. Mutant. Ruggedly handsome star of films and television. In this universe, I’m a blatant stand-in for a guy named Blue Beetle. My best pal, Booster Gold, is looking for his robotic sidekick, who is lost somewhere in time. He’s asked me to tag along and help him in the Search for Skeets. Hey, get your minds out of the gutter! As if our job wasn’t hard, throbbing and massive enough, these little blue guys called the Guardians assigned us a ring-wearing babysitter named Guy Gardner. Think of him as Archie Andrews with a bowl cut and a green promise ring. Anywho, we’ll be going on crazy time-hopping adventures, but don’t confuse us with any TV time travelers, because unlike them, we’re only doing this once every 30 days! 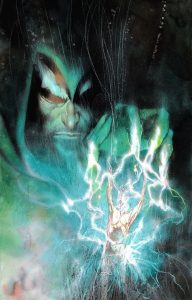 There are forces beyond the laws of science and nature. Some call them magic. Some call them religion. Recently, these forces have been in conflict thanks to one Texas preacher who just can’t keep his mouth shut. Imbued with a divine voice that commands others, Jesse Custer angered the Spectre, an entity that considers itself the manifestation of God’s wrath. Their spiritual conflict, however, has caused a ripple effect, opening the door to beings and realities beyond even their comprehension. Can the magical Zatanna, the mystical Doctor Fate and the mutant Nightcrawler (the son of the actual Devil!) forge an uneasy alliance between the two powerful foes long enough to keep the forces of chaos at bay? And what happens when the magical king of Kahndaq arrives demanding answers? It’s wizards, angels, demons and monsters against the unlikeliest team of heroes ever assembled!

SISTERHOOD OF THE BAT

With the Pantheon watching from above, who’s left to fight for the people suffering in the murk and grime of the urban jungle? In Gotham City, America’s grimiest urban jungle, three women from the wrong side of the tracks come together to fight back against the gangsters and metahumans terrorizing ordinary citizens. The dark knight known as Batgirl and hard-boiled detective Renee Montoya have been fighting an uphill battle against crime. When a newcomer, the Black Widow, arrives seeking to aid them in a mission of justice, who are they to say no? But Natasha Romanov may have an agenda all her own. 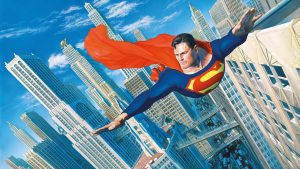 In a time when we all need a little hope, join the iconic artist Alex Ross and the legendary Superman creator Dan Jurgens as they bring Metropolis to life. In the cultural capital of the world, Superman balances the weight of public expectations with the responsibilities of a family. With a wife whose nose for the truth gets her in dangerous situations and a son whose curiosity is matched by his fearlessness, you will believe a man can cry. But you’ll also believe he, and we, shall endure.

Real news in the City of Tomorrow! That’s the motto of Perry White’s Daily Planet, the newspaper of note in America’s most populous city. His top reporter, Lois Lane, and his top photographer, Ben Reilly, tackle all the hottest stories and make it their mission to hold politicians’ feet to the fire. Follow the inner workings of a daily newspaper in the capes-and-tights world, as Lois and Ben turn their focus to the seemingly benevolent corporation backing the Pantheon.

Jesse Custer is a man of faith. A broken, shaky faith, but faith nonetheless. Suddenly, this small-town preacher is possessed by an entity that changes everything. Now he’s being chased by agents of both heaven and hell, and the only people he can trust are a morbidly obese millionaire and a self-righteous talking human-turtle hybrid! Bless him, Father, for he is about to sin.

From around the globe, Earth’s greatest champions are brought together by one man with a vision: to defend the planet against extraterrestrial and homegrown threats alike. Industrialist and inventor Lex Luthor uses his technology and expansive satellite system to bring together a who’s who of the superhero community. Together, they’ll face everything from a living planet with a giant Ego to an ancient and Apocalyptic mutant, but can even they survive the Doomsday scenario that lays in their future? And why isn’t Superman on the team?

When Ben Reilly showed up at Peter Parker’s door, Peter Parker didn’t know how to react. Here he was, seemingly an identical twin of Peter, claiming to have Peter’s memories from childhood and early adulthood. Six months later, the two now view themselves as the brothers they’ve never had. Finally, Peter has someone to share his burden as the amazing Spider-Man! With Peter patrolling New York during the day, Ben takes the nights and builds a life of his own. Their brotherly bond, however, may not survive the revelations to be revealed by the villainous Jackal!

Not everyone trusts the Pantheon. For some, mistrust is caused by paranoia. For Logan, it’s caused by knowledge. He has seen the future, and he knows that if this timeline has any hope, it’s in the hands of the heroes of the future. But if he thought fighting Sentinels and cutting through Red Skull’s army were tough, he’s in for a rude awakening when it comes to his new students: two egotistical boys, two badass girls and all the hormones one old man can handle. 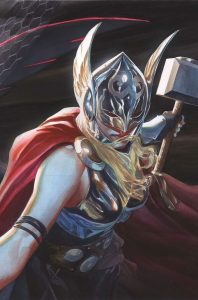 Enter the sprawling Norse mythological land of Asgard. Recovering from the latest Ragnarok cycle, the power of Thor has landed in the hands of human scientist Jane Foster. Transported from her lab to a world of Viking warriors and frost giants, Jane must quickly figure out where, what and why she is, because the evil Brainiac is coming to collect her newfound home!

They could be a friend to you. They could also be your deadliest foe. Brought together by a mysterious quadriplegic man with a southern accent and a decades-old vendetta, Red Arrow, the Black Widow and the Question just want to escape their checkered pasts and start over again. In order to do so, they’ll have to complete series of missions that defy every part of their moral codes. Will they rebel and risk losing everything, or will they compromise to achieve their dreams? Find out in the first issue of SULLY’S ANGELS.

T’Challa has ruled Wakanda in peace for years. The secluded African country recently joined the global stage as a member of the United Nations, sharing its centuries of wisdom and advanced technology. But like all seasons, peacetime is over. The rise of Kahndaq as a world power has shaken the African continent to its core, and its ruler, Black Adam, doesn’t share T’Challa’s welcoming view of the world. With tensions rising and countries around the world fighting for leverage, Black Panther must fight – politically and perhaps physically – for the sake of his country and hundreds of others. “War of Nations” begins!

As the Middle East bubbles on the precipice of war, Arthur Curry seeks to keep his underwater kingdom out of the public eye. Deposed King Orm has other ideas, and now that he’s partnered with Erik Kilmonger and Black Manta, Atlantis will rise! Arthur’s isolationist policies are about to backfire as Atlantis becomes both a threat and a target to the surface world!

Frank Castle doesn’t give a shit about politics, magic or religion. The only thing that matters to him is punishing the wicked. In this monthly title, follow Frank’s mission of justice as he metes out vengeance on the most wretched villains around the world, starting in the cesspool known as Bludhaven.

Inventor. Industrialist. Politician. Billionaire. Founder of the Pantheon. Nobody’s perfect, but it sure seems like Lex Luthor is close. However, those with the most power often have the most secrets. In this series, viewers will enter Lex’s world, simultaneously following his modern-day exploits and slowly learning more about his past. From a mansion in Smallville to the high-rises of Metropolis, discover the secrets that have shaped Lex into the world’s greatest champion … or its most sinister villain.

Click through to the next page for pitches from the manager himself, Todd Weber!