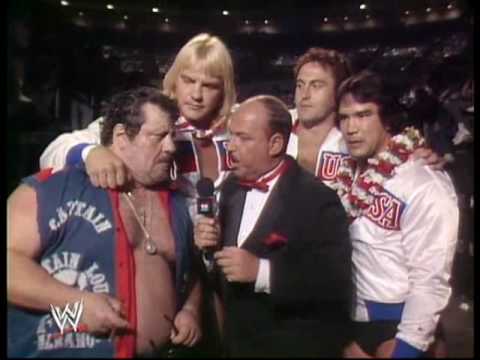 Your hosts are Jesse Ventura and Vince McMahon.

Vince welcomes the crowd, which is absolutely jacked, and runs down the show. Both Mr. T and Cyndi Lauper will be here. Also, two championship matches will take place as Wendi Richter defends her Women’s Championship against the Fabulous Moolah and Hulk Hogan defends his World Heavyweight Championship against Bob Orton.

Windham works over Sheik to the delight of the crowd. The faces then all take turns working on the arm until Rotundo grabs a front facelock. The match breaks down then the faces clear the ring of the heels. Back from break, Steamboat is working the arm of the Sheik. He hits a powerslam then a missile dropkick. Flying body press gets two after Volkoff breaks up the pin. The faces take turns beating on Volkoff for a bit. Rotundo gets a few nearfalls until the Animal tags into the match. He runs around then looks for a tag but his partners bail and that allows Windham to rolll him up from behind for the win (6:29) **1/4. After the match, Sheik and Volkoff return to beat on the Animal. Albano comes into the ring and consoles his former client.

Thoughts: Good action and it was weird to see the faces completely dominate the match. Also, the first ever segment on SNME had George Steele turn to the lovable babyface he portrayed until he retired.

Piper’s Pit with guest Paul Orndorff. The segment starts with Orndorff ordering Orton to the corner, quoting Eastwood’s “make my day” line. Piper flips out about this then Orndorff finally sits down and calls out Piper for abandoning him after their match at WrestleMania. Piper accuses Orndorff of losing his guts then says that he has drinking “too much of his own bathwater.” Piper flat out calls him a piece of garbage and calls Orndorff an embarrassment to him, Orton, and his family. Piper tries to cheapshot Orndorff but he blocks it and goes after Piper and Orton. He has Piper up for the piledriver but Orton attacks him from behind. They beat on him until Mr. T runs out for the save. Good stuff.

Okerlund is with Hulk Hogan. He asks him about what just happened on “Piper’s Pit.” Hogan says that Orndorff felt what it was like to have people behind him and says that he now has a change of heart and wishes him the best.

Mr. T and Hogan rip off each other’s shirts in an attempt to showcase wrestling’s homoeroticism to a national audience. Orton tries to attack from behind but Hogan catches him. He chases him around then gets a backdrop and a few slams. Orton bails then Hogan works the arm when he reenters the ring. Orton comes back with a knee smash then hammers away for a few minutes until Hogan hulks up. He hits a clothesline then drops an elbow for two. He works on him in the coner but Orton breaks that up with an inverted atomic drop. He sets him up for the superplex as the crowd is in awe but Hogan knocks him off the top and hits an elbow smash. Hogan then drops the leg but Piper cheapshots him and the ref rings the bell for the DQ (6:54) *3/4. After the match, Mr. T runs out but he gets duble-teamed in the corner. Orndorff runs out to back the faces, officially cementing his turn.

Thoughts: Not much of a match but decent enough. Lots of stalling and a good amount of attention was paid to the guys on the outside. We now have our main event matches set up for the next few months.

We are shown a music video from Cyndi Lauper’s song “Good Enough” from the “Goonies” sound track. The song was awful. Afterwards, Albano and Lauper call it the greatest song ever until Piper runs out and rants at Lauper, stating that Sreven Spielberg asked him to be in the video and she had him cut his part.

Before the match, Howard Finkel reads a note that orders Lauper to leave the floor and head back to the dressing room. Moolah kicks Richter out of the ring then stalls for a minute, allowing Richter to dropkick her out to the floor. Moolah gets roughed up for a minute then the girls slug it out in the ring. She pulls her off the ropes a few times but gets chopped and Moolah uses some cheap heel stuff until Richter hits her with a small package for the win (3:14) 1/4*. Lauper runs out with Dave Wolfe to congratulate with Richter.

Thoughts: The match was a lot of stalling but it most likely would have been a lot worse had it gone longer than several minutes.

Okerlund is with the Junkyard Dog and his mother. JYD says he took his mother to New York for Mother’s Day. That was it for this interview.

JYD headbutts Dougherty then hits a clothesline. Dougherty starts screaming outside then JYD yanks him up by the hair. In the ring, JYD no-sells a few punches then uses his crawling headbutts. He slams Dougherty off the top rope then uses some more headbutts then hits the powerslam for the win (3:15) 1/4*. After the match, JYD and his mother dance in the ring to the delight of Vince.

Thoughts: A long, dull squash match. I am pretty sure that Vince wanted to highlight JYD’s act on a national stage as he was always way into his dancing segments.

Okerlund is backstage with everyone at Lauper’s Mother’s Day party. Typical wackiness from the 80s WWF including a drunk, ranitng Albano and Blassie lying to Okerlund about the hot young girl in a bikini being his mother. Moolah comes out, upset that she is not invited and ends up getting tossed into the giant cake that was on the table.

Final Thoughts: The wrestling wasn’t much but they ran two hot angles and the production values were much better than their other shows so it turned out okay. Two free title matches on TV was a huge deal back then as well. Definitely worth a watch for historical purposes.