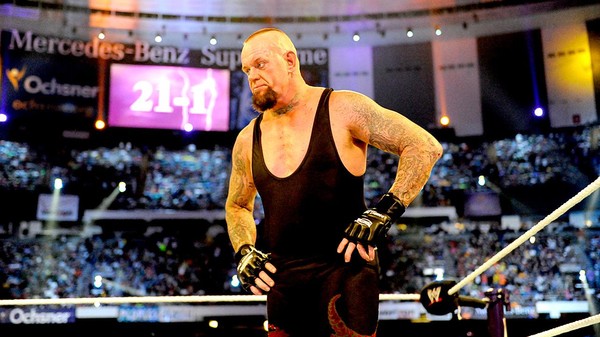 It was one year ago that the unthinkable happened when the Undertaker’s unblemished WrestleMania record was shattered by a third Brock Lesnar F5. After years of false rumors that the streak would end, most fans had given up on the notion and assumed Taker would retire with his perfect record in tact. That confidence grew when Lesnar was announced as his opponent for New Orleans because he was the exact opposite of the wrestler most fans assumed would be the one to pin the Deadman’s shoulders to the Mania mat. He was a part-time mercenary, a guy that was already legit enough to not need the win and somebody that was not seen as deserving of such an honor. As expected, the match was pedestrian at best as Taker was clearly worn out and not moving well and Lesnar was doing his best not to cripple him. Factor in that the entire audience assumed the ending was never in doubt, it was not one of Taker’s best Mania outings and as the match wound down it looked like he was finally cooked. Until that F5. And that three count. And the shocked fans. And the boos. It was over, the cat was out of the bag, the streak was gone and could never be brought back. And suddenly a new set of questions arose.

We can debate all day whether it was the right decision and whether or not they took proper advantage of the scenario through the rest of 2014, but the fact of the matter is that it happened and we can’t change that. After the loss, there were two camps of fans that splintered regarding the future of the Deadman. A sect thought this should be it for him. He went out on his back, the streak was over and the poor guy looked like he could barely move. Let him rest…peacefully. Would he even be a draw anymore without the allure of the streak? He doesn’t seem like the type of person or character that would require a final victory and a chance to ride off in the sunset. Honestly, he has already had a dozen of those moments. The other camp of fans wanted to see him get that one last victory and go out like the legend he is. Perhaps the oft-rumored match with Sting could go down? Or maybe something with Kane where both would fittingly retire together afterwards? Now that the streak was over, they could even hide him in a tag match to get him onto the card. I see the valid points of both sides, but I am firmly entrenched with the former group. I really believed Taker had nothing left to prove and nothing left to give. I saw very few positives that could come from another trip down the long Mania aisle. Who on the roster would have that mix of believability to compete with Taker as well as the skills to pull him to a match worthy of his name and be in position to suffer a loss to the aging Deadman? Daniel Bryan? No way they would let him win and he doesn’t need another frustrating loss. John Cena? That window is closed and wouldn’t serve much of a purpose. Triple H? Been there, done that. Sting? Would be a trainwreck in more ways than one. Kane? Sigh.

By the time the calendar turned to 2015, it was heavily rumored that Taker would indeed put on the trunks yet again. Despite fan pictures that showed him to be in tough shape, he had been working out and felt he could give it a go. He was held out of the Hall of Fame ceremony as was originally rumored and shuffled into the card instead. Around the same time, Bray Wyatt began to be rebuilt, picking up strong wins on TV and PPV and given a solid run in the messy Royal Rumble. It was refreshing to see the company get behind someone and actually book them like a winner instead of 50/50 participation trophy recipient that we have gotten so used to over the last decade. And it was tremendous that they were doing it with a wrestler that was young, hard working and deserved it. Wyatt had went out of the box to build his new gimmick and improve in the ring, never settling and always moving forward. On a whole, 2014 was not a great year for him as he was soundly defeated by John Cena in a major booking gaffe in New Orleans and never truly recovered. He picked up pedantic, hollow victories over Cena in the months that followed but they had missed their chance to give him the marquee win he needed. By the end of the year, his family members had been stripped away and he was battling Dean Ambrose in a feud that felt more like a cartoon than the psychotic thriller many hoped it would be. But he won the feud and has been on a hot streak since. With his confidence brimming, he started subtly hinting at challenging Taker to a Mania match in late January. The subtleties vanished and Wyatt became unabashed in his wishes, especially at Fastlane when he was wheeled out in a casket and demanded the Deadman return to battle him. The match was made and the second guessing began almost immediately.

Which brings us to this Sunday’s WrestleMania. Is all of this strong booking just a play to make Bray look good enough to earn a loss in a major match with Taker? If so, what a waste. And it is depressing, because it shows they know how to properly build up a strong heel contender in short order (Rusev has also been handled very well, so it isn’t a fluke, they can do it when they want to). It is frustrating because they need stars badly and Wyatt can be that level of homegrown star if they wanted him to be. And despite the bullshit they will pump out about “valiant efforts” and “there is no shame in losing to the Deadman at Mania”, a loss here would really be baffling. If they were so hellbent on getting Undertaker a final WrestleMania victory, there were a dozen other wrestlers that could have easily been sacrificed to put him over one last time. Using one of your young, over heels to feed to a semi-retired Undertaker is absurdly counter-productive even for a company that specializes in counter-productivity.

If Undertaker’s legacy is on the line in any way (it’s not) then feed him somebody else. In fact, I would argue that Taker defeating Wyatt on Sunday could hurt the Deadman’s legacy more than it helps it. For a long time, Taker was looked at as selfish and protective, someone that wouldn’t lay down or put over and establish young talent. It took him more than a few years to shed that label, improve as a worker and settle into that aging veteran role where he would pick up his wins but also help build the next group of talent. Here is his ultimate chance to give a young guy the rub at a time when a win over him still means something. Sure, it would mean more if Taker hadn’t already notched that loss, but that was Brock Lesnar. After watching Lesnar destroy anyone in his path afterwards, you can explain that loss away. If Wyatt were to give Taker another check mark in the right hand column, he would put himself in rarefied air and would be looked at as a true future star, somebody that the company is truly behind. It at least gives him a better chance going forward. A loss puts him right back in the middle of the pack, stuck in neutral, hoping to regain momentum in April yet again. Undertaker can easily afford a loss here, and it even sets him up for one last match next year where he has to come back to prove the magic isn’t gone. Then he can beat another veteran and officially call it a day. But that win doesn’t need to come Sunday. WWE has done a lot of damage to their young stars over the last twelve months. Bray Wyatt defeating the Undertaker on Sunday can go a long way to repairing it.