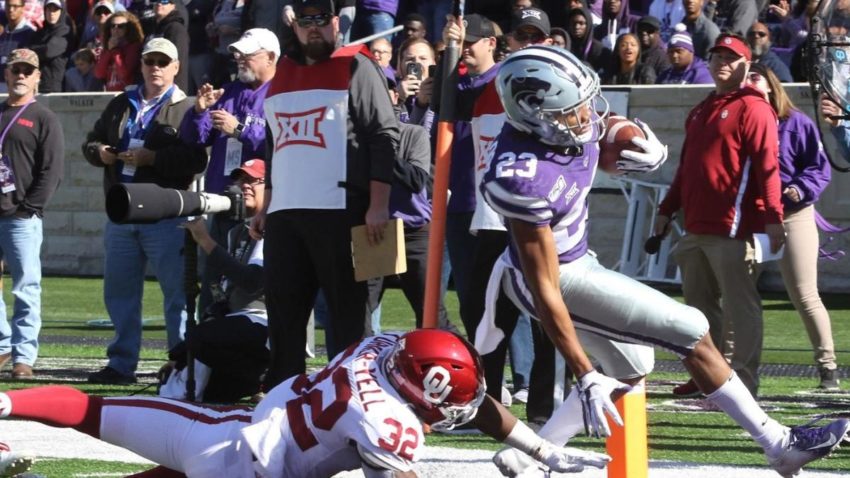 Hello college football fans! This coming weekend is the last slate of games to be played before the first CFP rankings come out next Tuesday. Bama? Geaux Tigers? Boomer Sooner? THE Ohio State University? Let’s deep dive into this past weekend’s action and see who’s in…and who’s out!

Big Upset in the Little Apple: On Saturday when it came to the game between Oklahoma and Kansas State, everyone was saying that the Wildcats would likely hang with the Sooners but the talent would take over in the end. While the game was close at the half, the Wildcats were able to bust the game wide open in the 3rd quarter and early 4th by building a 25 point lead. This proved to be just too much for Jalen Hurts and the Sooners to overcome, though they came close. This is a devastating loss for the Sooners as they will need to win and out and likely need quite a bit of help to reach the playoffs.

LSU Escapes Ahead of Huge Showdown: While it could’ve been easy for LSU to look ahead to their huge clash with Alabama on November, you can do that any week in the SEC. LSU welcomed in their fellow Tigers from Auburn to Death Valley. This ended up being an incredible defensive battle, as both offenses struggled mightily to get much going most of the day. Bo Nix, who hasn’t played a particularly bad game so far despite being a freshman, finally had a not so good game. Joe Burrow, while not playing up to the level he’s been at all season, made the plays when LSU needed him the most. LSU were moved into the top spot on the poll and set a 1 vs 2 matchup against Alabama, in what could be the game of the year.

Minnesota Rolls Before First Real Test: Maybe the most overlooked undefeated team left in the country is the Minnesota Golden Gophers. Since entering Big 10 play, they haven’t necessarily played the top level teams so far but they have dominated those they have played on both sides of the ball. This week they were able to take care of Maryland by the score of 52-10. Next week they will welcome Nittany Lions of Penn State, in what will be a huge prove it game for the Gophers. Win that game (or at least keep it close) and you will be considered amongst the contenders in the Big Ten, but lose this game and you may just prove that feasted off of weak competition.

Mack Brown Takes All Time Wins Record: Before Mack Brown returned to coach this season with the North Carolina Tar Heels, he would’ve been considered amongst the greatest coaches of all time. Well now he has another accolade to add to his already impressive resume, as on Saturday he became North Carolina’s all time winningest coach. He achieved most of these wins in his previous stint with Tar Heels. No one expected the Heels to be much of anything this season, as it would likely take Brown a couple of years to get them to ACC contending levels. While 4-4 overall may not look too impressive, they are are currently tied at the top of the Coastal Division with next week’s opponent Virginia. Win that game and they’ll be in the driver’s seat to play in the ACC championship game.

Alabama Asserts Dominance Before Big Clash: Alabama welcomed the Arkansas Razorbacks to Tuscaloosa on Saturday. While the Razorbacks were never going to hang with the Tide, this game was more interesting to see how the Tide would fair without starting QB. The Tide needed to lean on the running game and the defense to help along backup QB Mac Jones, just to make things easier for him. Well they were able to establish both of those things early and often, while Jones didn’t struggle at all to the tune of 3 TDs. Like I said above with LSU, it’s important to build as much momentum as possible going into a titanic clash such as their game on November 9th. Hopefully for the Tide, Tua will be back and ready to go when the Tigers come to Tuscaloosa for the game of the year.

Embarrassment in Ann Arbor: What the hell happened? Notre Dame has played so well the past three years with some big wins and big moments. However, Saturday’s 45-14 loss in rainy Ann Arbor against Michigan was head scratching. Michigan got its big win that Jim Harbaugh needed but more importantly, what the fuck ND? I mean I know it was raining and all but it felt like nobody wanted to be there. Ian Book was throwing like he never picked a football up and the defense was literally on its heels all night. IT WAS JUST RAIN. ND has so much more talent that Michigan, it’s just mind boggling. Well, their playoff chances are gone. Now perhaps they can make a Big 6 bowl if BK better prepares them than he did Saturday. That was torturous to watch. Notre Dame is home this week to Virginia Tech, while the Wolverines are at Maryland. Oh, and Urban Meyer IS NOT coaching at Notre Dame. Too much baggage.

Buckeyes win big: Wisconsin was clipped at Illinois last week, but perhaps they would rebound and give Ohio State a game at the Horseshoe. Well…they didn’t. JK Dobbins rushed for 163 yards and 2 TD and played turnover free ball in a 38-7 rout. They, like the next team I’ll talk about…feel disrespected because they don’t play in the precious SEC. Well all eyes from Columbus to Clemson will be watching in a couple of weeks to see if the committee will bump the LSU/Alabama loser out of the Top 4. The Buckeyes will play angry, just like…

Clemson keeps winning angry: Sure Trevor Lawrence may not be having the best season statistically that he had a year ago. But, the committee should be looking at wins and losses, not how many interceptions the QB has. Lawrence threw 3 TD, Travis Etienne had another 3 TD as Clemson destroyed Boston College 59-7. The defending National Champions are tired of being bullied by pollsters and sportswriters, they should still be #1. So Dabo & the Tigers are going to continue mercilessly pummeling teams until the champs get the respect they deserve. They’ll also be looking forward to LSU/Alabama. According to this humble correspondent…Clemson can beat both of them. Boy do I feel bad for Wofford this week. Take the check guys…just take the check.

Oregon wins a shootout: Heisman hopeful Justin Herbert had a pedestrian game for the Oregon Ducks (21-30, 222 yards) and Oregon was locked in a 17-17 fight with Washington State at the half. A fun second half ensued, which ended with Camden Lewis’ 26 yard FG with a minute to play and a 37-35 Ducks victory. Herbert really didn’t have to do much as CJ Verdell rushed for 257 yards and 3 TD. At 7-1 Oregon is the class of the Pac-12 as they head to the Coliseum this week to play USC.

Academies Update: Army dropped their fourth straight game to fall to 3-5, losing 34-29 to San Jose State. Air Force is 6-2 after a 31-7 home win over Utah State. They play each other this week in Colorado Springs. If Army wins, the Army/Navy game will decide the CIC trophy since Air Force already lost to Navy. Speaking of the Middies, they won a fun 41-38 back and forth battle with Tulane on a last second FG by Bijon Nichols. They’re now 6-1 and this week will face UConn in a Friday night tussle at Renschler.

The first World Title match of the year is next weekend with LSU/Alabama, but there are still some great battles this weekend on the eve of the first CFP rankings. Here’s your viewing schedule!

All games EST on Saturday unless noted: