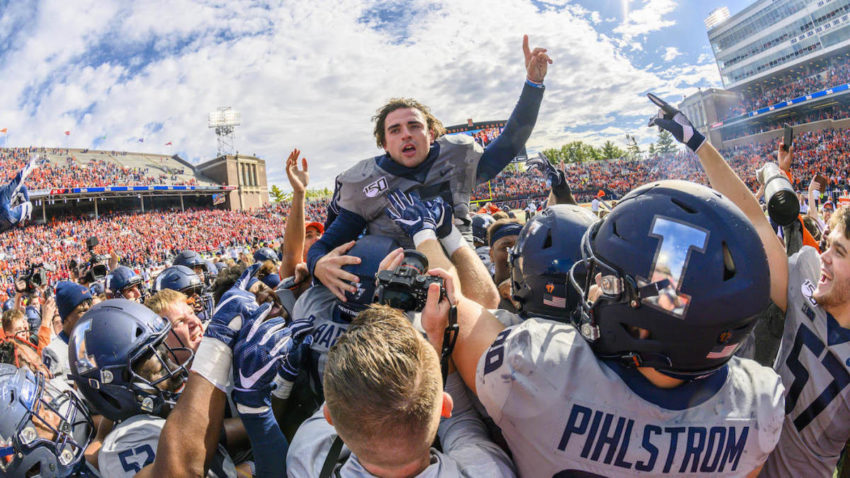 Welcome back college football fans! Scott & Logan are here with your hottest of hot takes! We are inside two weeks away from the first official CFP rankings. Things are still topsy-turvy as one undefeated bit the dust Saturday, while others keep cruising. But one undefeated team that isn’t happy is the defending National Champions. Clemson is ranked SIXTH???? Let’s hop in shall we?

Is Clemson getting screwed?: We won’t get into Clemson’s 45-10 win over Louisville to stay unbeaten, as it was a typical Clemson beatdown. Travis Etienne had 192 yards on the ground and Trevor Lawrence had 3 TD passes. Here’s the issue. They slid FURTHER down the poll to sixth. SIXTH???? I mean, they’re the defending national champions and they’re undefeated. What’s the problem? Oh wait, the pollsters are punishing them because 1) The ACC is hot trash as a conference, and 2) North Carolina made them sweat in a 1 point win. I guess the five teams above them haven’t had a “sweat” game yet. As for the conference, well Virginia has been ranked, and Wake Forest has had a great season so far. Sure the lower part of the conference is awful (Particularly Miami, more on them from Logan later) but that’s not the Tigers’ fault. It’s bad enough Dabo Swinney had a chip on his shoulder last season and they crushed everybody to win the title. Are they going to have to do that again? Well as usual, the SEC has all the world talking, but at least one of the current undefeateds there won’t be, and others could fall. Just give it time, and Clemson will be in the Top 4 in two weeks.

Illinois shocks the world: One team that is no longer in the unbeaten talk is Wisconsin, who once again flopped at the wrong time. Illinois hadn’t beaten a ranked team at home in 12 years, but a last second James McCourt field goal gave the Fighting Illini a 24-23 win and the champagne was flowing in…Champaign. Ha, I’ve been waiting to use that line forever. The Badgers had a 23-14 lead with about 9 minutes left in the game and seemed to have things in hand.  But Lovie Smith didn’t panic, and the defense held tough to give the offense a chance to come back and win. Probably the biggest win for Smith since the 2006 NFC Championship for the Bears. Oh, and that ranked win for Illinois at home in 2007? Yep, Wisconsin 31-26. The Badgers head to Columbus this week, in a game that has definitely lost some luster.

Wolverines lose on the big stage..again: Jim Harbaugh has coached Michigan against a Top 10 team 11 times. Their record? 1-10 after Saturday’s 28-21 loss in Happy Valley to Penn State. The undefeated Nittany Lions saw Sean Clifford throw for 3 TD and rush for another as Michigan’s secondary got beat multiple times late in the game. Is Penn State for real? Not sure, but they are also ranked higher than Clemson. As for Michigan, they host ND in prime time. Penn State does have three of their last five on the road, all tough games including Minnesota and Ohio State.

Pac-12 Update: So there’s three teams ranked in the Pac-12 Conference: Oregon, Arizona State and Utah. Two of them have 1 loss (Arizona State has 2) but the continued cannibalizing will cost them a playoff spot yet again. Oregon came from behind on the road to beat Washington 35-31, while Utah actually handed the Sun Devils that second loss 21-3. Oregon wants that Rose Bowl slot, and they’ll keep fighting for it this week at home against Washington State. An Oregon-Utah conference title game is in the offing if both keep winning, as Utah will be home to California.

Academies Update: Army is under .500, dropping their third straight 28-21 at Georgia State to fall to 3-4 on the year. They’ll try to get back to .500 this week at home against San Jose State. Navy had a bye and is 5-1 heading to a home date Saturday with Tulane. Air Force is 5-2 after blowing out Hawai’i 56-26 and is home to Utah State this week.

LSU Rolls Ahead of Tough Upcoming Schedule: Joe Burrow and the Tigers rolled into Starkville this week to play the struggling Miss. State Bulldogs. Through about the first quarter and a half it appeared as if the Bulldogs were going to hang with the Tigers and make this a game. A touchdown before halftime, that made it 22-7, though began the blowout that would ensue. Burrow and the Tigers would end up winning 36-13, but pretty much dominated the second half on both sides of the ball. Now for the Tigers,  they will welcome in Auburn on Saturday. They will be off the week after that and then will travel to Tuscaloosa for the game that very well could decide the SEC West if not the SEC as a whole.

Miami Hits Rock Bottom: Miami was a sexy pick by the experts to win the ACC Coastal this year and maybe give Clemson a run for their money in the ACC title game. While coming out of the gate 2-3 wasn’t exactly what the Hurricanes were expecting, it seemed like they maybe had gotten things back on track in their upset win Virginia the previous week. This week they welcomed in lowly Georgia Tech, which would’ve been thought to be a good way to keep that momentum going. Anything that could go wrong for the Hurricanes did go wrong in this game. They had a fumble that was recovered in the end zone on them, another score on a fake punt, and got a field goal blocked as time expired. The field goal getting blocked sent it to overtime, at least giving them a shot to salvage a win, but Tech scored on the first play in overtime and were able to turn the Canes over on downs.

Texas Escapes Upset: When you think of classic games between Texas and Kansas, it is usually in relation to a match up on the hardwood. Well on Saturday they were able to provide us with a classic on the gridiron. While the game was close the whole way, things didn’t get crazy until the fourth quarter. The fourth quarter saw 6 touchdowns scored between the two teams, a blocked PAT ran back for two points, and a game winning field goal as time expired for Texas. While the Jayhawks may not have won this, they certainly played a terrific game offensively and though Les Miles may not have them where they want to be yet I think I like the direction they are headed.

Boise State’s Perfect Season Ended: Ever since arriving on the scene in 2006 with their major upset of Oklahoma in the Fiesta Bowl, the Boise State Broncos have always seemed to be one of the best non power conference teams in the country. On Saturday they were riding a 6-0 record as they traveled to Provo to play the reeling BYU Cougars. Both teams came into this game without their starting QBs. Baylor Romney, the QB for BYU, did a better job of stepping up the plate in the starters absence as he led his team to a 28-25 upset victory over the Broncos. This game was never as close as the final score indicates as BYU dominated the first 3 quarters, and while the Broncos tried to mount a comeback it ended up being too little too late.

Alabama Wins Despite Tua’s Injury: Alabama has been plagued with injuries all year on defense, as they are down some key players. The injury bug reared its ugly head again on Saturday in the Tide’s “rivalry” game against Tennessee, when Tua Tagovailoa went down with an apparent ankle injury in the second quarter. Luckily for the Tide their defense and RB Najee Harris came to play in the game and were able to lead the Tide to a fairly easy 35-13 victory.

The bigger concern for the Tide is how long this injury will have Tua out and how much it will affect him even when he comes back. Injuries hampered him towards the end of last season and his play slacked when it mattered most in the National Title game. Hopefully for him and the Tide, this injury won’t linger and affect him too badly as they headed into the meat of their schedule.

Games are bigger and bigger with the first CFP rankings coming out November 5. Here’s this coming weekend’s biggest games.