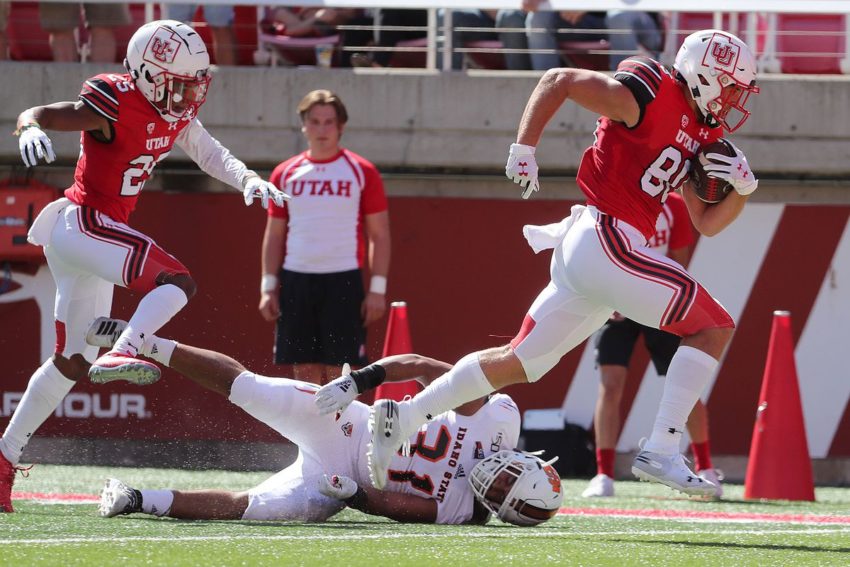 The college football season is a few weeks old, and we’ve seen a ton of blowouts and a ton of points scored. Starting this coming week, we may finally start seeing some top matchups and defenses may start to show up.

As always, Scott & Logan have your recaps and look ahead to what is upon us this weekend.

Kansas State Runs All Over Starkville: Mississippi State fans coming into this week knew they were going to get all the could handle from the Wildcats. The Wildcats boast an impressive running attack and the Bulldogs hadn’t shown a great ability to stop the run. Needless to say, neither of those things changed on Saturday. Now while you may look at the stats and think that 146 yards rushing isn’t a ton of yards but trust me as a person that took this game in live, it seemed like any time they needed a big run or a first down they were able to accomplish it. While the Bulldogs were able to get a lead late in the game, a kickoff return TD by the Wildcats all but sunk any chance of a victory for the Bulldogs as it completely swung the momentum of the game back in the direction of the Wildcats. Kansas State was able to run out of Starkville with a 31-24 victory. The Bulldogs now have a lot of questions to answer as they welcome Wildcats of another kind, in the form of Kentucky next week in a crucial SEC matchup.

Florida Escapes Against Kentucky: Speaking of Kentucky, they welcomed in the Florida Gators this week for the SEC opener for both teams. Kentucky was able to do something against the Gators last year that they hadn’t done in 31 years and that is defeat the Gators. The Wildcats were looking to make it 2 in a row and this time doing it in front of their home crowd. Kentucky
was able to outplay the Gators through the first 3 quarters, holding a 21-10 lead heading into the 4th. Florida QB Feleipe Franks would go down late in the 3rd quarter with what looked to be a terrible leg injury. Enter Kyle Trask. Once Trask entered the game, the Gators were able to take over scoring 3 4th quarter touchdowns and coming away with 29-21 victory. While losing Franks is a big loss for the Gators, the way Trask played in this game has got to give you a good feeling and hope that the Gators can stay the course of a special season.

BYU Score Second Upset of Season: BYU coming off an overtime victory against Tennessee, welcomed the USC Trojans to Provo this week. USC was also coming off a victory against Stanford, which vaulted them into the top 25. This game was an incredible back and forth duel where neither team seemed to show any signs of letting the other come away with the victory.
The game would eventually go to overtime, making this the second consecutive OT game for the Cougars. The Cougars would open the OT period by making a 43 yard field goal, meaning if the Trojans could muster a touchdown it would escape with a victory. It was not meant to be though as BYU was able to intercept a pass and ice the game, scoring a huge upset victory. The Cougars welcome in Washington to Provo next week hoping to score a 3rd victory over a Power 5 programs and a 2nd consecutive victory over a PAC 12 team.

Kansas Ends Long Streak: Kansas has long being mired by mediocrity, achieving very little success in recent history or as a program in general. Les Miles was hired to be the head man in Lawrence, with the hope that maybe he could bring the success he was able to have at LSU to the Jayhawks. After last week’s loss to Coastal Carolina it seemed like things were going to pretty much stay the same. This week the Jayhawks would go on the road to play Boston College. Entering this road game, they had not won on the road against a Power 5 program in 48 straight tries. That streak spread over nearly 11 years. After Boston College jumped out 17-7 lead heading into the second quarter, it looked as if the streak was on its way to continuing. The Jayhawks though would go on to outscore the Eagles 41-7 the rest of the way to grab the 48-24 victory and end their historic skid. I won’t go as far to say that Miles has them turned around but if he and the team can build from this victory they can at least be competitive in what is a tough Big 12 this season.

Maryland Falters After Big Victory: One of my takes last week had to do with the Maryland Terrapins and them finding consistency after scoring huge early season victories. The previous two seasons they had beaten Texas in the first game, only to end both respective seasons with a losing record. After last week’s upset victory over Syracuse though, the Terrapins were hoping to keep momentum going against Temple. Temple, who actually defeated Maryland last season, always plays incredibly well on defense and were hoping that they could stop the buzzsaw that had been Maryland’s offense through the first two games. Defense did end up being the deciding factor in the game, which ultimately favored the Owls. They were able to stop the Terrapins on the goal line to end the game and come away with the 20-17 victory, thus putting Maryland at 2-1 for the 3rd straight season heading into conference play. I think this Maryland team has a little bit more juice than the previous teams had, but with a difficult Big Ten schedule ahead of them they need to right the ship quickly if they want to avoid the late season collapses that have plagued them recently.

A warm-up for Athens: Yes, I know you shouldn’t take much into Notre Dame’s 66-14 win over New Mexico in the home opener Saturday. Ian Book threw 4 TD and the defense looked awesome. But…it’s New Mexico. Looks nice on paper, but it’s not Georgia. This coming Saturday, between the Hedges in prime time…the Irish face their first real test. Probably the biggest non-conference game in Sanford Stadium since Herschel’s days.

Orange demon exorcised: As awesome as the defending champion Clemson Tigers have looked in recent years, one team that always gave them fits was Syracuse. The Orange beat Clemson two years ago on a Friday night at the Dome and last year made things uncomfortable in Death Valley. Back at the Dome Saturday, the Tigers said “Enough of this shit.” Trevor Lawrence shook off a couple picks to throw 3 TD and rush for another in a 41-6 Clemson win. Clemson hops out of conference this Saturday for what seems like a scrimmage against Charlotte.

Utes in the Top 10: It’s been a few years since Utah has gotten some national press, but they’re now #10 in the country after Saturday’s 31-0 win over Idaho State. Tyler Huntley had 282 yards and 3 TD and Zach Moss had 106 on the ground with a score. Utah is 3-0 and poised to make waves in the Pac-12. That starts Saturday with their first conference game at wounded USC.

Academies Update: Army rebounded from that gut-punching loss to Michigan with a 31-13 win over Texas-San Antonio to move to 2-1. Navy looked strong in a 42-10 win over East Carolina to move to 2-0. Air Force is also 2-0 after an exciting 30-23 OT win in Boulder against Colorado. This week Army is home to Morgan State, Navy has a bye and Air Force has another huge road game at #20 Boise State on the Smurf Turf.

After a week of unexciting matchups around the country, we definitely get some fun Top 25 wars, culminating with a battle in Athens. Here’s the schedule: