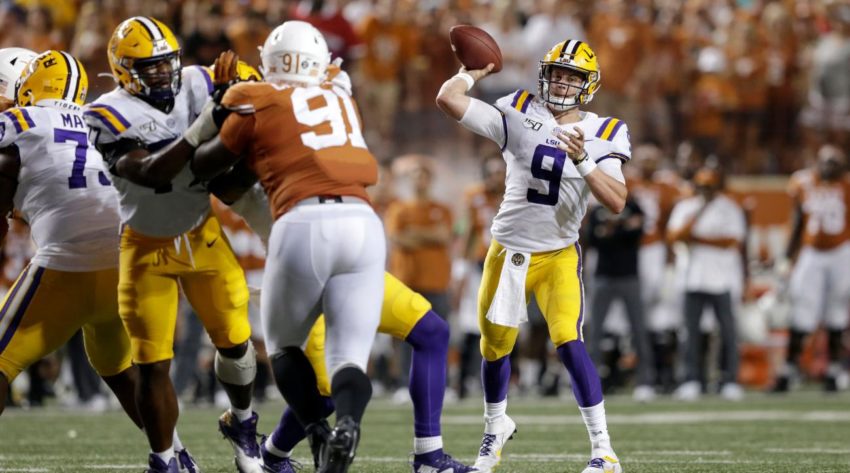 Welcome back to the Campus Hot Takes! The second big week of the 2019 season is behind us, and Clemson is still #1 but things will continue to simmer as the conference schedule kicks into high gear this coming weekend. Scott Criscuolo and Logan Crosland will take you back in time and give you the recap!

The Champs advance: Trevor Lawrence threw a touchdown pass and ran for a score and the top-ranked Clemson Tigers won their record-tying 17th straight game with a 24-10 victory over the Aggies on Saturday. Many circled this game as the best chance to take down Clemson, given Texas A&M’s nail-biting two point loss to the champs last year. But it was Clemson’s relentless playmaking on offense and defense that held the Aggies to their fewest points in a game since a 19-7 loss at LSU in 2015 (More on LSU later). Who can stop them? Well Clemson next week heads to the Carrier Dome to face Clemson’s recent kryptonite, Syracuse.

A late night, but a big upset: Greg Thomas kicked a 17-yard field goal with 8 seconds left, and California beat No. 14 Washington 20-19 in a game delayed more than 2 1/2 hours due to severe weather. A severe thunder and lightning storm delayed the game early in the first quarter and left only a smattering of fans waiting out the lengthy delay when the game resumed at 10:30 p.m. and finally ended at 1:22 a.m (That’s 4:22am for us east coasters).
“Certainly kicking too many field goals isn’t going to get it done for us. That was frustrating. Really frustrating,” Washington coach Chris Petersen said. Cal is 2-0 for the first time in a while and this win certainly opens things up in the Pac-12.

Speaking of the Pac-12 Trojans fans: Is there another Carson Palmer or Mark Sanchez in the works? No Trojans freshman quarterback has ever had a debut start like Kedon Slovis, who turned a tough matchup against Stanford into a celebration of his burgeoning talent. Slovis passed for 377 yards and three touchdowns in a commanding performance, and USC rolled to a 45-20 victory over the No. 23 Cardinal. Slovis went 28 of 33 and set the school record for yards passing in a freshman’s first start as the Trojans (2-0, 1-0 Pac-12) rallied from an early 14-point deficit to beat the Cardinal (1-1, 1-1) for the third time in the last four meetings. It’s been tough the past couple years for USC, but perhaps the corner may be re-turning. Mind you the Athletic office is still a mess as Lynn Swann resigned as AD. Perhaps they should hire someone who can actually do the job, instead of famous alums who bring donors and no progress.

Nebraska stumbles: Nebraska didn’t look too great in last week’s opening season win over South Alabama. This week the defense was excellent and the O-Line protected Adrian Martinez. But Colorado would not quit, and down 17-0 at halftime head coach Mel Tucker fired up his team and in OT James Stefanou’s 34-yard field goal gave Colorado its first lead and the Buffaloes beat the Huskers 34-31 when punter Isaac Armstrong’s 49-yard try sailed wide right. Martinez had a tale of two halves: He completed all nine of his passes for 180 yards in the first half. The second half included six sacks, an interception, and 7-for-15 passing for 110 yards. Scott Frost is now 0-6 on the road as Nebraska’s head coach.

Academies Update: Army almost pulled off an epic upset Saturday, forcing Michigan into overtime before the Wolverines survived 24-21. Army is 1-1 and this week is at Texas-San Antonio. Navy & Air Force had byes Saturday. This week Navy is home to East Carolina, while the Falcons will be at Colorado to face the Cinderella Buffs.

Mississippi State Rolls Despite Injuries: The Bulldogs welcomed the Golden Eagles of Southern Miss into what was an extremely hot Saturday afternoon. Despite winning the week before against Louisiana, the Bulldogs had something to prove as it didn’t play up to its potential on either side of the ball. In this game though the Bulldogs were able to clean up a lot of the
mistakes and play much much better. There were a few injury scares late in the first half as QB Tommy Stevens and RB Kylie Hill went down with injuries all in the span of about 5 plays. Hill would return and Stevens sat the rest of the rest of the game for precautionary reasons. These two will need to remain healthy for the Dogs to have the type of season they are hoping for and to face the stiff competition they have visiting Starkville next week, in the form of Kansas State.

LSU Wins Texas Shootout: With Gameday rolling into Austin, the Texas Longhorns has the ultimate chance to prove that they were in fact back, as QB Sam Ehlinger so eloquently put after their Sugar Bowl victory last season. Coming into town though was an LSU Tigers team that has
a much improved offense and have finally found that missing piece QB in Joe Burrow that has plagued them in the past. This game lived up to all the hype that it had coming into it. It was extremely back and forth as you could tell neither QB wanted to let their team lose. In the end it was Joe Burrow and the Tigers who were able to outduel the Longhorns and score a huge early season win. These two teams are definitely ones you want to keep your eyes on.

Maryland Scores Dominant Upset: Speaking of Texas, I will now move on to the team that has been able to upset them two years in a row… the Maryland Terrapins. Maryland has made a habit of these early season upsets and were looking to continue that tradition as they welcomed in the 21st ranked Syracuse Orange. Syracuse came into the season with a lot of hype coming off a 10 win season last year. Syracuse failed to live up to that hype as they were utterly manhandled by the Terrapins to the tune of 63-20. Syracuse now gets to welcome the number 1 Clemson Tigers, whom they beat two years ago and played extremely close last year. If this game against Maryland tells us anything though, it could be a long day for the Orange. For Maryland it will be interesting to see if they can build upon this early season upset, something they haven’t been able to do the previous two years after the Texas wins. If the offense can produce at the pace they did in this game the rest of the Big Ten needs to be on notice.

The Struggle Bus, Part 1: Tennessee was one of the big stories coming out of week 1, coming off their embarrassing loss to Georgia State at home. This week they welcomed in BYU hoping to avenge that embarrassment and grab a victory before they head into an extremely difficult stretch of their schedule. The Vols would lead this game by 10 at the half and actually lead for all but 1 second of regulation before BYU kicked the game tying field goal to force over time. The two teams then traded touchdowns in the first overtime period. The Vols would then settle for a field goal, before allowing the Cougars to score the game winning touchdown, losing not only their second game of the season but their second home game. The Vols are in all kinds of trouble now as after next week’s game against Chattanooga, they will play Florida, Georgia, Mississippi State, and Alabama. They will likely be looking at 1-6 after that stretch and that will not sit well on Rocky Top.

The Struggle Bus, Part 2: Another former power program that is dealing with early season struggles is the Florida State Seminoles. While last week’s loss to Boise State isn’t anything to be embarrassed about, it still doesn’t sit well with Seminole fans as they had a big lead at home and let it go. This week they welcomed Lousiana Monroe into Tallahassee hoping to get back
on the right track. Just like in their week 1 game though, they built up a big lead only for the Warhawks to battle at the way back and force overtime. Unlike the Vols above though, the Seminoles were able to escape with a 45-44 victory due to a missed extra point. As much as they were ecstatic to come away with the victory, these Seminoles need to learn how to hold onto a lead or this is going to be a long year for them and Willie Taggart’s days as head coach may be numbered.

Now in the throes of the season, the conference schedules start busting open. Let’s take a look at the biggest games this coming weekend: