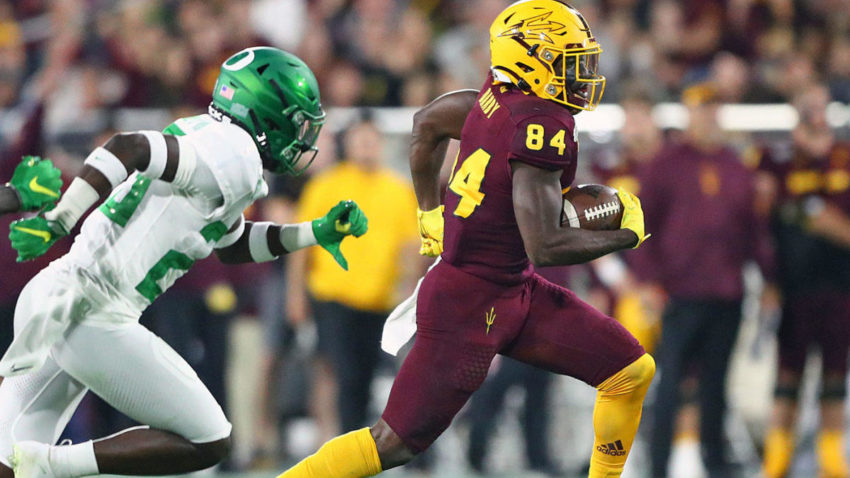 College football fans, we are officially down the home stretch of the college football season. There’s just one weekend of major regular season games left, then conference championships, and then we figure out the Top 4 to play for Clemson’s National Championship. First, let’s look back to last weekend and see what the hot takes were!

SEC Cupcake Week: Inevitably every year fans of the SEC come upon the week known as Cupcake Week. Cupcake Week always falls the Saturday before the Rivalry Week (AKA the final week of the regular season). This week is when the SEC teams schedule FCS teams to rest up and beat up on a much inferior team. This is always a point of contention with fans of other conferences teams, especially when it comes to playoff positioning. Mississippi State, Alabama, Auburn, Kentucky, and Vanderbilt were the teams that participated in it this year and all coasted to victories over Abilene Christian, Western Carolina, Samford, UT Martin, and ETSU respectively by a combined score of 251-17.

Georgia Wins Defensive Struggle: Georgia has already wrapped up the SEC East, so at this point in the season for the Dogs it is all about making sure you don’t slip up on the way to the SEC Championship. The Dogs welcomed in the Texas A&M this week in what promised to be a very good matchup and if you like defense it was exactly that. The Dogs used their incredible defense to hold down the Aggies all game and squash a late rally to come away with the 19-13 victory.

Big 12 Championship Rematch Set: When GameDay rolled into Waco a few weeks ago, it provided an opportunity for Baylor to prove that they were among the nations elite, while for Oklahoma it was a way to keep them in the playoff hunt. Oklahoma was able to come away with the victory, but we are going to see a rematch in the Big 12 Championship. Baylor was able to qualify with a win this week over Texas, while Oklahoma slipped by TCU. The rematch still has playoff implications but it is likely that both teams would need a lot of help to get there.

Utah Inches Closer Towards the Playoff: Coming into this week, it appeared that the likely matchup in the PAC 12 Championship between Oregon and Utah would likely decide the last playoff spot if both teams took care of business. Well, as my partner will speak on the Ducks did not hold up their end. The Utes headed to Tucson to play the Arizona Wildcats. Unlike the Ducks though, the Utes would dominate the Wildcats and keep their playoff chances alive and well.

Tennessee Becomes Bowl Eligible: The title of this take is something you would’ve never convinced me that I would write. The Tennessee Volunteers could not have had a worse 5 game start to the season, starting 1-4. The job Jeremy Pruitt has done with this team to get them in the position to qualify for a bowl is incredible. With this week’s victory over Missouri, they have accomplished just that. The Vols have reeled off 5 of 6 and have the chance to go from 1-4 to 7-5. Incredible job by the Vols.

Buckeyes move up: So Ohio State continues to defy the odds with a relatively young coach, amidst studs like Ed Orgeron, Dabo Swinney, Kirby Smart and Nick Saban. Right now the Buckeyes are probably the best team in the country, and after OSU’s 28-17 win over Penn State, only rival Michigan and a Big 10 Championship game they’ll likely win stand in their way to being the #1 seed in the CFP. Even without Casey Young at points this season, the defense is the best in the country. JK Dobbins is an unheralded running back, burning the Nittany Lions for 157 yards and 2 TD. The big game is Saturday in the Big House, which will have over 100,000 rocking fans. Sadly it won’t be rocking on the field. Ohio State should beat Michigan handly.

Ducks get speared by the Sun Devils: Utah has officially replaced Oregon as the hot Pac-12 team on the trail of a playoff spot. Oregon has been banging their drum all season after losing a heartbreaker in Week 1 against Auburn. Then they ran into Jayden Daniels. The Arizona State QB threw for 408 yards on just 22 completions and 3 TD as ASU upset the Ducks 31-28, effectively ending Oregon’s chance for a playoff spot. Justin Herbert threw for 304 yards with 2 TD, but also threw two costly interceptions that killed Oregon drives. The Ducks will likely face the Utes in the conference championship for a date in Pasadena.

Gophers still alive: Minnesota’s 38-22 win over Northwestern puts them at 10-1, and a legit chance at a playoff spot. Tanner Morgan threw 4 TD and the Gopher defense continues to bend but not break. Right now it would be Minnesota and Ohio State in the Big Ten Championship, if OSU beats Michigan and the Gophers can beat #12 Wisconsin at home. Neither game will be a cakewalk, but Minnesota has proven they can step up in a big game. If I were the Buckeyes, I’d do my business with Michigan and get ready because these gophers have nothing to lose.

Irish still fighting for a New Year’s bowl: After those two forgotten weeks where they got blown out at Michigan and then fucked off for three quarters against Virginia Tech at home before winning by 1 point, the Irish seem to have righted the ship. They’ve crushed Duke, Navy and this past week a 40-7 win over fellow Catholics Boston College. Ian Book had three TD’s and has looked fairly solid again after that deplorable performance in Ann Arbor. That loss is looming large against Notre Dame getting a New Year’s Day bowl. Right now they’re slated to face Texas on December 28 in the Camping World Bowl in Orlando. ND would like to upgrade from that. Even if they beat Stanford Saturday and finish 10-2, that’s not a guarantee of anything.

Academies Update: Army had off last week after back to back blowout wins over UMass and VMI. This week they play at Hawai’i to try to even their record at 6-6 and be bowl-eligible. After getting crushed by Notre Dame, Navy rebounded to beat ranked SMU 35-28 in Annapolis. The 8-2 Middies are at Houston this week before the big game with Army, Air Force is 9-2 after a 44-22 win over New Mexico and finish their regular season Saturday at home against Wyoming. On December 15, the Army-Navy game will decide the CID trophy.

So here’s the updated CFP standings:

Now for this weekend’s biggest games, including on the greatest rivalries in sports, all games Saturday unless noted: