When we last checked in on the Big Ten, Nebraska was giving up 70 points to a five-loss Wisconsin team in the Big 10 Championship game while undefeated Ohio State sat on the sidelines without any postseason avenues. This season Urban Meyer’s crew is back and is a National Championship contender. How does the entire conference stack up as expansion looms? Today we take a look at the Legends division.

Roster Breakdown: A solid Michigan team returns six starters on each side of the ball and while there is some roster turnover, the strides the defense made last year should carry over to 2013, and a full season with Devin Gardner at QB could spark the Wolverines to a Big Ten championship.  The offensive line is a little green but the skill positions for the Wolverines are extremely talented and they have a nice amount of depth.

Schedule: The Wolverines host Notre Dame in week two and then have a gauntlet from November 2nd to November 16th (and they should be undefeated at this time) before still having to face Ohio State to close out the season.  They travel to Michigan St on the 2nd, then have the big Nebraska game at home but have to go back on the road in a big letdown spot against Northwestern the following week.  Should they come out of that stretch with just one loss, they’ll be in good shape to represent the Legends in the Big Ten Championship game.

Better or Worse? Last year’s team lost to Ohio State by five (on the road) and lost to Notre Dame (also on the road) by seven after opening the season against the defending champ Alabama in a blowout opening loss.  The team should definitely improve on their eventual 8-4 regular season record this year.

Final Thoughts: I like Brady Hoke and what Devin Gardner brings to the table for a full season under center. If the Wolverines can get past Notre Dame, they’ll have enough time to gel before the big November Legends games.

Roster Breakdown: The Cornhuskers, last seen giving up 70 points to Wisconsin and 45 points to Georgia, bring back just four defensive starters from the 2012 team.  Fortunately the offense, which is extremely talented, brings back quarterback Taylor Martinez and runningback Ameer Abdullah.  A seasoned offensive line should help Nebraska put up big points this year.

Schedule: The Legends division is extremely tight but Nebraska has the easiest schedule of the four top teams as they avoid both Ohio State and Wisconsin.  Their lone away game challenge is at Michigan, sandwiched between two home games against Northwestern and Michigan St. That stretch from November 2nd through 16th will go a long way towards crowning the Legends division winner.  Nebraska’s out of conference schedule features a return bout with UCLA (which they dropped last year) in Lincoln.

Better or Worse? Nebraska’s two-loss regular season from last year’s campaign is easily replicable and probably an “at worst” scenario given their schedule.  Will their postseason performance improve? That’s the big question should they meet up with Ohio State in the Big Ten Championship game.

Final Thoughts: The Cornhuskers should cruise into November undefeated and given how their schedule breaks down, they have a great shot at making the Big Ten Championship game again. The defense is definitely going to be challenged but senior QB Taylor Martinez should guide an explosive ship to big points again this year.

Roster Breakdown: 2012 was a step back offensively for the Spartans but after a down year, the roster coming back is loaded with 15 returning starters including quarterback Andrew Maxwell.  The defense, which was nails last year and only giving up 16 ppg, returns seven starters in what should be one of Mark Dantonio’s better units.

Schedule: The Spartans draw Notre Dame out of conference but avoid both Wisconsin and Ohio St and could be 8-0 before they face Michigan on November 2nd.  It will be tough to gauge how good they really are since they get a slate of Iowa, Indiana, Purdue and Illinois to kick off the Big Ten schedule but given the talent and coaching, I think they can win that game before going into a much needed bye before closing out at Nebraska and Northwestern

Better or Worse? Last year’s 7-6 record included a bowl game win against a down TCU squad and things should look much better in 2013.  I could see the Spartans losing just two games and finding themselves (much like other teams in the Legends division) right in the thick of a Big Ten title.

Final Thoughts: I love how the Spartans stack up for 2013 and they are definitely one of the better teams in the Big Ten.  As with Nebraska, Michigan and Northwestern, it is a loaded conference where any misstep could cost any of those teams a chance at the Big Ten title. Michigan State has a solid schedule and if they can win the big rivalry game against Michigan they are sitting very pretty.

Roster Breakdown: This may be Pat Fitzgerald’s most talented team as the Wildcats bring back 15 starters overall including their QB corps from last season. The offensive line is a little light but the skill positions on offense are stacked to go with another year of solid defense.

Schedule: Northwestern fetches Ohio State for homecoming early in the season (and off a bye) and they may have a puncher’s chance there. It’s a challenging schedule but not laid out to be too daunting as they get a big bye week between Nebraska and being home for games against Michigan and Michigan St.

Better or Worse? I think a 9-3 regular season is doable again and the Wildcats will certainly be in the mix for the Legends division title. Having to play both big guys from the Leaders (at Wisconsin follows Ohio St) makes it tough to improve on last year’s record.

Final Thoughts: Northwestern should be a fun team to watch this year and it’s always easy to root for an underdog school like NW. Well-coached and deep from an experience standpoint, it should be another great year for the Wildcats. 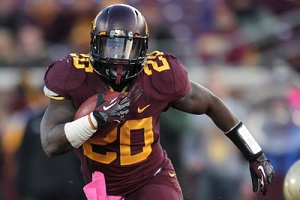 Roster Breakdown: Jerry Kill’s third season at Minnesota sees a bevy of offensive talent returning.  Ten offensive starters in all is a nice cushion to start the season with for the Gophers. The defense was pretty pedestrian in 2012 and but they return six starters there including three of the four on the d-line.

Schedule: The Legends division is stacked and Minnesota draws Wisconsin and Penn State from the Leaders (but both are in Minnesota). They could start the year 5-0 if they win their homecoming game against Iowa on September 28th.  Things get tough from there with road games at Michigan, Northwestern and eventually Michigan St.

Better or Worse? The Gophers finished 6-6 in 2012 before dropping their bowl game to Texas Tech.  They should be improved this year, potentially winning seven games (if they can top PSU) and making another bowl game.

Final Thoughts: I love teams that bring this type of experience back and it will be interesting to see how the Gophers do when they finally hit the Big Ten road schedule in October. They have a decent amount of polish on offense and should be a tough out this year.

Roster Breakdown: Kirk Ferentz’s 15th (!) season at Iowa brings back a modest amount of talent as the tem looks to rebound from a porous 4-8 2012 season. They’ll break in a new quarterback but the defense brings back seven starters from a solid squad.  They should certainly see an improvement as they look to get back to their consistent winning ways of the last decade.

Schedule: Iowa draws Ohio State and Wisconsin from the Leaders and close out their season with six of seven games against the best teams in the Big Ten. After facing Iowa St, a key barometer game will be at Minnesota on September 28th.  After that the aforementioned gauntlet of Big Ten toughies hits and Iowa will be hard pressed to win more than the Purdue game.

Better or Worse? I’m going with an exact 4-8 record again this year for the Hawkeyes.  They should be competitive defensively but I don’t see how the schedule breaks for them to be bowl eligible in 2013.

Final Thoughts: I’ve always been a big Ferentz fan and his teams were constantly prepared and always a tough out.  It’ll be another rebuilding year in Iowa City but I never completely sleep on an Iowa team pulling a surprise or two.