Mention the phrase “1995 WWF” to wrestling fans and watch their eyes immediately glaze over from boredom. The roster was filled with cartoon characters, the booking littered with missed opportunity, and the television programs were canned and milquetoast at best. The Rock ‘N’ Wrestling Era was deep in the rear view mirror, and the company looked dramatically different than it did just 18 months earlier. But I didn’t care. I loved it all still. 1994 was a major year in my wrestling fandom as I attended my first PPV, had really built up a solid core of wrestling fan friends and even launched the infamous WCF in my backyard. As we rolled into 1995, we were still obsessed, talking about it all the time. Monday Night Raw was appointment TV for me regardless of the card. With WrestleMania XI approaching and WCF Winter War just past us, I was all-in on the world of wrestling.

Coming out of his Royal Rumble win, Shawn Michaels was pegged as the next big superstar, finally ready to cash in on his seemingly unlimited promise and potential. Set for a collision course with former friend and muscle Diesel at WrestleMania, Michaels decided it was time to once again employ a bodyguard to watch his back. He claimed that he was a marked man by everyone in the promotion after he ran through the roster at the Rumble, and he wanted to take no chances as he prepared himself to become World Champion. As February dawned, Michaels teased that it was time to call on some protection, sparking rumors amongst viewers of who the bodyguard would be. Now, this was pre-Internet for a majority of fans, so unless you were Rick Scaia, CRZ, the Netcop or Al Gore or subscribed to the Wrestling Observer Newsletter, you were shit out of luck regarding rumors for the most part. And I say for the most part, because there were a couple of other options out there, options of which I took full advantage.

In early 90s New England, there was a skullet-laden savior in deck shoes named Cody Boynes that helped us through these dark days. At first, there was a static-filled radio show on Sunday evenings where Cody broke news about a potential Demolition return and other unbelievable facts and figures. I couldn’t believe this goldmine I found and was sure to listen to each week until it vanished from the dial. Around 1992, I stumbled into Cody again, this time on local public access TV. Cody was chilling in a local station studio and would read news, notes and rumors from around the wrestling world. It was years later that I realized he was just reading the WON directly to his viewers, but whatever, it was awesome. It aired midday during the week, so in the summer it was must-see TV for me and during the school year, my VCR was programmed to catch the updates. Cody would even have local Indy and backyard wrestlers on as well to help push the local scene. I was a public access junkie at this point, and it was one of my favorite programs to watch. Soon enough, Cody only popped up randomly, often in repeats or way behind the times before he vanished again and I was left to fish for my own news if I wanted it to be fresh and come more often than once a month. Enter…Journal Line.

Being such a tiny state, Rhode Island doesn’t have many options for media compared to others. Sure, each town or city had their own very local paper, but the Providence Journal was the main source of news from Westerly to Woonsocket. They weren’t much for wrestling coverage, but every now and then there would be an article (or obituary) or two when the WWF was coming to the Providence Civic Center, which they routinely did at that time. By 1993, the paper also created Journal Line, a free dial up hotline that provided news updates, real time sports scores, soap opera news…and wrestling rumors! Yes! What were the odds? I vividly remember Josh Richer and myself dialing in furiously on a May Saturday afternoon to find out if the Denver Nuggets became the first #8 seed to win a playoff series as they battled the top ranked Seattle Supersonics in a tight first round series. We high-fived when we heard the score. And that was fantastic. We weren’t able to watch the game and now we didn’t have to wait for Sportscenter or the news to tell us what happened because Journal Line took care of it. It was an amazing time to be alive. With the 2/20 Raw and the reported revelation of Shawn Michaels’ bodyguard inching closer, I anxiously punched in the Journal Line number and wondered if the identity would be revealed. 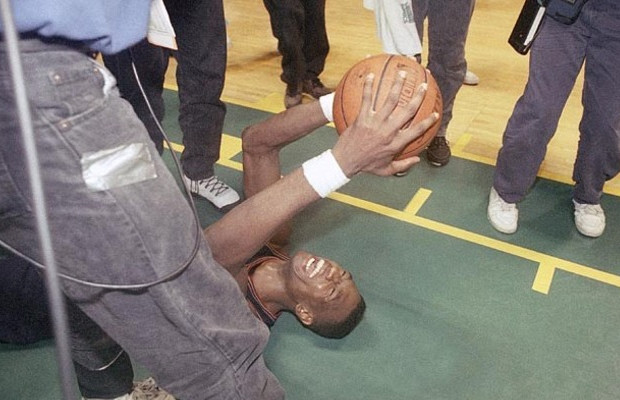 About 15 minutes into the show, Shawn Michaels’ music blared over the speakers and the Heartbreak Kid sauntered down to the ring to chat with Jerry Lawler in the King’s Court. After teasing things for a few minutes, Michaels officially revealed his new bodyguard to the world: The Big…The Bad…The Vicious…SID! Sid was back in the WWF after leaving the company nearly three years earlier. He had a year long stint in WCW in 1993 but had vanished after he was fired for stabbing Arn Anderson with scissors during a hotel brawl. Outside of the odd mention in one of the Apter Mags, Sid was completely MIA for most wrestling fans. Until this night in Macon, GA, that is. The longtime fan favorite returned, and he would be protecting Michaels against all his jealous attackers on the road to WrestleMania. As the big man marched out with no shirt and a pair of mom jeans on, the possibilities seemed endless. The excitement was palpable. Sure, we all know that 1995 would end up being a very rough year for the Vicious one, but on that night in Macon, it was awesome to be a WWF fan. The shock the fans experienced was what made us all wrestling fans…for the most part. I wasn’t shocked at all. Because I knew. Journal Line spoiled it for me. And as soon as I found out during that phone call and got really excited, a feeling of sadness warmed over me at the same time. I realized how cool it would have been to be surprised when Sid marched out instead of having some droning intern tell me over the phone. That magic moment could never be brought back for me.

For the rest of 1995, I tried to avoid Journal Line unless a potential storyline really had me hooked and I needed to know the details. I remember calling to get as much information as I could about Lawrence Taylor and if his issues with Bam Bam Bigelow were legitimate. I know I was so intrigued about Goldust that, despite my personal ban, I called in to find out his identity ahead of time. By early 1996, I was officially part of America OnLine as HRace34 and the floodgates blew open. I was all-in on insider news and rumors and it was dangerous, because it was a time full of rogues when false rumors spread like wildfire. I foolishly believed the tale that Yokozuna would be defeating Shawn Michaels for the World Title on a May 1996 Raw and was surprised when nothing of the sort occurred. It was a harsh lesson to learn early in my life as a somewhat insider. 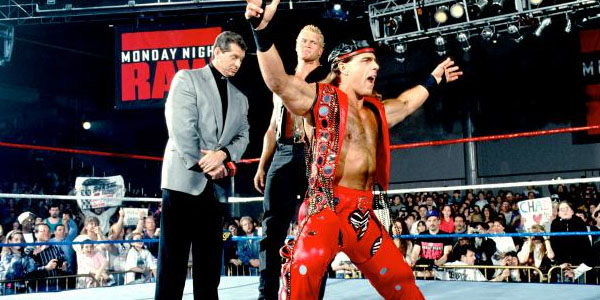 Every corner of our wrestling community ponders if life would be better like those old days before everything was spoiled. Then, we were more concerned about why Jake Roberts turned on Ultimate Warrior as opposed to caring if Roberts was being turned heel to job out against the wishes of the fans. I am not sure there is a right or wrong answer either way. Both have their merits. All I know is that sometimes it is worth the trip back in time to help us remember why we love and are so dedicated to this insane sport. And sometimes, even now, regardless of how much we know ahead of time and how many spoilers we read, we can still be swept up in the magic of pro wrestling. That is why we still watch.