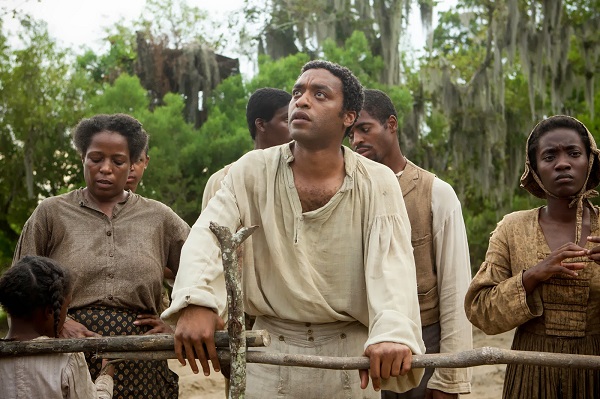 The Unfair Treatment of a Free Man

The story of Solomon Northup is one of true heartbreak and triumph. The story of a free black man in the 1840s who was tricked into slavery and forced to live with the knowledge that he should have never been there in the first place. This is an all-star cast lead by Chiwetel Ejiofor as Northup and Michael Fassbender as Edwin Epps. Fassbender’s Epps is a ruthless plantation owner who plays the heel top to bottom. His presence on the screen is something that will turn heads and stir your emotions. Benedict Cumberbatch plays plantation owner William Ford and puts together a great performance that continues to exhibit why he is a true up and coming leading man in film. Lupita Nyong’o plays a slave named Patsey who is beautiful and broken in every sense of the word. Paul Dano plays a plantation worker John Tibeats and makes you cringe at every moment you see his face. Paul Giamatti makes a small camero as Theophilus Freeman and of course producer Brad Pitt plays a Canadian worker named Samuel Bass. I said it in my American Hustle review that Bale and company may have been the best ensemble cast of the year, but the 12 Years ensemble gives them a serious run for their money. As of this writing, the film won the Golden Globe for Best Motion Picture-Drama and had been nominated for 9 Academy Awards including Best Picture, Best Director (Steve McQueen), Best Actor (Ejiofor), Best Supporting Actor (Fassbender), Best Supporting Actress (Nyong’o), and others. After viewing this film for the second time this year, I can honestly say it is a trying tale that will have you on the edge of your emotional seat, waiting for triumph to overcome the hell that Northup has to go through.

The story itself comes from a memoir by Northup and doesn’t go without controversy. The entrapment of Northup in Washington DC leads to his freedom being taken away and then his sale into slavery sets the stage for the film. There is a good pace for the film and before too long the film starts to take shape. After Northup’s capture he is sold to Freeman (Giamatti) and has to undertake the new name of Platt. Freeman then moves to sell his new property to a plantation owner by the name of Ford (Cumberbatch). It is Ford’s humility that is enlightening to see while Giamatti treats the slaves as nothing more than tools for the trade. Once on Ford’s plantation, Paul Dano’s John Tibeats makes his debut and from the beginning there is not one likeable characteristic about this individual.  Everything about his is slime and filth and he is one of the most hated characters I have seen in a film in a long time. Northup’s time with Ford is a roller coaster ride of ups and downs while Ford can see that there is more to Northup than meets the eye.

One of the things that Steve McQueen does so well in his movies is set the stage with the music. There is a moment during the early part of the film in which Solomon’s life is being threatened and the score really drives the moment home. This is much like the movie Shame (also directed by McQueen and starring Fassbender) and helps the overall feel of the film and the theme of the story. On the same note, there are also points of the film that McQueen has silence and focuses the camera on a character. At first these moments can seem uncomfortable, but they give the viewer an opportunity to breath with the character and regain what is going on in his or her current situation.

As Northup’s situation changes, he finds himself on the plantation of Edwin Epps, played by Michael Fassbender. As I stated earlier, Fassbender is a vicious and ruthless plantation owner. Fassbender is known as a slave breaker and his ways are unjust and hard to watch. It is at the Epps’ plantation that Northup meets Patsey (Nyong’o). Patsey is a strong character that is one of the best workers on the plantation. Her will however is broken due to the treatment of Epps who views her as his prize for work and pleasure. Epps walks this fine line of torture for purpose and pleasure and is one of the most unpredictable men in the film. He seems to enjoy the misfortune of those in his stead. Sarah Paulson plays Mary Epps, the wife of Edwin who is enraged by Edwin’s fascination with Patsey and goes to all lengths to remove her from the plantation. Mary also has hatred in her heart and demonstrates her hatred by a silver tongue. Northup spends the majority of his time in the film on this plantation and struggles to survive the life he has been forced into.

Solomon finds himself in struggles with many different individuals throughout the film but also with himself. His inner turmoil of trying to stay alive both on the outside and the inside so that one day he can find hope in his life again. This struggle keeps the movie going and there is always that glimmer of hope that good will rise and Northup will find his way to salvation and be rid of this hell he has been forced into. The film chronicles these challenges and chances for Solomon to find a way to freedom in a grand fashion. Brad Pitt’s Samuel Bass character is a Canadian man who is anti-slavery and he and Epps don’t see eye to eye. Bass and Northup have an important conversation and he is the man who Northup has been waiting for. A man who can see the injustice that has befallen him. Bass is a man who can somehow help this misfortunate situation. The final pieces of the movie provide an emotional jolt that you wait for from the opening scene.

Fassbender’s performance as Edwin is not as over the top as Leonardo DiCaprio’s Clavin Candie in Django Unchained, but both performances have a high energy and a viciousness that makes them appealing and appalling in the same way. Chiwetel Ejiofor’s performance as Solomon Northup is also fantastic and he allows the viewer to see his struggle and suffering. He knows he is a free man but he can’t change his situation as much as he tries. Nyong’o also does an amazing job in capturing the character Patsey. She may be the one who suffers more than anyone else in the entire film and she makes the suffering real. Pitt’s Bass plays an important role in the film but it also doesn’t take away from the focus that is on Solomon Northup. As a whole, the cast and crew put together an amazing performance and a film that was enjoyable to watch but frightening to think about. The harsh reality of this situation is true and the film only shows a glimpse into what life was like for individuals who had to suffer through slavery.

As the Academy Awards approach, I have no doubt that this film will walk away with prestigious honors. When I first saw the film, I was shaken by the harsh reality of the situation and after seeing it again that emotion is still there. Northup’s story is told so well by some of the best in the business right now and this film will go down as one of the better ones of the year. When I originally watched the film, it was ranked number 7 on my list of the best 20 this year and after watching it again, I find myself moving it up to number 5. The emotional roller coaster and acting really make this movie something to see and experience.

Thank you for joining me for this review of 12 Years a Slave – The Unfair Treatment of a Free Man. Please stay tuned to the Place to Be Nation for more movie reviews and also my look at the nominees for this year’s Academy Awards. If there is a film you’d like to see me review, please let me know. Here is to 2014 and the movies!